Baby Clay: The Birth of a World Record

As a small-town college student in the early 1980s looking for summer employment, I had no idea just how far my first job in the brick industry would take me. As a newly hired laborer in the brick plant, I found myself packing brick by hand, sweeping floors, and spraying coatings on brick. In two years, I became a coating foreman. That led to management, sales, running one brick plant, and eventually overseeing the sales of multiple plants in my years at Glen-Gery Brick. I became President of a brick distributor in South Bend, Indiana in 2000 and oversaw Architectural Sales. Later, I co-founded a brick staining company that I still own and operate today. It’s safe to say that I have been intimately involved with every aspect of the brick-making process. At the time of this writing, I have over 38 years of experience in our industry. By February of 2020, I thought I had seen pretty much everything in our industry. But that was before I had the chance to lay my eyes on one very sizable brick named Baby Clay.

While brick can be made in a multitude of different sizes, textures, and colors, brick has limitations when it comes to size and shape. Brick is most commonly produced in rectangular shapes so they can be manufactured and stacked efficiently throughout the brick-making process. Not only do brick manufacturers strive to be efficient with costs, materials, and stackability, they also have to consider how the brick can be laid into a wall.

A popular standard brick size when I started in the industry was 8” x 2 1/4”. It’s hard to find that size anymore unless it is a special order. Today the modular size brick (7 5/8” x 2 1/4”) is more common. This change made brick slightly more difficult to match for masons and restoration companies, especially when repairs were needed. The brick manufacturers liked the new “modular size.” It allowed them to use fewer materials, and the smaller brick dried more quickly and fired faster. Simply cutting the standard brick length by 3/8″ allowed brick manufacturers to significantly save time and lower costs. 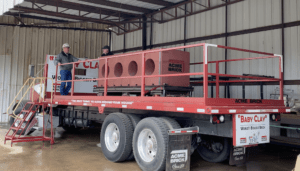 Speaking of “king-size” brick, in February of 2020, I had the opportunity to see the Acme Brick Company’s brainchild, “Baby Clay.” Just shy of five tons, Baby Clay weighs in at a hefty 9,300 pounds. Measuring 9’8” (116”) in length and 3′ 3” in height, it has a bed depth of 3’3”. At three thousand times the size of a standard brick, Baby Clay is not to be trifled with. When I first learned about this immense brick, I took a step back. Reflecting on all of my years of brick making, I tried to fathom the engineering and planning for such a feat. Was this even possible?  How did Acme pull it off?

Typically, you can dry a standard size brick in just a few days. Baby Clay earned its name due to the nine months it took to dry and be ready to fire in a kiln. Due to its massive size, Baby Clay could not be moved without being damaged. So the Acme Brick team built a dryer and kiln around Baby Clay at their Denton, Texas plant. Baby Clay was a dream of Acme Brick’s Marketing VP to celebrate Acme’s 116th birthday as a company in 2007. Its 116 inches in length represent the 116 years Acme has served the community, the country, and the brick industry.

Anyone handling brick knows that often within the same run, brick can and do vary in size. Some brick plants extrude brick as long as 8 1/4” or 8 1/2” when green, which shrink to an 8” length after it is fired. Of the many variables in the brick manufacturing process, several affect shrinkage. Each of those variables needed to be calculated for such an enormous brick to shrink, when dried and fired, to exactly 116” in length. It wasn’t easily done; it took five tries to get it right! What even made it more challenging was that Acme brought in clay from all of its 23 plants to make Baby Clay. One clay source would have been challenging enough, let alone 23! But for the Acme Brick Company, it was important to have all their plants represented, regardless of the difficulties involved. Their can-do attitude has been an inspiration to me, as well as their skill and success that followed.

Baby Clay now rests securely on its own specially retrofitted truck, and it has traveled in parades and visited Acme Brick plants and sales offices in cities all over the United States. Acme Brick’s Baby Clay was even certified by the Guinness Book of World Records! It is, in fact, the world’s largest brick!

We have all heard the cliche, “records are meant to be broken.” While the cliche may hold for some, I do not foresee it in my future. Yet Baby Clay is proof that the impossible is still possible. With enough determination, dedication, hard work, and a can-do attitude, your dreams are possible too! We are in such a great industry with great people. Together, we can keep #MasonryStrong!