Oakland University (OU) resides in the small city of Rochester, Michigan, a mere 16 miles outside of Detroit. Students partake in several studies, from art and medicine to everything in between. The campus features sprawling green lawns, a picturesque lake, and now, a vibrant new engineering center.

The school developed the idea in 2007 as it looked into increasing enrollment in its STEM program. With $30 million provided by the state of Michigan and an approximate cost of $74.6 million — the remainder generated through various university bond proceeds — the 149,879-square-foot building will offer an innovative hands-on approach to engineering education.

After a year of programming, design, and construction documentation, the project broke ground in October of 2012. The L-shaped building, which sits adjacent to the existing engineering school, is five stories high on one side and two on the other. Brick and metal complement the curtain wall facade, leading to a bold and inviting look.

The two-story wing features a high bay laboratory space, with a support area on the first floor and classrooms on the second. On the five-story side, the first floor offers a large auditorium. One story up is more student interaction spaces, a small dining facility, a bagel shop, the primary advising area, a clean room and spots for university clubs. The third, fourth and fifth floors house a stacked laboratory wing, classrooms and faculty offices.

The building, located on the south end of campus, is the gateway to the university. Broad exterior stairs bring students up from the parking deck into the school as a whole. The project marks a new era for Oakland University, with an emphasis on accommodating the growing number of students pursuing research and taking courses through the School of Engineering and Computer Sciences.

The goal of the structure is to enhance applied learning, allowing the university to engage learners coming into the program from high schools. Engineering is a very demanding program, one that requires a lot of math and science. As a result, students often get bogged down and don’t have the opportunity to do what they want — engineering. The Oakland University Engineering Center (OUEC) provides a balance for both.

As part of the project’s educational role, faculty and students can conduct research through an energy dashboard. They’ll have access to data from the building’s trigeneration and chilled beam systems and can monitor energy use. They can also propose improvements to the operation sequence. 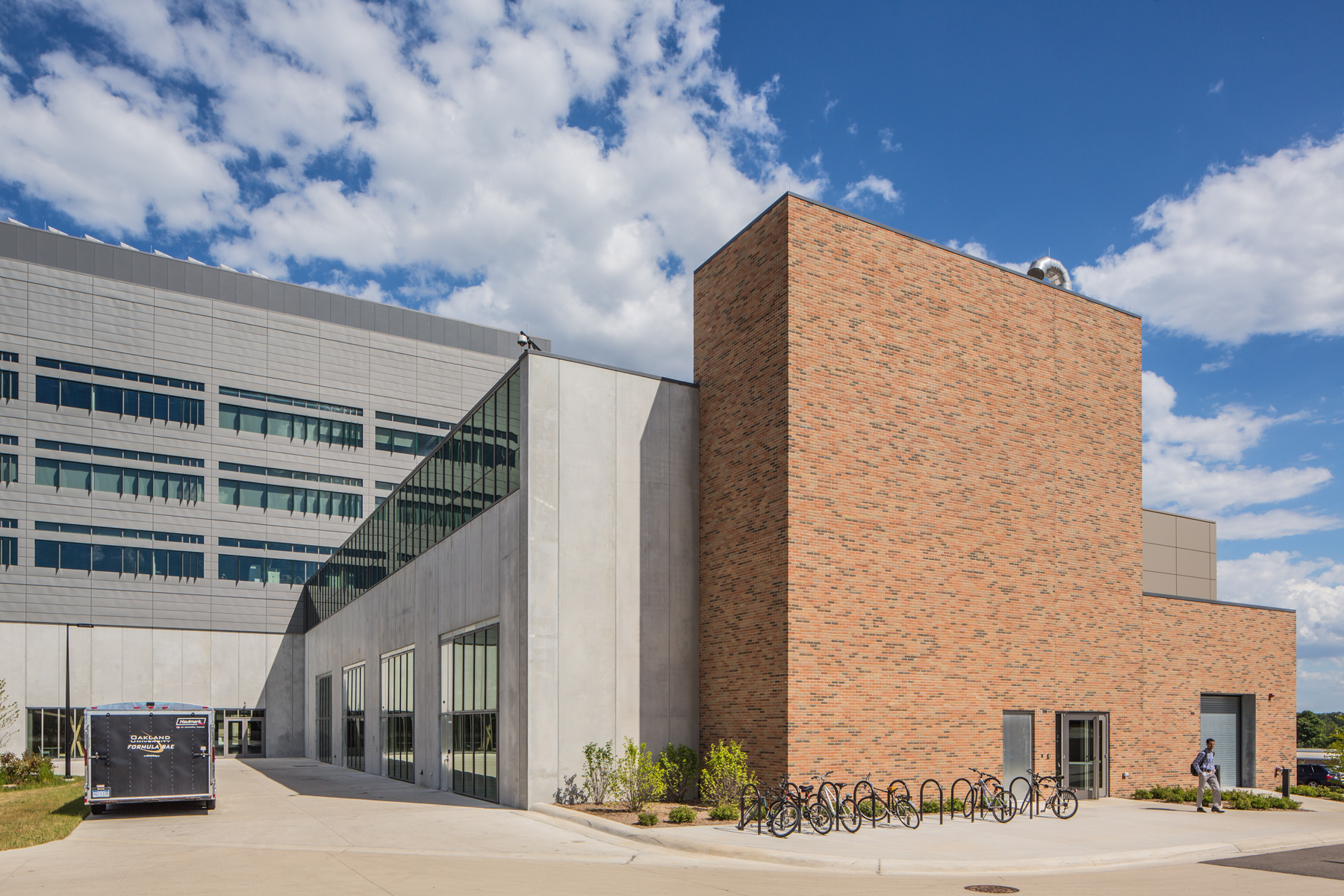 The project will allow students to experience numerous hands-on activities in robotics, industrial sciences, alternative energy, and automotive and biological engineering. About 42,000 square feet of space is dedicated to classrooms, while more than 34,000 square feet make up office, research, and general-purpose areas.

Team-based learning and collaboration spaces will support a variety of interdisciplinary projects. Students will be able to quickly reconfigure rooms to aid group projects and study. Plus, the lobby acts as a demonstration place, with windows that offer views into project labs and put research initiatives on display.

Praise for Innovative Design and Construction

The design and construction of the Oakland University Engineering Center make it a contender for LEED Gold certification. While natural gas generates a portion of the building’s electricity, recovered heat provides heating and cooling, hot water and emergency power. With an additional chilled-beam system, heat pump and 21.6kW of photovoltaics, the setup is entirely unique.

The building has won multiple accolades since its completion. The American Society of Civil Engineers’ (ASCE) Architectural Engineering Institute (AEI) offers awards to structures that exhibit high levels of originality, character, collaboration, sustainability and effective use of technology. The group presented 15 AEI awards in 2016 to organizations across the country. The Oakland Engineering Center won two, for mechanical systems design and electrical system design. 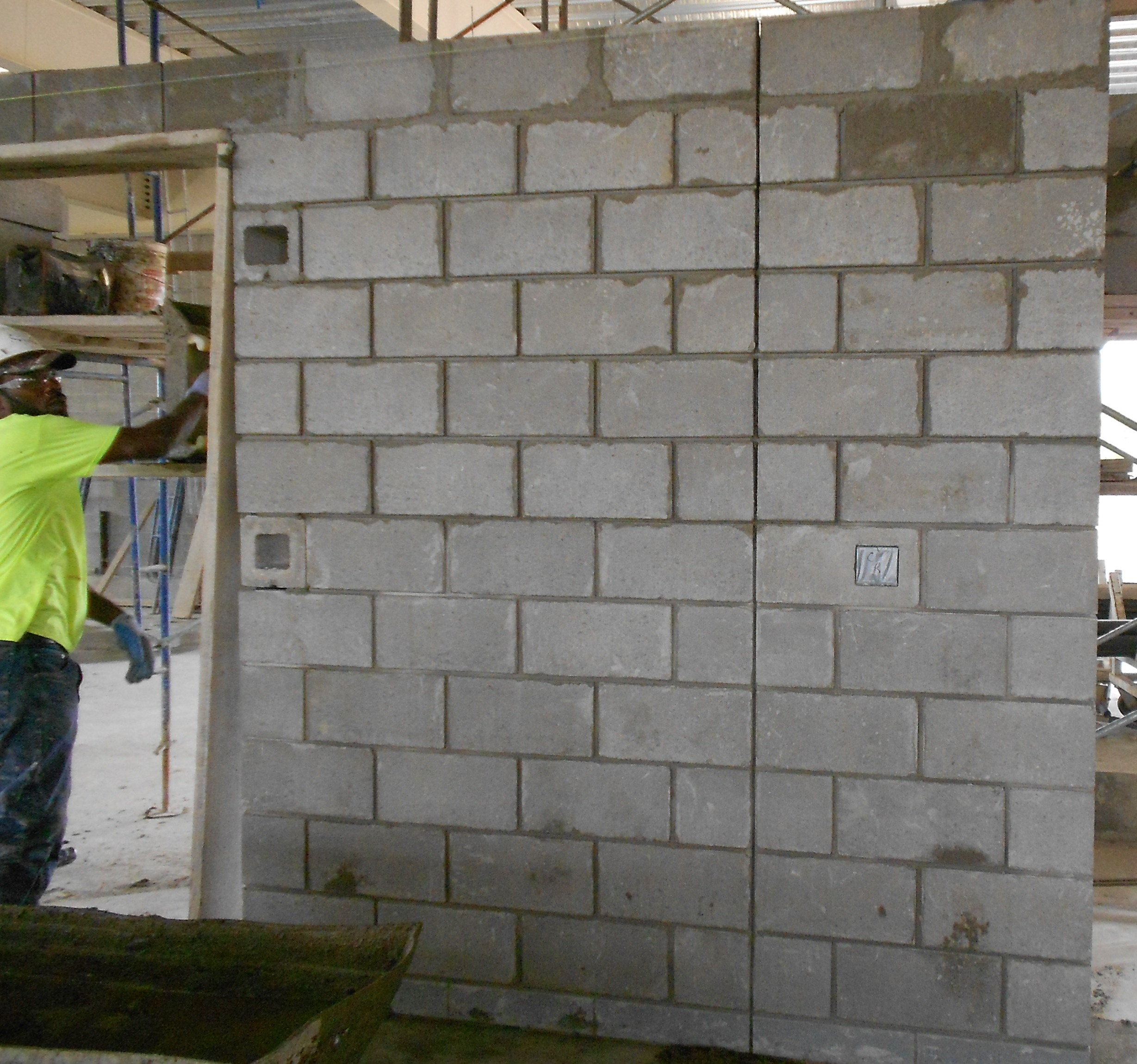 Earlier that year, the American Institute of Architects (AIA) Michigan also presented a 2016 Building Award to SmithGroupJJR, the university’s architectural and engineering firm on the OUEC project, and construction contractor Walbridge.

Architectural Leaders in Michigan and Beyond

SmithGroup, a full-service architectural and engineering firm established in 1853, took the lead on the project. Paul Urbanek, the brand’s vice president and corporate design director, says the firm took on the architecture, engineering, site work and interior. Urbanek previously served as the lead designer on world-class research labs, academic buildings, museums and more, including the Facility for Rare Isotope Beams at Michigan State University.

While the team used some hand drawings to map out the design, they also relied on programs like SketchUp and Revit. To complete the rendering and visual imaging, they relied on several different tools.

Leidal & Hart, which operates in Michigan, Ohio and Indiana, served as the mason contractors on the project. Their past accomplishments include the Compton Family Ice Arena at the University of Notre Dame, Oakland University’s Elliott Carillon Tower, The University of Michigan Football Stadium and more.

Walbridge, a full-service construction company based in Detroit — one with experience on projects with budgets exceeding $1 billion — took over construction management.

While the conclusion of the project resulted in a striking, cohesive structure, the team faced a few challenges along the way. The building’s designated spot was right in between several other buildings, an area prone to foot traffic. During the project, Walbridge controlled traffic around the site. 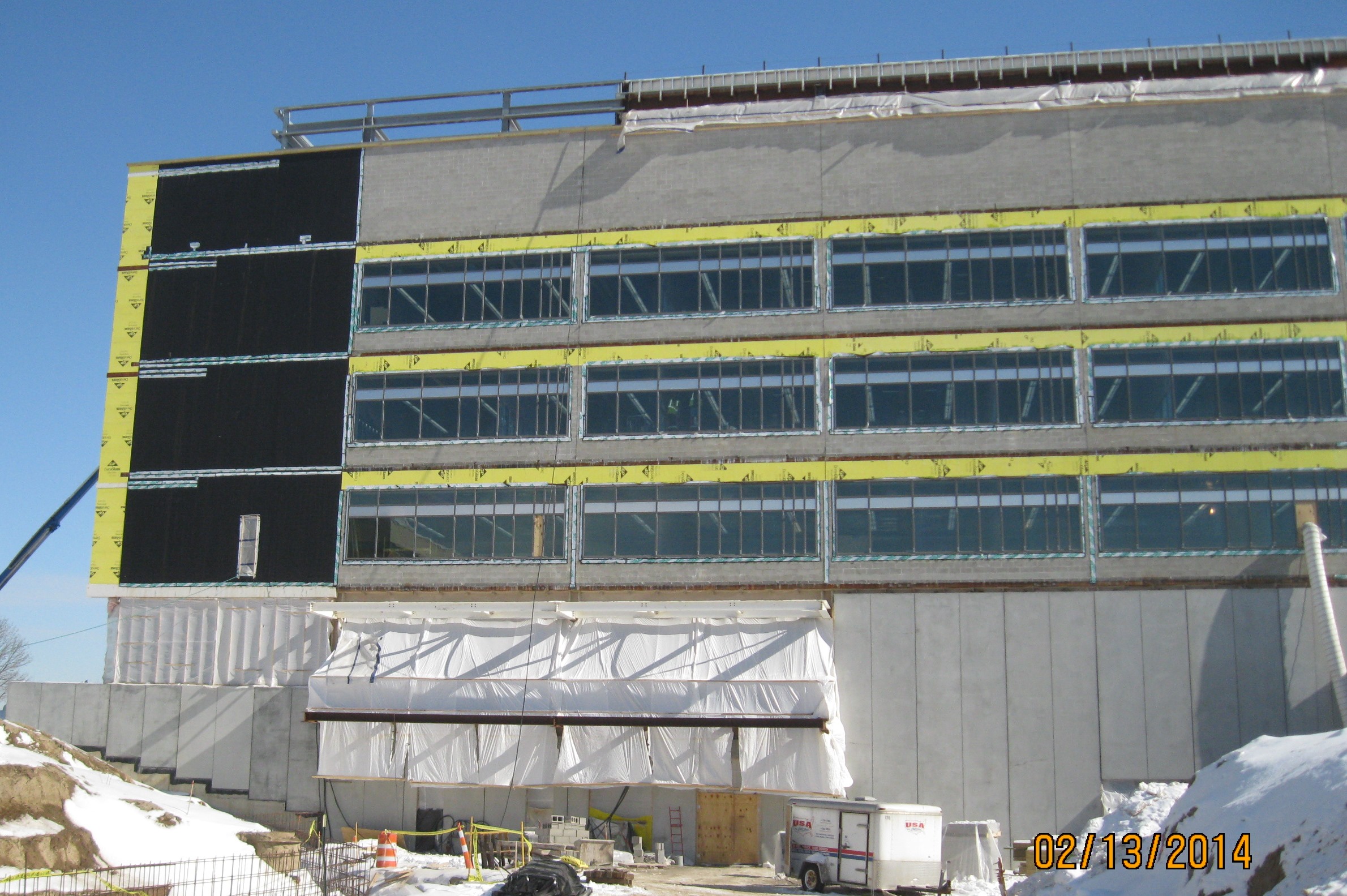 The group also had to make the design mesh with the university as a whole and stand out on its own. At the same time, it had to adhere to a strict budget. To save on costs, Wallbridge suggested swapping prefabricated fireproofed steel columns for standard structural steel, materials that were just as effective but roughly $250,000 less.

While innovative and practical, the mechanical equipment installed in the new Oakland University Engineering Center creates buzzing sounds. To prevent these noises from disrupting students and faculty, the construction company installed floating floors to isolate vibrations.

In the future, the university may wish to expand the building, something that the 450 auger cast pile installed in the building’s foundation will allow for. Plus, the use of digital documents and building information modeling (BIM) will regulate all new systems.

Urbanek claims the building had to somewhat match the design of the old engineering structure, including the campus standard of reddish-orange bricks. The exterior of the project is brick masonry, prefab concrete, curtain wall and metal panel. The interior for the laboratories, however, is primarily a concrete block.

The group designed the laboratories as a robust chassis in a very rough or raw state. They feature unpainted concrete block walls, concrete floors and exposed ceiling structures. Engineers can then come in and fit the labs with whatever materials and equipment they need, with their work becoming the aesthetic.

Urbanek says the raw look probably wouldn’t work for other types of schools, as it’s very much defined as an engineering school. Students can go in and do what they need to do inside the space, as there’s no architecture standing in the way. This concept also bodes well for durability, as engineers need stable surfaces to work on.

The base of the building, which is very strong, is all masonry. The metal panels and cantilever give it a persistent presence on campus. This pretty, tall structure ties in nicely with the rest of the university, leading to a sense of cohesion. 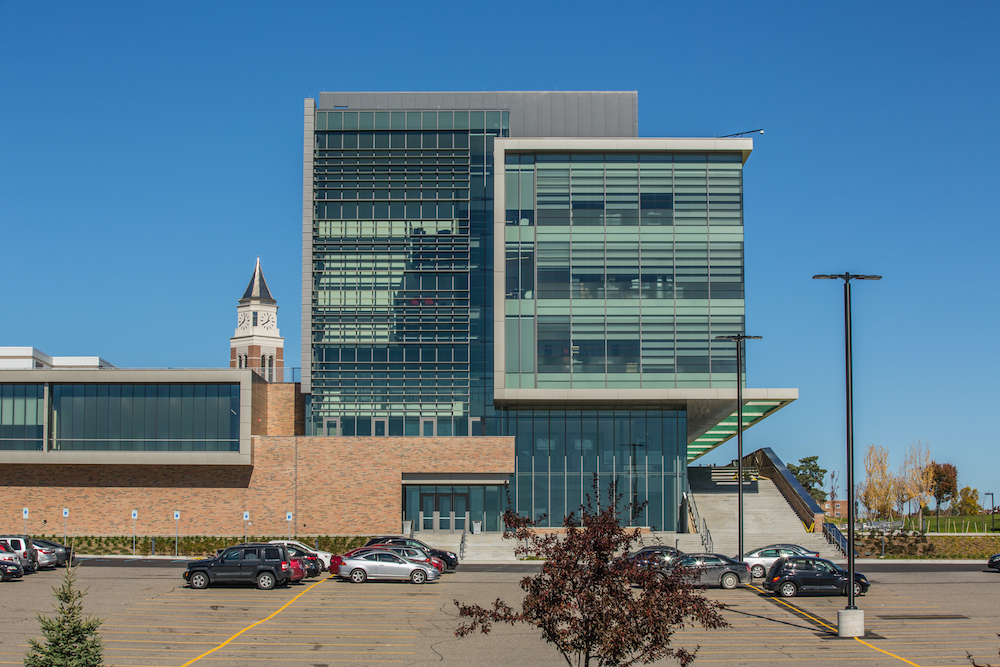 Phase one of the project, building the Oakland University Engineering Center, took 20 months and was completed in time for the fall semester of 2014. Phase two involves renovating 14,000 square feet inside other buildings on campus, updating classrooms and adding new restrooms.

In the past six years, Oakland University has constructed, renovated and expanded buildings to enhance student services and cater to the needs of incoming learners. Along with the Engineering Center, Oakland Center, Hillcrest Hall, Oak View Hall and Human Health Building all saw improvements. As a result of their dedication, OU enrollment has climbed by 59% since 1998. With the right projects, the school aims to provide the resources students need to excel and become experts in their fields.

Many students who graduate, including those in engineering-related fields, remain in southeast Michigan, bolstering the community and working in pillar industries. As a result, this investment in the OUEC is an investment in the future of the state itself.