A Lot Of Tasks, Right?

NCMA describes itself as “The national trade association representing the producers and suppliers of concrete masonry products, including concrete block, manufactured stone veneer, segmental retaining walls and articulating concrete block.” For over 100 years, the association’s mission has been to advance, protect and promote the common interests of its members. NCMA states that “through leadership, promotion, education, research, government relations and partnering, NCMA ensures that members’ products are the building materials of choice.” This hard work and dedication has remained consistent in vision, and has allowed for advancement and change throughout the years.

With the support of numerous contributors, NCMA is finally celebrating 100 years of change, development, and success. During this time of celebration, we are encouraged to remember all the milestones that NCMA has accomplished, beginning with the introduction of concrete masonry itself. 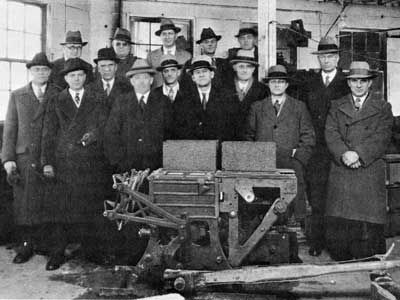 In roughly the first 15 years of the 20thcentury, a man named Harmon Palmer began the evolution of concrete block manufacturing. An excerpt from “The Evolution of Concrete Masonry Machinery” published as a chapter of FROM THE CARRIAGE AGE TO THE SPACE AGE: The Birth and Growth of the Concrete Masonry Industryby Eugene F. Olsen claims that “before Harmon Palmer, the few preformed concrete masonry buildings in existence were constructed of building units formed by hand or in such wooden forms as soap boxes, similar to the manufacture of the sun dried mud units known as “adobe.” Then came Palmer and his machine, and with it the beginnings of the hand tamp era of concrete block manufacture.”

This method provided a more advanced product for its time. Olsen mentions, “The machines described under dozens of different trade names in the construction publications of that day were predominantly of the “down face” type in which the mold was turned on its side to facilitate facing. The down face technique permitted the use of a richer, drier mix for the face of the block, and such faces were usually formed in rock, panel, bush hammered or similar designs. The cores were of various shapes and number—not unlike present day block. However, the face shells and cross webs were much thicker, and blocks were heavier.”

Other types of machinery were also being produced during this time, which typically fell into one of three categories: upright, wet process, and two-piece. While the upright machine was meant for making hollow block by tamping under the dry process, the machines operated in the wet process used a variety of molds to make block. These were either made out of sand, wood, or a system of sheet-iron molds. Two-piece block machines were used to create blocks that provided a continuous horizontal air space, offering a more thorough option for insulation, and were made by a mechanical press with a medium wet mixture utilizing a coarse aggregate.  Most of the early hand tamp machines were capable of making blocks with a range heights and widths. The initial popular lengths of 32 and 24 inches eventually dropped down to 20.

Not too long after these technological advances, “the Besser mixer,” invented by Jesse Besser, was produced with the objective of being able to start and stop the otherwise continuous mixing as desired. It had the ability to be operated at any percentage of capacity up to the maximum. This propelled the era of universal power tamping that was to come.

For the next 10 years, 1914 to 1924 to be exact, power tamper machines were nothing but a hit. In his book Olsen provides insight saying, “the early power tampers—although mechanically rather crude—were a vast improvement over hand tamping. They sharply reduced the cost of concrete block while improving the strength, uniformity and general quality of the product. In most power tampers, bars or rods were lifted by either chains, cranks or cams and dropped by gravity. They were activated and stopped manually, and uniformity depended on the machine operator. About half of the tampers lifted all the bars or rods at once; the others lifted alternately. Some power tampers were also suspended over the block machines, while others stood on the floor, straddling the machine.” It was during this time that concrete building tile was developed and even became quite popular.

Industry boomed when producing any size or type of unit became possible. “In 1924, as a direct result of the engineering development work of Jesse Besser, the company brought out one of its most important contributions to the block industry—the first successful stripper machine using plain pallets. The Senior Automatic Plain Pallet Stripper, as it was called, marked a revolutionary advancement in the art of producing concrete masonry units,” Olsen claims. Following the stripper machine, the Goodlett Vibrator was the first machine to introduce employing the vibration principle in the U.S. This innovation produced vibration by the reciprocal movement of the upper frame over a fixed lower frame. This method of molding was really decades ahead of its time, but offered a manufacturing solution that no masonry businessman could pass up.

1924 to 1938 marked the age of the automatic tamp. “This was a transition time in the machinery field, when gains were being consolidated and the bugs were being worked out of ideas already gestating. It was primarily a time of improvements and refinements in the power tamp machines in general use since the end of World War I. Slowly, in small increments of skill and power, machines were better and more heavily built, with a steadily higher degree of automatic operation,” according to Olsen. Machines in this period had the capacity to produce up to 3,000 or more eight inch equivalent blocks per eight-hour day, yet were always “bounded by the economic restrictions and the devastating disenchantment of the depression years.” Another big boom didn’t happen until the next Great War.

As promised, the concept of vibration to settle concrete in molds finally came back around with the help of Stephan Flam and Louis Gelbman in the years following 1938. Gelbman was granted a patent for his brick-making machine (which was very similar to that of Flam’s work), and worked with Stearns Manufacturing Company of Adrian, Michigan to further improve the machine which they called “Joltcrete.”

It is said that their first small model was shown at an exhibit of the National Concrete Masonry Association on 1936 in Detroit. Olsen describes, “the Stearns Joltcrete vibrator applied the principle of limited amplitude vibration under pressure—the mold box being stopped in both up and down positions so the limited travel subjected the material to 7,200 packing blows per minute. There was a 15 second vibration cycle, and the mold box traveled three sixty-fourths of an inch in a vertical plane. Three standard 8 x 8 x 16″ concrete blocks were produced at one time on the large Joltcrete, and its rated capacity was nine to eleven blocks per minute. Other sizes could be manufactured by making the proper adjustments. In addition to the inventor, the persistence and skill of Arthur B. Mays of the Steams Co. was primarily responsible for the success of this revolutionary development.” Other vibrating block machines were created soon later, such as the Besser “Vibrapac,” the Multiplex “Multi-Vibrator press,” and the Kent-Root “Vibra-Press.”

It’s so important for an organization to network with other professionals of their industry. How would the pioneers have accomplished all the aforementioned feats without being able to build off of each other?

The National Concrete Masonry Association (NCMA) encourages collaboration and has indeed collaborated with other organizations in its lifetime, including the Mason Contractors Association of America. Between events such as attending product shows and coordinating presentations or courses, associations begin to develop strong ties with each other and are enabled to network mutually. Something like being included on each other’s yearly event list means more than just being able to have another company outing. It means connecting with others who do what you do, or meeting people who do something completely different and then learning more about it.

In fact, even “outsiders” benefit from these experiences when events are offered to the public. For example, the NCMA and MCAA co-sponsored a design-build micro-conference back in 2005, hosted a Legislative Conference in 2008, as well as partnered in a research project in 2010. This list goes on to include collaboration in a variety of ways. This exposure and willingness to work with each other is something truly worthy of recognition during this year of celebration for the NCMA.

Leave it to the Leaders

“We envision NCMA being recognized as the industry expert and primary information source for concrete masonry and related products by NCMA members. Through networking, marketing and education, NCMA will demonstrate the intrinsic value that member-produced products provide the building process.”

In any field of work, cooperation is how things happen. But when you have skilled, honest, and diligent leaders willing to cooperate alongside everybody else, success rates increase exponentially. There have been countless leaders since the NCMA’s conception in 1918 committed to this vision statement, and each one has helped the association get to where it is today.

The 2018 Board of Directors includes Chairman Kent Waide, Vice-Chairman Darryl Winegar, Past Chairman Steve Berry, Secretary/Treasurer Rich O’Connor, and President Bob Thomas. Congratulations to this team, to all the predecessor board representatives, and for all your partnering organizations for making this year such an accomplishment to celebrate! While the worlds of business and industry sure can be tough ones, the National Concrete Masonry Association seems to be making all the right moves.

Cheers to the last 100 years, and may the next journey for the NCMA be just as evolutionary as this one.