Honoring The Legacy: The Masonry Hall Of Fame’s 2017 Inductees

Masonry is not only responsible for building long-lasting and beautiful structures; it’s the reason for so many legacies. On January 19 during the MCAA Convention at the World of Concrete, the Mason Contactors Association of America honored five of the industry’s finest. During the closing dinner held at Fogo de Chão in Las Vegas, Robert “Ducky” Baum, Richard Lauber, Rennie Tejeda, and Milton H. “Milt” Young, II all celebrated the award with their respective families and other esteemed guests. The late George Miller, the MCAA’s first Executive Director in 1950, was also honored. 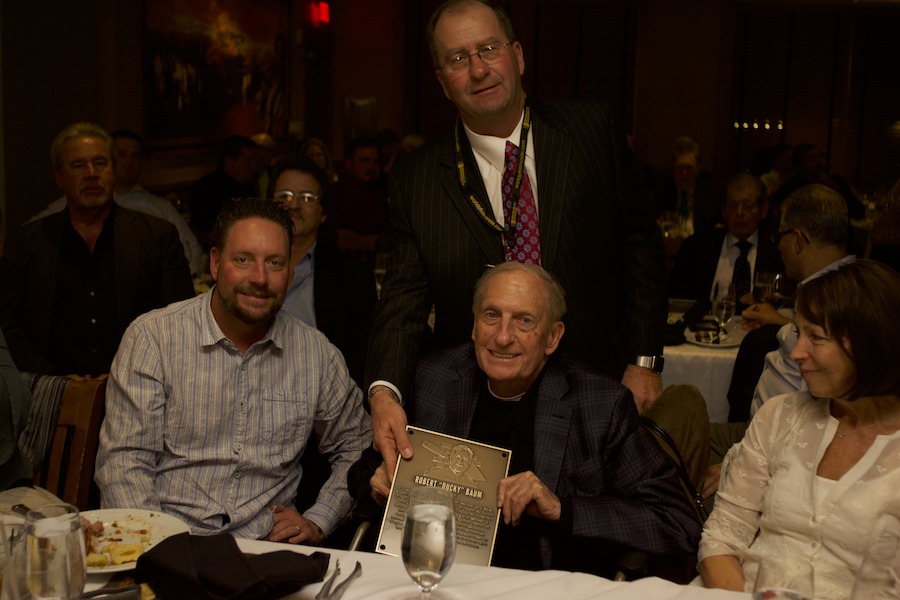 For more than sixty years, the 4th son of German immigrant Otto Baum, Robert has been a guiding force behind the growth and success of two of this countries leading masonry contracting businesses, Otto Baum Company of Ill. and Sun Valley Masonry of Ariz.

For the thousands of masonry industry careers his efforts make possible, his daily example of innovation, dedication, perseverance, loyalty, honesty, and faith are the inspiring factor.

Robert and his family’s continued committed investment in the empowerment of employees to succeed helps ensure masonry industry opportunities in the future. 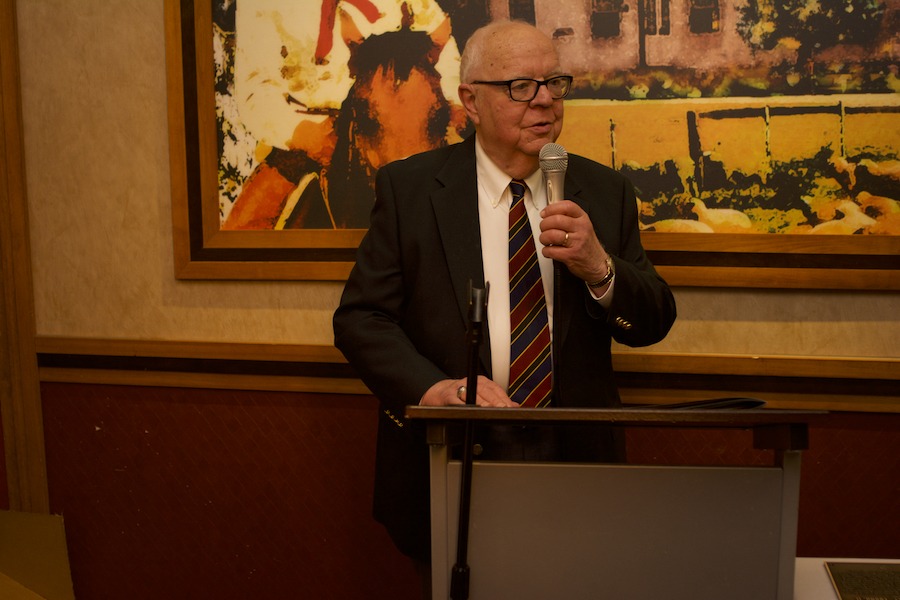 “Well, it’s kind of a surprise but a very great honor and I really appreciate it.”

Dick Lauber’s life-long involvement in the masonry industry has impacted the advancements within the profession to this day. He fought for worker safety, voiced field concerns, and improved labor relations through his dedication to doing the right thing. Not just a businessman, Dick has a true empathy for mason workers and their working environment.

He was a champion for the workforce, and his dedication to improving labor relations came with a vision that all could benefit from fair labor practices. It takes vision and courage to build harmony in difficult situations, and Dick was able to set an example as he worked to standardize industry practices and improve education opportunities.

“I guess part of my legacy would be that I tried to work with people, my word was my bond with you. I understand the union; we hired a lot of bricklayers. My goal was that they had the best healthcare, welfare, the best pension. That’s the same thing the union wants. So if I have any legacy that would probably be it.”

J & E Duff, Inc., the mason contracting firm Dick Lauber has been at the helm of for over 45 years, has been a leader in bricklayer hours worked, masonry laborers hours worked, gross sales and respect – a benchmark of success for all contractors. Dick never hesitated to speak, advise and help younger union mason contractors, and lived by the rule that an educated competitor is the best competitor. His leadership at J & E Duff, and on all the masonry related boards pushed for more education for contractors and bricklayers alike. Professionalism is a trademark of this man and everything he touches 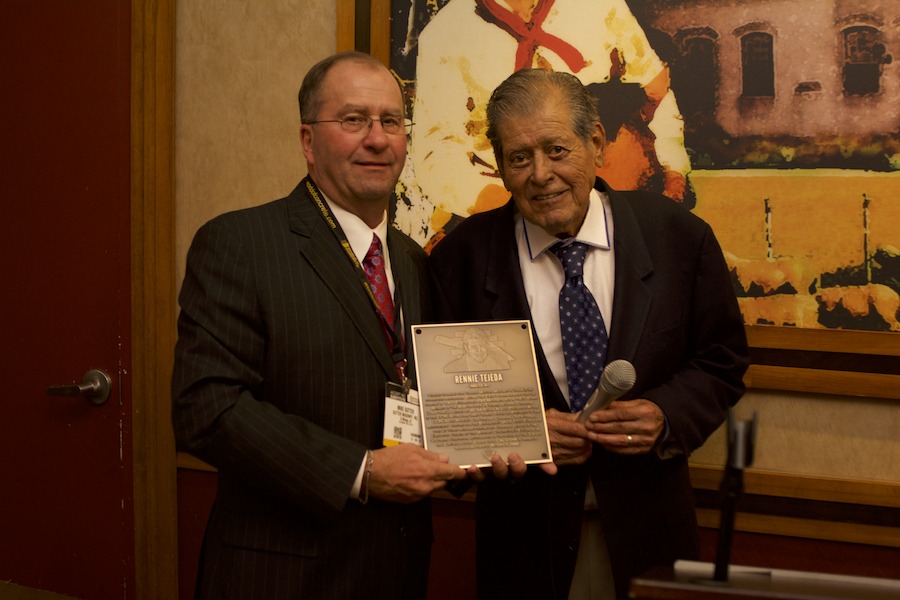 “It’s one of the best honors I’ve ever had in my life to be inducted into the Masonry Hall of Fame.”

Rennie Tejeda has dedicated his life to the masonry industry and was actively involved for over thirty-five years. His passion for masonry and vision for the industry are what set him apart. He was a great leader in the industry, who was well-respected by both his fellow masonry contractors and the general contractors he worked and interacted with on projects. More importantly, he was a mentor to many of the younger masonry contractors who looked up to him and sought advice from him due to his experience and integrity.

“I told all my people ‘just build it one time, that’s all we have to do and do a good job.’ I built some very big brick jobs in LA. I did the Anderson School at UCLA. One of the best jobs I ever did was the church in Pasadena when we were first in business. It had a lot of detail to it. I used to go home at night and take the plans, so I’d study the plans so I’d know what I was doing. It’s one of the greatest things I’ve ever done, besides having four kids.”

He has spent countless hours serving and supporting the masonry industry. He was actively involved in various masonry trade associations. He was a board member of the local Masonry Institute of America (MIA) for over 25 years and served as Chairman of the MIA from 1988-1993. Rennie also served as the Region H Vice President of the MCAA for many years, overseeing the California and Hawaii territories. Rennie was active in the California Conference of Masonry Contractors Association (CCMCA), for over thirty years. In 1978, he was elected President of the Los Angeles Chapter, and served as Chairman from 1979-1980.

He had many significant accomplishments and contributions to the masonry industry. He developed and created the Prefabricated Masonry Systems (Brick Panels) in Southern California working closely with Jeff Asher, now Principal & Chairman of KPFF Consulting Engineers, and with the Higgins Brick Company. Rennie also was instrumental in the design of specialty block – the Y block and Chevron block – working with Truestone Block Company on units used in the construction of CMU cell walls for a Correctional Facility at the Ventura County Jail. These specialty block ultimately became the standard for Correctional Facilities in the Southern California area.

Knowing the importance of safety in the industry, he worked jointly with CAL OSHA Consultation Division in California promoting safety on scaffolding and the bracing requirements of the Masonry scaffold frames.

R&R Masonry just celebrated its 53rd Anniversary last August. The company’s success is directly attributed to Rennie’s devotion and passion for the industry, and it is because of his strong work ethic, honesty and fairness that R&R Masonry is still flourishing today. The masonry industry is stronger because of his dedication and lifetime contributions.

To the next generation he says, “Well you have to decide what you want to do. Don’t take giant steps, you take little steps when you decide you want to do this. Do what you need to do for yourself and your family.” 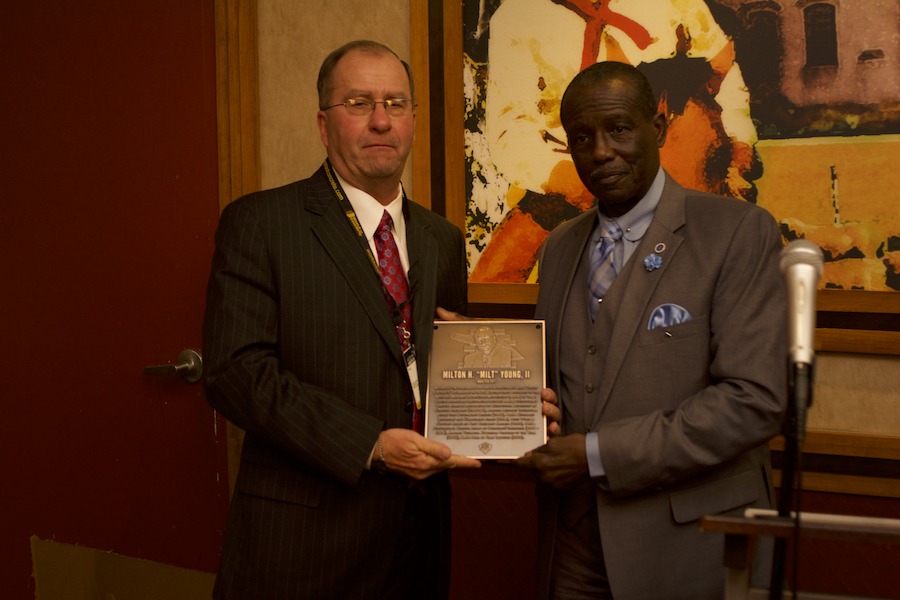 “Really, this is a tremendous feeling. Words are hard to describe the emotions that you’re experiencing. Only one word, ‘awesome.’ Blessings come when you dedicate yourself to doing things everyday that are beneficial to others. It was never my intention to do anything for the recognition, but since it turned out that way it’s almost icing on the cake.”

In August 1975, Milt accepted the position of masonry instructor at Hale County Center of Technology, located in Greensboro, Alabama. While performing duties as the masonry instructor, Milt also complied with requirements and recommendations of Alabama State Department of Education by 1979 – 1980.

The American Vocational Association (AVA), held its educational meeting in Cincinnati, Ohio in the fall of 1989. There was a discussion about organizing and establishing a National Brick Masonry Instructor’s Association. At this meeting, Milt was selected chairman of the committee to draft an open letter to brick masonry instructors across the country. Mr. Bill W. Weaver, the Industry Advisor from Brick Institute of America (BIA) located in Reston, Va, explained some of the concerns facing the masonry industry and encouraged the committee to move forward as quickly as possible.

The response to the open letter was overwhelming! Over one hundred fifty plus instructors all over the USA requested additional information and expressed support for this association NBMIA.

The first National Masonry Instructors Conference and Seminar was held in Myrtle Beach, S.C. during the summer of 1990. Milt was elected the first president of the association along with other officers.

South Carolina already had a State Masonry Instructors Organization along with other states. However, South Carolina pledged their support and assistance in every way. Mr. A.C. Lewis, president for the South Carolina organization and the new NBMIA president, developed a relationship and partnership with Milt that have continued until today. The secretary of the South Carolina organization was encouraged to help with written communications, correspondences and printing of information. Soon after the 1990 conference, duties and responsibilities were divided among the elected officers (secretary, treasurer, etc.). This association would serve to represent all masonry instructors from every state as well as those at correction institutions.

Milt has worked with the Alabama Instructors Association and the Alabama Department of Trade and Industrial Education to unite and promote workshops designd to support and strengthen the skills of technology instructors.

“Hopefully, [my legacy] will be something where they say ‘well here was a young fellow who was determined to see others do well, even though he didn’t actually become a famous contractor himself.” 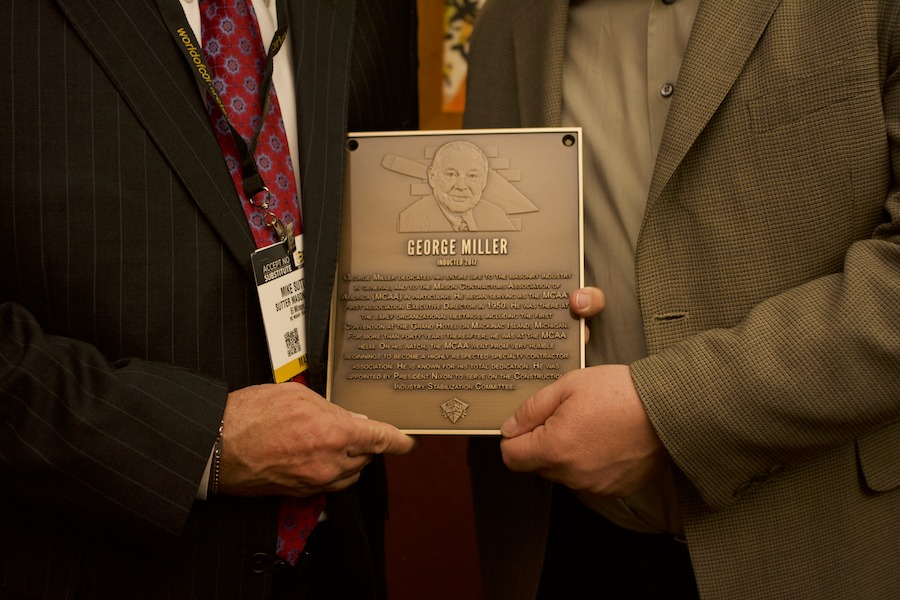 George Miller dedicated his entire life to the masonry industry in general, and to the Mason Contractors Association of America in particular.

He began serving as the MCAA’s first association executive in 1950. He was at the early organizational meetings, including that first Convention at the Grand Hotel on Mackinac Island, Michigan. For more than forty years thereafter, he was at the MCAA helm.

On his watch, the MCAA went from very humble beginnings to become a highly respected specialty contractor association. Those active in the MCAA during those years can and will testify to his total dedication, and what he was able to accomplish with minimal staff (usually just a secretary).

One benchmark for how highly respected George Miller and the MCAA became was when he was appointed by President Nixon to serve on the Construction Industry Stabilization Committee. That appointment was a major feather in his, and MCAA’s, cap. We owe George Miller much.

About The Hall of Fame

All inductees are nominated by their peers and carefully reviewed by a panel of judges. Nominees must receive two-thirds of the eligible votes in order to be accepted into the Hall of Fame.

How PROSOCO Makes Its Products...
Behind the Scenes at PROSOCO...
2021 GEN NXT Year In...
The Fechino Files: Sealant Basics
8 Quick Tips for Workboots
Saved From The Brink Of...
Five Ways That Busy Contractors...
Contractor Tip Of The Month:...
On The Level: Keson and...
Cleaning and Caring For Clay...
Honoring Their Legacies — The...
Building More: Father Vs. Child,...
The Fechino Files: Mortar Net...
The 2021 Midyear Meeting: Memphis,...
Proper Work Boot Maintenance
Develop a Marketing Strategy For...
University Project Shows Rainscreen Success...
Management Techniques: The Good, the...
Success in 2021: An Update...
On The Level: Keson and...
Contractor Tip Of The Month:...
The 2021 MCAA Midyear Meeting...
Practicing Fall Safety In Masonry
Exploring BELGARD DESIGN STUDIO
The Fechino Files: A Proactive...
Building More: Your Best Advice?
SIX STEPS Widowed or Divorced...
Masonry Today: Perfecting a Classic-Craft...
Business Building: Customer Focus =...
Delay of Project