March 2012: World of Concrete/World of Masonry

World of Concrete/World of Masonry

Increased Attendance and a Silver Lining 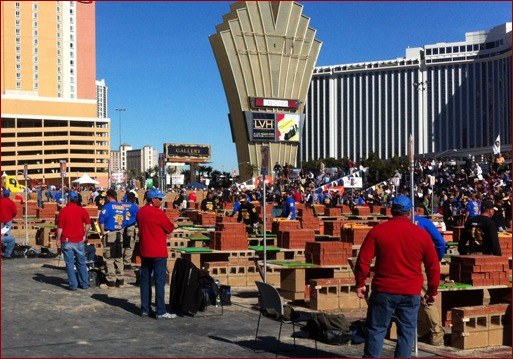 The SPEC MIX BRICKLAYER 500 is about to commence.

After several years of doom and gloom, vendors and attendees at this year’s World of Concrete/World of Masonry show in Las Vegas put up increased attendance numbers – 52,088 – and had smiles on their faces. The overall tone relayed that, perhaps, the dark clouds of a crumbled economy are lifting, and things are slowly beginning to turn around for commercial construction.

The 10th annual SPEC MIX BRICKLAYER 500 national bricklaying championship winner was Leif Reints of Reints Masonry Works in Neosho, Mo., won first place after laying 583 bricks in one hour. He took home a FORD F-250 4×4 truck, $5,000 and sponsor prizes worth thousands of dollars. The TOP CRAFTSMAN award was given to mason Scott Tuttle of Quik Trowell Masonry, Clearfield, Utah. Tuttle laid 474 bricks and won $5,000 in cash, a Multiquip EM120S mixer, a STIHL TS 420 A-EWC Cutquik cut-off machine and thousands in sponsor prizes. His tender was Brian Tuttle. Look for extended coverage of the SPEC MIX BRICKLAYER 500 in the April 2012 issue of Masonry.