Stone Carving is alive and well at the Washington National Cathedral, where since 1907, architectural and sculptural carving has taken place using methods and tools passed down through the generations. The first stone was laid on September 29th, 1907 and the final stone was set on September 29th, 1990 and in those 83 years, an amazing collection of carvings exist, with restoration and new work continuing to this day. The Cathedral is built of Select Buff Indiana Limestone and although there are a few other types of stone in the building, the vast majority of the carvings and cut stone is Indiana Limestone. The wonderful qualities of Indiana Limestone make it the ideal material for anything from fine statuary to the structural elements such as the flying buttresses and arches that hold the structure together.

The great limestone mills in Indiana fabricated most of the architectural stone on the Cathedral based on the architect’s drawings, templates and patterns. Generations of talented stone cutters and carvers in Indiana cut and carved some incredibly complex architectural pieces for the Cathedral structure. The stones for statuary, finials, rosettes, reliefs and other carved elements arrived at the Cathedral in block or roughed out form. These works of art were executed in clay by sculptors then cast into plaster models to be reproduced in stone by the carvers. The carvers were also given some freedom to add their distinctive touch to certain carvings on the Cathedral such as gargoyles, grotesques and other whimsical creatures.

For the carving of statuary, busts, reliefs and other complicated pieces where a sculptor’s work is to be reproduced in stone, a pointing machine is used. A pointing machine is a measuring tool that transfers points from the sculptor’s plaster model to the stone being carved by a pointing needle mounted on an articulating arm that can cover the entire model and be transferred to the exact spot on the stone. It sets the depth of the finished surface and tells the carver how much stone needs to be removed and acts as a three dimensional mapping tool to control the finished carving. A very important part of this process that cannot be transferred by this device is the final finishing of the piece by the stone carver and here is where the skill and art of the carver comes in to accurately convey the sculptors work. There are larger than life statues of Christ, St. Peter and Paul, Adam, Moses and many others throughout the Cathedral that were sculpted in clay and then executed in stone by the Cathedral’s carvers. Recent carvings include Mother Teresa, Rosa Parks and Johnathan Daniels, an Episcopal seminarian killed during the Civil rights era. One of the most well-known and popular carvings on the Cathedral is of Darth Vader located high up on the northwest tower.

Stone carving tools such as points, gouges, splitters, rippers, tooth and flat chisels have not changed much over the centuries. Carvers are always modifying, grinding, shaping and changing the contours of their chisels to fit a specific need to shape a stone in a certain manner. Here at the Cathedral we have chisels that have been passed down through generations of carvers, wonderful hard steel that has a temper and feel that’s hard to describe. Hand hammers and mallets are used but pneumatic hammers are the predominate carving tool to move the chisels. It’s amusing when people see these being used and think it is “modern technology” when as stone folks know, they have been around since the end of the 19th century. Some years ago, a woman came to our shop with two boxes of chisels and pneumatic hammers that belonged to her uncle who was a carver at the Cathedral in the 1930’s. We soaked the seized up hammers in penetrating oil and cleaned up the chisels and they are wonderful tools that get used every day. 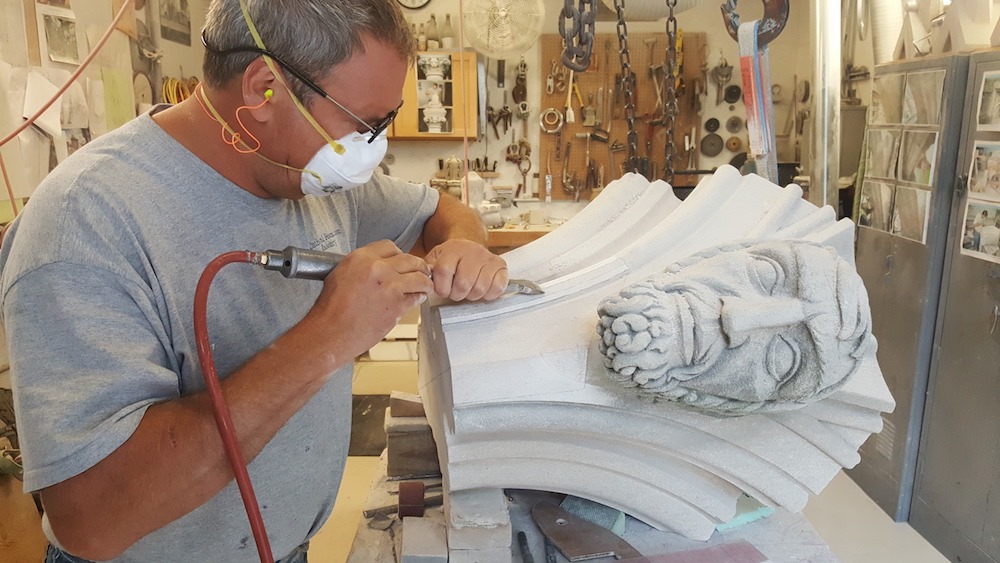 For about the first half of the Cathedral’s construction, well into the 1950’s, the majority of the carving was done in place once a particular section of the building was completed. The blocked out or roughed out piece of stone that made up that part of the architecture was then ready to be carved. It could have been a gargoyle, grotesque, boss and keystones high up in the ceiling, reliefs or even an inscription. The carver would then get on the scaffold once the stone masons finished the setting and would carve the piece in place using a model, drawings or patterns. In 1955, carver Joseph Ratti fell to his death from a scaffold as he was getting ready to carve two grotesques at the base of a gablet about 50 feet up on the north side. It was the only construction related fatality in the Cathedral’s 83 year construction history. The two stone blocks were left uncarved in his memory and can be easily seen from the ground. There is also a carving of Mr. Ratti in the Cathedral carving a gargoyle as another memorial. As the pace of construction picked up in the 1960’s more carvers were hired and stones were pre carved in an onsite carving shop. Typically the pieces being carved would be several months or even a year out based on the fact that the stone setting goes faster than the carving. There would be also be some final finishing work carried out on the scaffold.

The 1960’s and 70’s were a period that saw great progress made in the construction of the Cathedral. The Central Tower and Nave were completed and the West Facade was also started. More than half of the Cathedral was completed in those twenty years, more than in the previous fifty. A tremendous amount of carving was completed with many large monumental carvings created such as the Christ in Majesty Statue above the High Altar and the large Tympanums above the South

Transept and West Entrance. All this work was done under the Cathedral’s master carvers with names like Italo Fanfani, Roger Morigi, Paulo Palumbo, Vincent Palumbo and John Guarente. The carvers were predominantly first generation Italian although there were also other nationalities. One of the great sculptor/carvers was Constantine Seferlis from Greece, a talented Yugoslavian carver named Frank Zic and an Englishman named Patrick Plunkett. The 1970’s also brought some American born carvers, Walter Arnold and Malcolm Harlow.

The Cathedral was maintaining a fast pace of construction in order to complete the Nave and the magnificent West Rose Window for the Bicentennial in 1976 and succeeded in doing so but that led to financial difficulties and by 1977 as the twin West Towers were just beginning to emerge, construction was halted due to lack of funds. Most of the construction crew was laid off and only one carver, Vincent Palumbo remained.

In the early 1980’s the Cathedral began coming out of debt and with renewed fundraising and careful planning the construction crew was brought back and In addition to Vincent Palumbo, carvers Patrick Plunkett and Bill Bucher returned and a carving apprenticeship program was started. Young people, some with art and sculpture backgrounds and some without began working under the tutelage of Master Carver Vincent Palumbo. By 1985 about a dozen carvers were working in the Cathedral’s shop carving pieces for the West Towers, the final phase of construction that would complete the building. By the late 1980’s, a new generation of carvers were trained. Gargoyles, grotesques in the shapes of various animal heads and angels were sculpted and carved. Also, hundreds of finials, crockets and other architectural elements that adorned the pinnacles were produced so that on September 29th, 1990 in the presence of President George H.W. Bush the final stone was laid high on top of the South Tower, a half ton carved finial that capped off a pinnacle. It was exactly 83 years to the day that President Theodore Roosevelt laid the first stone on the site.

The 1990’s saw quite a bit of restoration work take place on the structure. Roofs were replaced, stonework was repaired, repointed and cleaned, stained glass windows were restored and new ones were designed and fabricated. All of the normal things that a large monumental masonry structure requires to keep it maintained. In the mid 2000’s, Andy Uhl and Sean Callahan, two stone carvers who were part of the group of apprentices hired by Vincent Palumbo in the 1980’s for the final carvings on the West Towers came back to the Cathedral. Andy and Sean spent time on the exterior restoration of the White House and other monuments in Washington DC and came back for restoration work and some new carving projects that remained inside the Cathedral. They worked on tablets, lettering, surrounds and the busts of Mother Teresa, Rosa Parks and Johnathan Daniels. Carving was back at the Cathedral and these skilled and talented carvers who learned this craft in the classical manner from the master carvers of the previous generation were back on the building where they first laid a chisel to stone. 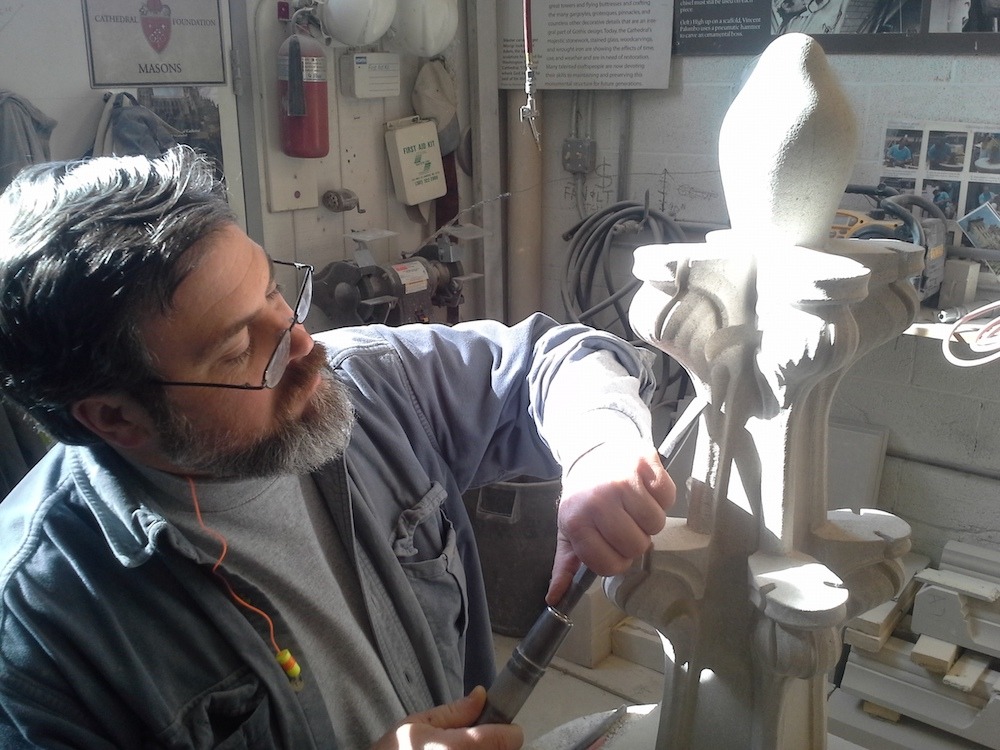 Having stone carvers with a broad knowledge of Gothic architectural elements and stone carving and cutting techniques has been a tremendous asset as earthquake repairs are carried out on the Cathedral. Andy and Sean spent years perfecting their craft and are now re carving many of the elements they once carved as new. Our approach when assessing an earthquake damaged element is to try and salvage the piece if possible by doing a Dutchman repair if the piece will remain structurally sound. If the piece cannot be salvaged then a new replacement will be fabricated and carved using the original damaged piece for patterns or as a model. We have retrieved many broken pieces that fell during the earthquake from the roofs and parapets and epoxied them back together to use as patterns and templates.

Limestone fabricators in Indiana are once again supplying Select Buff for the Cathedral and new technology is also being employed. Damaged pieces can now be scanned and CNC and robotic cutting and carving is helping to re-create some destroyed elements such as finials and other complex carvings. The roughing out and initial shaping process can be accomplished with these robots, leaving only the final carving and the “human touch” that the wonderful carvings of the Cathedral show. This cutting and carving technology is advancing rapidly and it is changing the way stone carving is done. Where will this leave the craft of stone carving in ten years? How will apprentices be trained when a CNC machine and robot can shape a block of stone faster than a person can? Learning how to properly hold the tools, the feel of a chisel cutting into a stone and the way a stone behaves as one cuts and carves starts off with an apprentice being given a block of stone. You learn by cutting simple shapes and lines and after months, if you finally reach the moment when you “get it” then that is when the journey begins. It never really ends. We always are learning and trying to get better. We joke here at the Cathedral that at least you can’t put a carving robot or CNC equipment on a scaffold… yet.

It is humbling for those of us who work on this building, surrounded by the work of generations of craftsmen who came before us. Their excellent work inspires us and we are now entrusted to repair and maintain this Cathedral to the best of our abilities so it can be passed on to future generations.