Can It Help Reinvent Masonry?

Masonry work can be repetitive, time-consuming, and physically demanding. Finding ways to increase productivity with less physical fatigue has long been a goal for the industry. In recent years, advancements in automated and robotic construction technologies have brought about improvements that allow masons to place more and heavier masonry units in less time and with fewer people.

Construction Robotics, based in Victor, NY, has created two solutions [um1] [um2] – one of which is the MULE. It stands for Material Unit Lift Enhancer and, described as a “cobotics” innovation, is more like a strong assistant that allows a mason to place CMUs more efficiently than possible without the help. The MULE ML150 is designed to place material weighing up to 150 pounds.

Echelon is Oldcastle Architectural’s masonry products and services brand. Masons used MULE to lay Echelon’s 8x8x32-inch CMUs in the construction of a new barracks at the Great Lakes Naval Station in Illinois. The oversized blocks allowed the job to proceed much faster. This particular job had a large foundation, approximately 166,000 square feet, and the oversized block sped up that installation. While fewer units were needed[um3] [um4], the larger blocks would have required much more physical strength to maneuver. Without the MULE, it takes two men to lift today’s large 32-inch blocks[um5] [um6]. 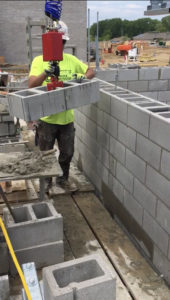 “Anytime you’re talking about increased production, you’re talking about cost savings,” says Michael Vaughn, brand manager of Echelon and Belgard Commercial. “When you’re able to use fewer pieces on the job due to the larger size, you decrease labor. When you look at people’s wellbeing and health, they aren’t getting as fatigued or strained, because they do not have to do as much labor with the assistance of the MULE.”

Tom Hale is the masonry product manager of County Materials in the Wausau-Stevens Point area of Wisconsin. He first heard of the MULE about four years ago, and started fielding some fact-finding requests shortly after. Hale sat down with representatives of Findorff in Madison, Wisconsin, to discuss the value of 32-inch blocks. Hale received a commitment from Findorff that they would use 12x8x32-inch blocks on two projects.

“They ended up using it on five jobs, and they liked it,” Hale said. “They thought it was an efficiency booster. They thought their production went up about 60%, which was phenomenal, even given the short learning curve to use it. They did some elevator shafts, stairwells, and gymnasium walls. Everybody that’s used it in gymnasiums loves it because it helps efficiency on those big tall walls.”

Given that positive feedback, County Materials now manufactures Oversized 32 inch CMUs in 8x8x32 and 12x8x32 sizes. “Our company can produce the units

in medium-weight, lightweight and normal-weight blocks,” Hale says. “This CMU helps with fire ratings and energy values. I don’t think the technology is in its final form yet, but I think that oversize CMUs are going to be the future of masonry construction.”

The compressive strength of the 32-inch block is higher than normal block, and it meets all ASTM C90 requirements and then some—the standard units meet a 2-hour rated firewall, and thoroughly grounded walls meet a 4-hour fire rating to last the life of the building. “Because of the higher compressive strength, engineers can now reduce the amount of steel reinforcement they’re using in the wall,” says Hale, which is a benefit given the drastic spikes in steel prices over the past year. He also notes that structures should become more sound with these blocks, because instead of having a mortar joint every 16 inches, which is the weakest part of the wall, there will now be one every 32 inches. “So you’ve got fewer mortar joints, which is going to help with water and moisture penetration, which is another plus that we never even thought of when we started this process.”[um8] [um9]

The block itself also looks different. When it’s ground or polished, it provides more of a granite or terrazzo look that’s different from traditional masonry and that can also take different colors and finishes.[um10] [um11] “That gives it more potential applications,” Vaughn says of the Echelon product. “It lends itself to more architecturally designed spaces, so you’re able to use it in different applications which opens up a lot more opportunities for masons.” [12]

Making jobsites safer and more efficient to address an aging workforce and an industry-wide labor shortage are two of the main ways that robotic-assisted construction promises to help. There has been skepticism from the career masons and field people whose workplaces look different due to this type of construction.

Using MULE reduces the needed crew size, so it could be easy to connect the dots between assisted construction and less jobs for masons. However, there’s another view. Yes, customers see reduced crew size as costing less. But that can also mean that they have more money for other jobs, and the increased speed of completion could mean that masons actually end up getting more work. The quality of wall alignment also improves with using this type of lift assist equipment. This technology could also be something to draw younger generations into the masonry trade.

Impact On The Industry

Some experts say that adapting the current models of how work is done just might be what is needed to reinvigorate the industry. Hale sees the impact of these new technologies as an overall positive.

“It’s going to expand masonry because it will not be viewed as extremely hard on the body because the machine is doing all the heavy lifting,” Hale says. “So I think it’s going to keep the good masons in business longer. And it’s also going to attract the younger kids because it’s not hard work.” Hale says the advancements still let masons be craftsmen, but without the strenuous labor.

Hale recently learned about a school in northern Wisconsin that offers a masonry trades course and just bought a MULE. They are also receiving 12x8x32 and 8x8x32 Oversized 32-inch CMUs from County Materials. “They can teach the kids coming out of high school how to install a block using the MULE, which I think will be a game-changer,” he says.

“This technology has the potential to bring more people into the industry. It may contribute to reducing workmen’s comp claims. It also can help extend the career of a mason, because instead of retiring at 50 or earlier due to hard work, they could potentially work until age 60 or 65 if they wanted because it’s easier on their bodies. There couldn’t be a better time for masonry trades using a 32-inch CMU.”

The 32-inch blocks are available in 17 states, with 22 states coming soon or with blocks available with extended shipping times. Quikrete now has [um13] [um14] multiple plants, including Best Block, producing the 32-inch block. Justin Meyer, Vice President of Best Block, says collaborating with Construction Robotics was the result of a shared vision for innovation.

“It’s one method we use to meet the needs of the masons we serve,” Meyer says. “By combining our ability to adapt production to larger size blocks with Construction Robotics’ new lifting equipment, both companies quickly saw the opportunity to improve masonry construction. Working collaboratively, we’ve not only grown the masonry marketplace but also delivered real value to key regions across the country.”

The increase in productivity alone, which could be as high as 40-50% depending on the job the “cobots” are used on, could help reinvent the industry given enough widespread adoption. “There are many positive factors when you’re talking about using this type of assistance on a job, so I think overall it’s a win-win,” Vaughn says. “It’s a win not just for the mason but for the overall project because it is installed much quicker.”

Hale says the majority of the projects that the blocks are being used for right now are school jobs, such as swimming pools and gymnasiums. He’s prepping for an airport terminal wall project coming up. He hopes this new model of efficiency could be applied to projects such as prisons, hotels, gas stations, schools, larger footprint stadiums, warehouses, and convention centers. Quikrete has already utilized the large blocks on warehouses, hotels, and municipal installations.

Skanska USA Building and Bratton Masonry collaborated on the 48,500-square-foot Patricia Reser Center for the Arts in Beaverton, Oregon, during COVID. Tim Johnson, Executive Vice President and General Manager for Skanska USA’s Oregon operations, said, “The MULE is easy to operate once [it’s been] calibrated and [people are] trained. The masons like that at the end of a shift, including 10- hour shifts, their bodies are not as fatigued. Finding this solution to solve a problem during COVID-19 allowed us to complete a suspended task with increased efficiency and improved safety.”

Skanska calculated a 2x production increase from 75 12- inch blocks per day per placed by a two-man team, to 89 12- inch blocks per day per individual mason. This project had both 8-inch and 12-inch normal weight concrete masonry units being used. Due to COVID-19 social distancing combined with two-man lift requirements, the project was at a standstill. They started with six MULEs on this project, but quickly added three more. 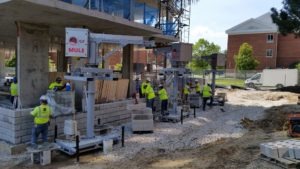 Jere Bucek, Vice President of Sales and Marketing for the R.I. Lampus Company, a[15] Western Pennsylvania-based concrete products producer, sees the impact on the industry as being very important, both in the short-term and long-term. Short-term, these advancements can help keep masonry in front of architects, especially given the drastic increase in lumber prices right now. “Efficient labor is a big issue,” he says. “Getting more blocks in the wall at one time is going to help as well as using something like the MULE too, to give those contractors something that they can keep going with instead of getting tired out. [16] The labor pool is shrinking in every industry, especially in the trades. We’re trying to change that narrative.”

One Technology Doesn’t Fit All

There are jobs where unassisted masonry installation is still the best option. Repeatedly moving and setting up the MULE can wash away any efficiency gains. Hale also says that going around corners reduces efficiencies. Bucek notes that on a jobsite with tight space constraints, using the MULE just might not make sense. “This will work best on big open spaces and not spaces with a lot of hills or one-way streets,” Bucek says.

The best application for these devices is a large job, such as a wall where three or four MULEs can be set up to help produce walls 25 feet long and 25 feet high. “That’s huge,” Hale says. “I think the next generation of the MULE will be coming out to solve that issue.”

A Shift In CMU Standards?

The humble CMU block hasn’t changed much over the past century. Meyer says Best Block’s goal is to redefine concrete masonry, “and that goal requires innovation.” As a partner of the trade, Meyer says Best Block looks for opportunities to develop new products to improve production. Structural masonry systems are already very competitive with steel, concrete, and now wood. Meyer says this new opportunity, combined with BIM and developments in the TMS Masonry Code, give the industry further opportunity to be aggressive in selling structural masonry systems.