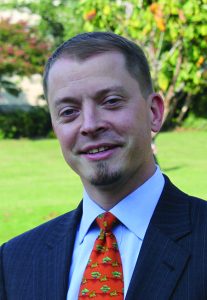 Growing up in the 1980s and 1990s I was one of the few boys in my schools and neighborhood who were not into comic books and superheroes.  I was too busy running around on soccer fields, having a blast traveling around with my father to political conventions, and hole-in-the wall antique stores looking for Presidential campaign collectibles. I would watch the occasional Batman show on television when I was home sick but never got into the stories or broader superhero world.

Fast forward to 2018. I am now married, Hollywood has decided they have a huge money-making idea, and I have a 12-year-old son. Not a week goes by he is not telling me some new story about the Avengers, begging me to take him to the theaters to see the new movie, or working on his school project that will interject the story of Julius Caesar into…you guessed it…the Avengers.

All of this newfound education into the world of superheroes got me to thinking just what is it that makes these stories so compelling? I have centered my answer on one idea. We love it when you can take a group of people with different backgrounds, different skill sets, and different “powers” that might make a couple of ripples in the world on their own, but when you assemble them into a unit, watch out! To this end, the Avengers were a crazy team of superheroes from all walks of life and with all sorts of powers, but when they heard the rallying cry “Avengers Assemble!” they came together and battled side by side.

You members of the Mason Contractors Association of America remind me a little bit of the Avengers. You come from all corners of the country. Some of you are great businessmen, some are the best masons and craftsmen in the field, some are amazing storytellers and speakers, and some have political aspirations. On your own, you may have an impact, but when we join together as one MCAA, we have seen the impact we can have fighting side by side. We have seen that in Washington, DC during our annual Legislative Conference and Fly-In. We have seen that in Las Vegas at the World of Concrete. We have seen that throughout the country during our annual Midyear meetings.

Many of you have heard the cry and have joined us in Washington, DC to talk with your Members of Congress. You have picked up the phone and called Congress when there is a legislative call to action. Many of you have formed relationships with your local elected officials. I have written about and presented webinars on the importance of all of these actions and I am amazed at your commitment to moving the masonry industry forward. But let me ask you, what if the Avengers left Thor’s hammer on the sideline when they went into battle?

I don’t want us to leave any “weapon” we have on the sidelines when we are coming to DC and that is why I wanted to take the time to describe to you the importance of MAC PAC, the political action committee for the Mason Contractors Association of America.

Federal Political Action Committees were first created in the early 1940s and are used to gather and distribute funds that are allowed to be used to support or defeat candidates running for political office. MAC PAC was first established in the 1990s and we have utilized it successfully to support candidates that understand the importance of the masonry industry and support our goals and policy positions in Congress.

Year after year we have been gaining the number of funds that you the MCAA members have been contributing to MAC PAC and many of you who have come to DC or the Legislative Conference has been able to witness firsthand how we distribute those funds. We can’t thank you enough for your support! But I also wanted to give you a couple points of reference for why we can’t rest on our laurels and must continue to take MAC PAC to new levels.

Historically speaking the U.S. Senate and the U.S. House of Representatives typically had large gaps between the majority and minority parties for long stretches of time. One party typically had great power in Washington, D.C. when they held the majority. In 1980, this trend seemed to change and we have seen narrowing majorities ever since, and in more recent times, more wave elections and power flip-flops quicker than we have typically seen. Over the past 18 years, we have seen massive percentages of turnover in Members of Congress, with some elections in recent years approaching 24% turnover in the House of Representatives. This causes massive disruption to our causes and efforts to educate Members of Congress and build relationships with new champions. However, this is just one part of the story.

$5 Billion! Congressional races are becoming more and more expensive and therefore our support is more and more critical to ensure our champions are being elected and re-elected. We have had record-breaking contributions to MAC PAC over the past 3 years and we just returned from Las Vegas where we had yet another great MAC PAC event, but we can’t afford to leave this weapon on the sidelines. We need you to heed the call of “Mason Contractors Assemble!” and join us in this fight.

If you would like to learn more about MAC PAC please contact MCAA immediately so we can get you the needed paperwork and put your contributions to use here in Washington, D.C.