Drones may be one of the world’s coolest new inventions. During the opening ceremony of the Winter Olympics in Pyeongchang, South Korea, earlier this year, thousands were used to produce a light show the likes of which the world had never seen. Sales are increasing so that in 2018, some 10 million could be sold across the globe, according to DroneDJ.com. While insurance, farming, construction, and other industries are finding drones add previously impossible access and numerous benefits, students are trying to expand the possibilities we see today.

The Federal Aviation Administration (FAA) has partnered with almost two dozen US, Canada, and UK schools on drone-based research programs. The Commercial Drone Alliance, Amazon, and other organizations helped get Section 336 revoked, which allowed hobbyists to fly their drones without a license. Drone operators across the masonry industry are scrambling to get or update their licensure now that the FAA has passed the Reauthorization Act of 2018. But before we discover what the federal government expects drone pilots to know and how to go about taking the test for licensure, let’s consider what masons say about safety and regulations.

Don Ritt, marketing director for Chicago-based Restore Masonry, has been operating drones commercially for two years. Currently, he’s using it to assist the demolition of a defunct chimney stack located very high above Hyde Park High School. Using a drone saves time, he says, because “The only other way to document that would have entailed putting me up in a crane or some sort of lift that boomed me up– and that would have been an insane cost.”

One safety tip he considers fundamental to flying drones is to never let the drone out of an operator’s site.

“It’s easy to fly it over a building and not see it anymore, but it’s not the best idea to lose sight of it, especially if there are trees around. If you lose sight of it you’re only seeing what’s within the camera’s field of vision,” he says. There is no vertical sight, no panoramic vision, no view of what’s behind the drone.

Keeping sight of the drone helps ensure Ritt’s second safety tip: always consider who’s going to be underneath the drone, even if the drones only weigh a pound or two and the workers are wearing hard hats.

“Try not to fly it directly over people. You orbit them in a circle, trying to get no closer than 30 feet,” he says. He also reminds users to do things by the book, to register the drone with the FAA, and get the proper licensing and documentation to fly. Not only are they legal requirements; they will teach operators and give them more confidence in their skills. 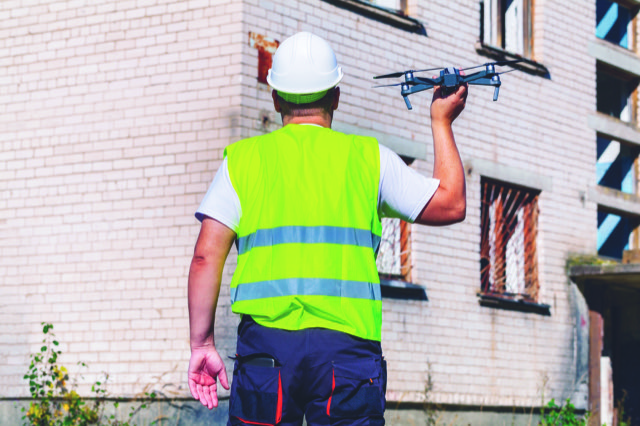 “I remember being very nervous the first time I flew one. When someone hands you the remote control to a $1500 toy that’s a big responsibility,” says Ritt.

Whether your company’s planning to start its drone operations in 2019 or you’ve flown 108 flights, keeping up with regulations is imperative. Regulations for drones changed in October with the new Reauthorization Act of 2018. This new federal law repeals the Special Rule for Model Aircraft and establishes new conditions for recreational drone use. These are some of the key points to consider when using unmanned aircraft system devices (AKA drones) weighing less than 55 pounds:

It’s unlawful to operate multiple unmanned aircraft simultaneously. Drones can be used from 30 minutes before official sunrise to 30 minutes after official sunset or in the twilight with appropriate anti-collision lighting. Drones can be flown a maximum of 400 feet above the ground– higher if they’re within 400 feet of a structure– at a maximum speed of 100 mph (87 knots).

Drones can carry external loads if they’re securely attached and can maintain quality flight characteristics and controllability. You also may transport property for compensation or hire within state boundaries provided the drone, including its attached systems, payload, and cargo weighs less than 55 pounds total. Any operation that results in serious injury, loss of consciousness, or property damage of over $500 must be reported to the FAA within 10 days.

Becoming or Staying a Pilot

Drone pilots flying under Part 107 must register each drone they intend to operate.  They must be Part 107 certified to fly drones for non-recreational purposes or be under direct supervision of such a certified person. Pilots must be at least 16 years old to qualify for certification, which can be obtained in two ways:

Pass an initial aeronautical knowledge test at an FAA-approved knowledge testing center.  Those with Part 61 pilot certification must have completed a flight review in the previous 24 months and take an FAA-provided small UAS online training course.

The initial aeronautical knowledge test covers several areas outlined by the FAA. Prospective drone pilots can self-study with an abundance of YouTube tutorials and other free online documents. Structured courses are also available and vary in cost. Plus study guides paired with practice exams are easy to find and range from $50-300. The electronic exam is conducted at an FAA-regulated testing center over two hours and requires a score of at least 70% to pass, Ritt says.

These are some topics tested:

Whether you’re just starting out or have some experience under your belt, it’s always a good idea to brush up on safety tips. Here are some outlined by the FAA.

It can be cumbersome to remember all the rules and regulations for each flight. Therefore, the FAA has created B4UFLY, a free smartphone app that points out restrictions or requirements in effect at the location where an unmanned aircraft pilot wants to fly. Key features of B4UFLY include:

The app is available through most app stores or can be downloaded from app stores. Learn more about it here.

We’re just beginning to see how drones will change our world. Think of how pervasive the Internet is compared to how most of us first saw it in the mid-1990s: a few websites and mostly an extension of email.  ExpandedRamblings.com provided some eye-popping numbers on how our skies might look come 2020. Check out these figures, which were compiled between 2015 and 2018: