An Introduction to Lasers and Laser Level Technology

Laser levels have been in the market for quite a few years, but only recently have they become a mainstream tool for professionals in the masonry construction industry. A laser level is a control tool based on a laser beam projector. The projector projects one or more fixed lines or dots along the horizontal and/or vertical axis, enabling the person using it to align their work to these lines or dots. Some laser levels combine lines and dots.

Masons use this device for aligning plumbing walls and metal studs. It is also used to help maintain plumb walls with vertical applications for taller walls being constructed. As well as to help check the leveling of laid block and brick while ensuring the building/project is square.

Laser levels are also useful for outdoor applications. Landscapers use these devices for various leveling projects like terracing and retaining walls.

For laser levels, there are three main categories. The most basic is the fixed laser level, which features a laser diode attached to a spirit (bubble) level that serves as a pointer. The vials are used to level the dot or line. These lasers are used for jobs that do not require great range or accuracy. Rich Morse, Stablia’s Product Marketing Manager agrees, point and line lasers are best used for close ranges and small projects.

Self-leveling lasers, commonly called pendulum levels,are more advanced and offer greater accuracy and faster results. Rather than depending on a person to align it, a self-leveling laser is based on a set of laser diodes mounted on a pendulum, that are calibrated when the pendulum is still at its natural position, where the diodes will emit leveled or vertical lines and dots. The line is created using a prism (lens) that converts the laser beam into a line. The main advantage of this kind of level is its much higher accuracy, compared to fixed laser levels. Good self-leveling lasers may reach an accuracy of ±0.2mm/m – ±0.0002″/1″.

The main drawback is they are relatively sensitive since the pendulum, by nature, is a moving part. To protect the pendulum, whenever the product is not in use, the pendulum is held in place by a locking mechanism that is released only when the laser level is turned on. This locking mechanism also enables the use of the device in manual mode. In this mode, the lines and dots are not leveled, but a cross laser level could still be used for marking straight lines and 90-degreesquaring. A self-leveling laser level suffices for most jobs with areas up to 60-100 feet (depending on the model). If the area is greater, or the job requires a level that covers 360 degrees, then a user may want to upgrade to a rotary laser level. This range may be almost doubled using a detector, which is a special device that detects the laser beam even when it is no longer visible to the user and indicates it.

The third type of level is a mechanically leveled laser, also known as a rotary laser level. Rotary laser levels are typically positioned in the center of the jobsite with its laser beam casted all around to get a complete 360-degree read. These devices use a mechanical gyroscope to sense the center of the earth and an electronic servo motor to establish the leveling of the laser emitting diodes. Most of the lasers in this category are rotary lasers, in which the diode is positioned at the center and is rotated by a motor to create a vertical 360-degreeline.

Since the beam in these models is not split into a line by a prism, but rather rotates, a much longer range may be achieved, in some cases even beyond 700 feet using a detector. This reason, as well as the ability to slope the line, make it most suitable for outdoor jobs. Some models come with an optional trivet, which allows the product to operate when placed on its side and project a vertical plane that is designed to take a reading on a grade and sometimes tilt the plane of the beam. 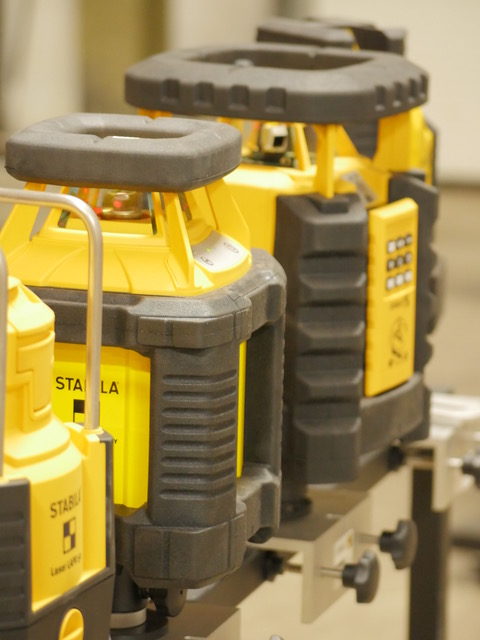 A few years ago, the technology of 360-degree lenses was introduced to the market and became very popular. The advantage of this technology is that you can achieve three 360-degree, uninterrupted lines. However, this technology also has two slight disadvantages. One is that the plumb dot, which is actually a cross, is not centered underneath the level, so when rotating the level it moves in an excentre pattern, which causes you to lose the center of the position. The other disadvantage is that, due to their construction, these devices are less robust than visor self-leveling laser levels. These levels also tend to be slightly less accurate than visor levels at the same price range.

To get the best of both worlds, in the last year, the market introduced self-leveling levels that combine visor with 360-degree constructions. Typically, the horizontal line would be 360 degrees and the vertical lines would be based on a visor.

Another trend in the market that is being introduced are self-leveling laser levels with higher ingress protection (IP) rating, with an IP rating of 65 being the highest. While this might seem to the users as an important improvement, it increases the product’s cost quite a bit, while for most of the users who use these devices indoors, this feature is practically meaningless.

Aside from considering the product’s IP, we would recommend focusing on the following features when deciding which laser level to choose:

1. Range. Pulse Mode, in case you wish to extend the range using a detector.

Laser Suffer A Fall? Here’s How You Check:

1.Set up the laser on a tripod or on a solid surface at a distance of approximately 5 feet from a wall that is about 16.5 feet long.

Laser accessories are designed to enhance the versatility and functionality of a laser level. The main categories are mounting accessories, which include light tripods and brackets. Other categories include semi-professional to heavy-duty tripod and poles. While tripods are considered more stable and versatile for any landscape, poles are used indoors. Poles have the ability to let the user shift the level between various heights much quicker and easier. Some poles are stabilized by a tripod base while others are pressed against the ceiling for stability. Brackets are also used whenever a more local mounting of a laser level is required.

Digital receivers are designed to accurately find the position of rotary lasers with red laser diodes that can be found over larger distances. This high-tech piece of equipment can be attached to a metal rod to help simplify and make the measure process more efficiently. The receivers can also be used as handhelds, which helps with jobsite portability and ease with each handheld having at least 50 hours of battery life with one charge.

One concept that was recently introduced to the market is a self-leveling laser that has its own legs. This lets the user use the product without needing a tripod, and when the legs fold, they construct a frame that adds protection for the device.

Beam-finders and targets are passive accessories that enhance the visibility of the laser beam. Beam-finders are glasses that help you see the beam. For red lasers, you need to use a red-beam finder. For green lasers, the user needs a green-beam finder. Targets increase visibility by reflecting the beam. They can be placed on a surface or hung using a built-in magnet. With targets, each laser has its own color of target.

As previously mentioned, in order to maximize the distance of a laser level’s beam, a detector would be used. In order to be able to use a detector, the level needs to have a Pulse Mode. This mode modulates the beam at a certain frequency that can be detected by the detector. For each color of laser, a detector of that same color needs to be used.

As technology continues to advance, industry leaders predict that over the next few years laser levels will become the tool used by a majority of professionals in the field to perform most of the applications for which bubble levels are used today.