We’ve all been there. Bought an expensive smartphone and protected it with the best case that we could find, either to extend the battery life or protect the device (or both), and then the unthinkable happens. We drop the phone in the driveway, or we spill a drink the phone was sitting next to. In that moment of panic, we wonder if we’ve lost our photos, apps, memories that were stored on the device. Sure, most people back things up to the cloud, but it’s still a gut punch when the accident happens.

For mason contractors, much more than the average smartphone user, the devices are subjected to a rougher environment. Occupational hazards are part of the job, and while OSHA mandates standards for the health of humans on a job site, there’s no equivalent for the technology. While the notion of an OSHA for devices is absurd, it’s increasingly important for contractors and their teams to have equipment they can depend on in the sometimes-harsh environments.

A Name You’re Probably Familiar With

Enter a name that everyone in the construction industry (and beyond) is familiar with. Caterpillar. We had the privilege of (torture) testing out the Cat S41 and S61 in our office. You might be asking what on Earth Cat is doing entering the space dominated by Apple, Samsung, and LG. Rightfully so. But, if there’s one thing the brand knows, it’s about construction. Well, as you’ll probably read, they might know a thing or two about smartphones.

Rather than trying to develop something on their own separate from the Apple or Android environments, Cat smartly hitches its wagon to the Android operating system. Those wondering why Apple’s iOS isn’t on the menu, it’s because it’s not possible. Apple controls the hardware AND software for their devices.

The quicker, and still-effective way to create toughened smart devices for construction professionals. Those concerned about the with the software side of things will be relieved to hear that the devices ship with Android Oreo (8.1), and will be upgradeable to Android Pie (9.0). It’s the latest and greatest version of the software on board, not some old version that isn’t up to snuff for people focused on productivity.

Now, to the devices themselves. The two phones we took a look at were the Cat S41 and Cat S61. Both phones are manufactured by Bullitt Group for Caterpillar. In our testing, both devices seemed like they would hold up to the stresses of being on a heavy construction site. That’s not to say the devices won’t come out looking brand new, but the functionality and (more importantly) the information on the phone should survive.

While we feel either phone would be suited to be used by mason contractors, the higher-end functionality found on the S61 makes it a compelling option and the one we’d recommend more. However, both are definitely worth a look if you’re thinking about upgrading to something more durable.

Both phones feature access to Cat’s App Toolbox, which features a wide variety of apps that are useful both on a job site and during free time. Sports & Outdoor, Construction, Rugged Work and Tools, Lifestyle and Hobbies, and Weather and News are all Categories of content that mason contractors might find useful. 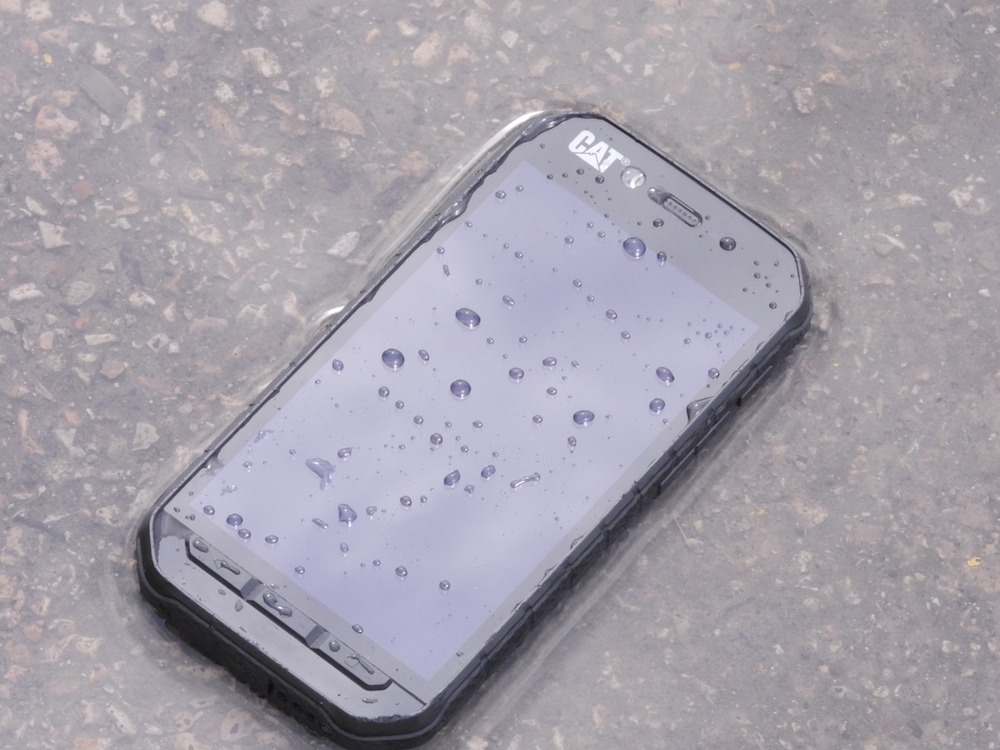 While the Cat S41 is the lower-end phone, as the name suggests, it’s by no means underwhelming. One of the most impressive features, derived from industry research, is a 5,000mAh battery featuring Battery Share. For comparison, Apple’s iPhone X featured a 2,716mAh battery. In the S41, that translates to 38 hours of talk time and a whopping 44 days of standby time. Interestingly, the Battery Share feature allows for users to charge other devices from the smartphone.

The phone features a 5-inch Corning® Gorilla® Glass 5 screen that can be used when fully wet or when you’re wearing gloves. Additionally, storage can be expanded up to 128gb. That’s not something Apple currently offers on their phones, so if you’re the kind of user who has a lot to store and can swap out SD cards, this phone is worth looking at. The phone also features a programmable key, which can be used for Push To Talk, SOS, the flashlight or camera.

In terms of the “toughness” credentials, the S41 features an IP68 rating, which is the highest standard that the International Electrotechnical Commission has set to determine the dust and freshwater resistance of devices. According to Cat, the S41 is waterproof to two meters. The only caveat of being waterproof is that all the components and covers are closed properly prior to being subjected to moisture. Not a problem in most situations, but it could cause an issue if you’re charging the phone or another device from the phone.

It’s also Drop Proof up to 1.8 meters. In our tests, the phone did not come unscathed but survived and kept working flawlessly. Don’t worry about extreme temperatures either, as the phone can be used from -77 all the way to 122 degrees.

Our favorite feature in addition to the phone being tough is the Underwater mode. Not so much for mason contractors on the job site as it is for the free time with the family, this mode locks the touchscreen but allows for underwater photography using the volume keys. The Cat S61, the flagship of the series, features the same toughness certifications as the S41, however, it goes a step further with IP69 certification. This means the phone is protected against close-range high pressure and high-temperature water jets. It’s tested in terms of drops, submersion, salt mist spray, and can also take underwater photos and videos.

The more compelling features of the S61 are not the durability or software. The flagship features an Integrated Thermal Imaging Camera, Laser Assisted Distance Measuring, and an Indoor Air Quality Monitor.

The Thermal Imaging Camera is not only cool to look at, but can be particularly useful for mason contractors who want to check the insulation on a job site. The camera can be used in Photo, Video, and Time-Lapse modes in real time. There are several modes to view the temperatures, and you can see the scale of temperatures on the right of the screen. The phone auto-calibrates itself to remain accurate.

The Laser Assisted Distance Measure is used to get estimates for point-to-point distances and area. It can be used to help come up with the amount of material needed for a job. In our calls with Bullitt Group, though, they stressed that these are just estimates and should not be used for precise measurements. The app also needs to be calibrated before use, which may take a few minutes. 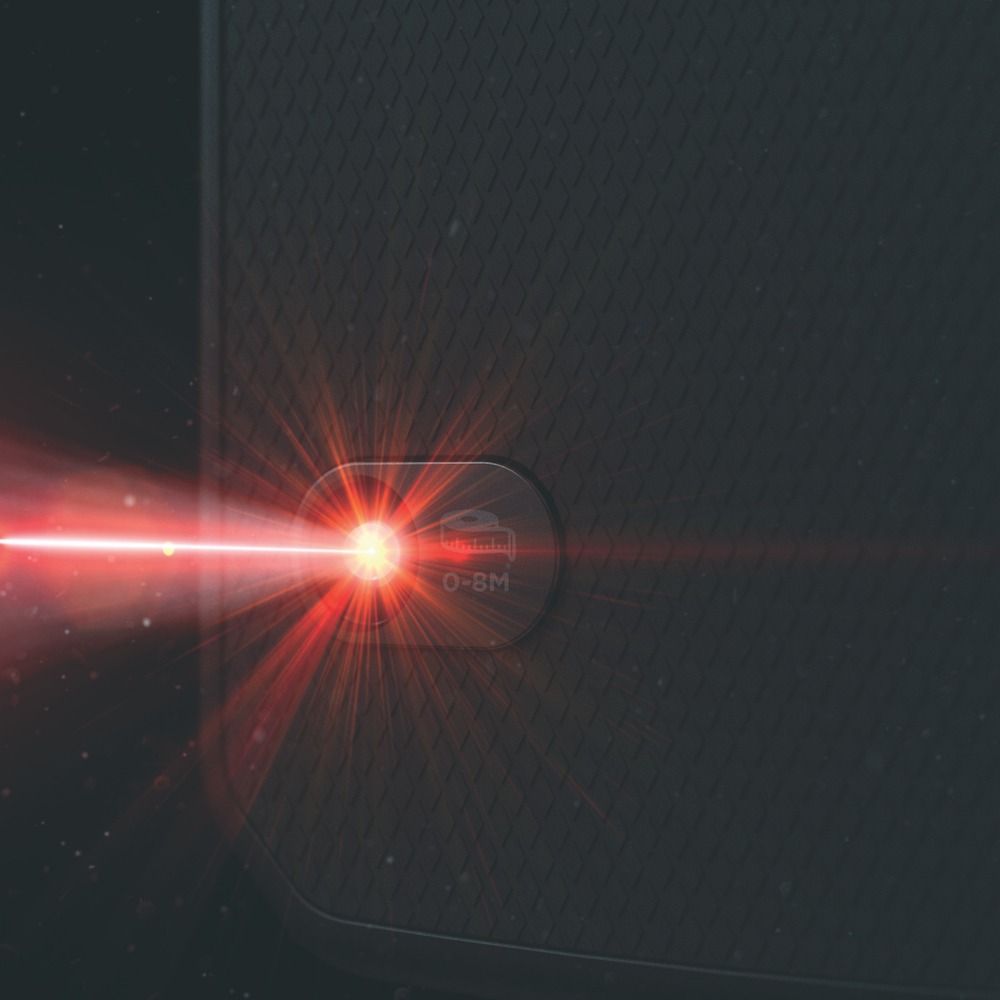 The most compelling feature for mason contractors, particularly for the potential future iterations of the phone, is the Indoor Air Quality Monitor. While not explicitly designed for silica measurement on a job site, it can give you an overall feel for the air’s quality. Upon first opening the app, it may take 36 hours for it to calibrate. The display shows a current “parts per billion” value and will display a color depending on the quality of air. Additionally, it will show a 24-hour view of air quality throughout the day. Humidity and air temperature are also displayed here.

By swiping on the Air Quality screen, you can see a graph of VOC levels. You can see the display for several different time periods by tapping. With one more swipe, you can see a full week of historical data, which is useful for spotting patterns throughout the day. You can also set alerts that will notify you of POOR or UNHEALTHY AIR.

In our tests, the air quality sensor was particularly useful. While our conversation stressed that this isn’t a replacement for silica testing on a site, it can give contractors a good idea of what’s happening with the air quality. Future iterations of the phone will have to be designed to measure silica specifically, but the potential is there. While you cannot simply show the phone to an OSHA inspector who shows up on the job site, we stressed to Bullitt Group that one day getting there would be a huge benefit for those in our industry.

In conclusion, we find the two options we tried out to be compelling options for mason contractors. On a job site, the durability certainly seems unrivaled, even if the phone shows some of the battle scars of a drop. Software-wise, both phones are updated to the most secure and efficient version of Android. If you’re an iPhone diehard, you may not want to dabble in the Android environment. However, if you’re an Android user already or open to exploring the phones, we certainly think they’re worth taking a look at.