Working with existing masonry buildings presents many unique challenges. The materials and construction methods used may have been (and often were) drastically different than they are now. Certain construction methods considered standard practice today were not utilized historically, and were often not necessary. It’s important to keep the historical context in mind when working with an existing building, and consider its long-term performance and exposure. Sometimes existing conditions appear alarming, but the building may actually be stable and performing adequately, while other conditions may be a sign of a serious structural defect. Here, we define some of the various elements that many buildings are composed of, and some basic performance considerations:

Parapets walls are the portion of the wall around a building perimeter or any secondary building edge that extends above the roof level. The primary purpose of parapets is to prevent the spread of fires, but they may also be used for safety of occupied roofs or for architectural reasons, giving the appearance of a taller building and screening roof-top equipment.

Parapets are often the source of many problems within a building. Inadequate flashing, general weathering and lack of maintenance allow for moisture infiltration into the building leading to any number of moisture related conditions. Because they are exposed to the elements on three sides, they are particularly vulnerable to weathering. Parapets are also vulnerable to overturning from wind and earthquake loads. For resistance to wind loads, a general rule of thumb is that parapets must have a thickness of at least 1/3 their height. Some seismic evaluation guidelines require parapets to be braced if their height-to-thickness ratio is greater than 1.5.

In new masonry, movement joints are built into walls to accommodate thermal movement, brick expansion, and concrete masonry shrinkage. Expansion and control joints are required for nearly all new masonry construction but are rarely seen in older buildings. In historic construction, the softer lime based mortars allow for more movement than contemporary cement-based mortars, and movements are accommodated within the wall. When considering adding expansion or control joints to an existing building, keep in mind that doing so may affect the overall performance of the given masonry wall and will drastically affect the visual reading of the building architecturally. 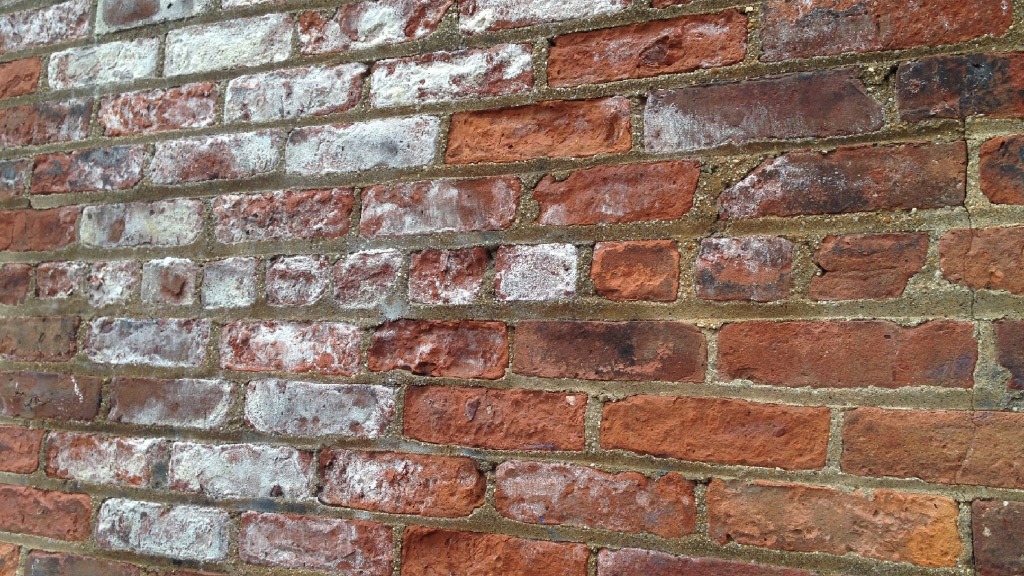 Brick faces are spalled, most likely as a result of freezing damage. Efflorescence deposits indicate moisture is moving through the wall.

Freezing-related damage occurs as a result of trapped moisture expanding in freezing temperatures and contracting as the moisture thaws. As water freezes it expands up to 10% and this can cause significant stress in masonry. Damage may show as deterioration of the brick face (cracks and spalls) or as large scale damage in the form of cracks and bulges in walls. Depending on the brick’s pore structure and strength, freezing damage can occur quickly from just a few cycles or as a progressive long term problem over many cycles over many seasons. 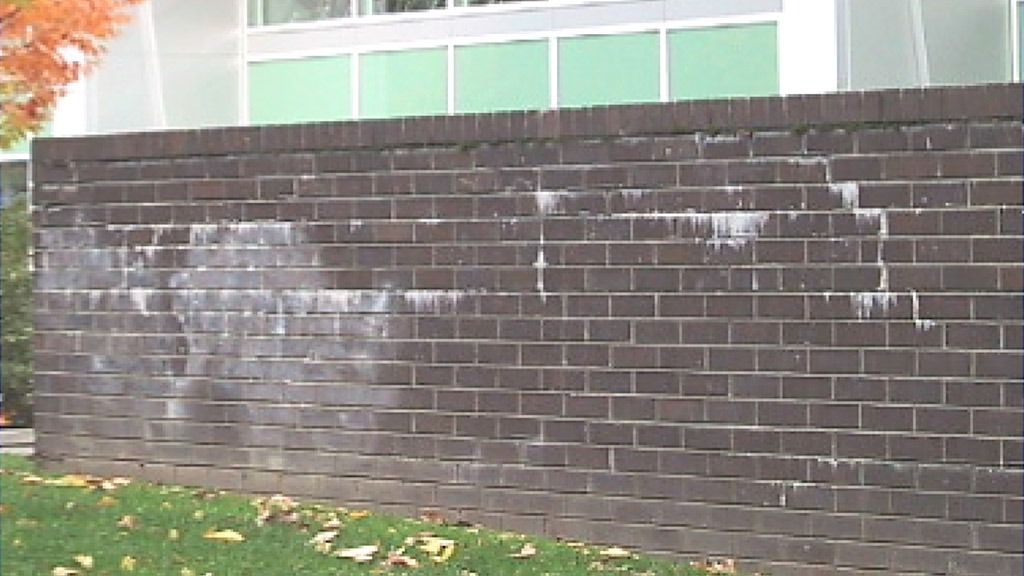 White calcite (or lime run) deposits show as hard, crystalline deposits, often weeping from points where water is running through the wall.

Efflorescence is a white, powdery deposit that forms on an exposed masonry surfaces, caused by the leaching and crystallization of soluble salts from within the material. Many efflorescence deposits are soft and powdery, and can be brushed off the wall. Calcite deposits, often called “lime run”, occurs over many months and years as water movement through the wall carries lime to the surface. Lime converts to calcite at the face of the wall, forming hard crystalline deposits that are difficult to clean. 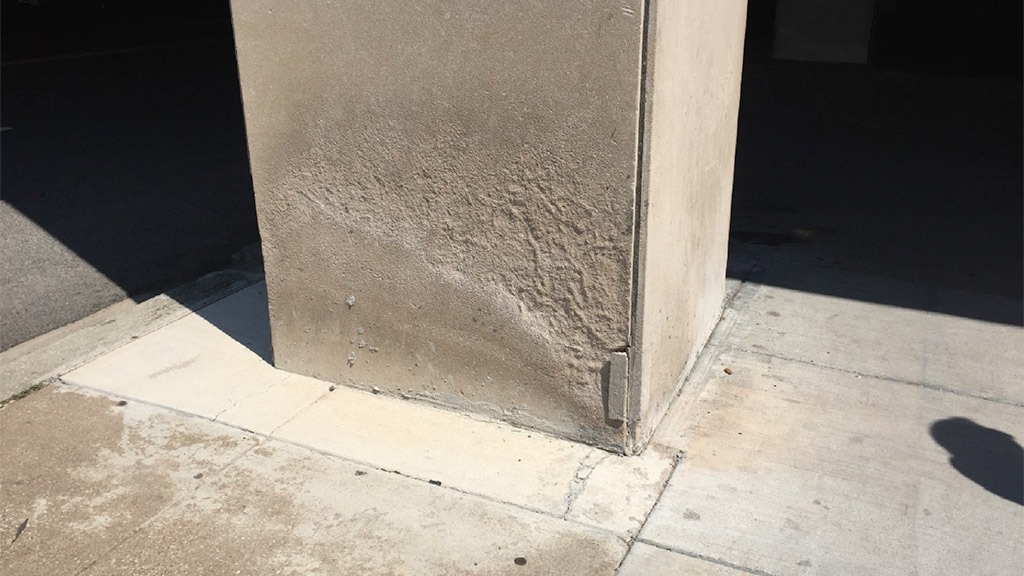 Rising damp at the base of a stone veneer. Water carries salts up into the stone, where they are deposited as the moisture evaporates. The upper limit of rising damp shows as stone damage outlined with white salt deposits.

Rising damp is the common term for the slow upward movement of water in the lower sections of walls and other ground-supported structures by capillary action. This occurs when ground water travels upwards through porous building materials such as brick, stone, or mortar, much in the same way that oil travels upwards through the wick of a lamp. Rising damp is identified by a characteristic buildup of deposits on the lower portion of the masonry wall caused by soluble salts (particularly nitrates and chlorides) contained in the groundwater and leached from the building materials. Due to the effects of evaporation these salts accumulate at the highest point of the rising damp, making the line of effect easy to recognize. The most common sources of indoor moisture at the base of walls in buildings leading to rising damp are from defective ground and surface drainage.

Localized bulging is differential movement of the masonry in plane with the wall that is usually observable with the naked eye. It can occur in a very small area such as at a corroded lintel or anchor or it can be wide spread over a larger area such as along a corroded spandrel beam or failing parapet. Bulging poses a significant safety risk as it may be a sign that loose material my fall away from the building at any time. This condition is usually a result of freeze/thaw or embedded corroding metals.

Spalling of masonry is the failure of the outermost surface of the masonry units and can be caused by a number of conditions including, but not limited to, freeze/thaw cycles, underlying rusting steel members, subflorescence (crystal growth) within the brick units, and internal weathering from trapped moisture within the unit. When spalling occurs, the durable ‘fireskin’ of the brick unit is lost, and the softer less durable core is exposed to the elements. This softer material rapidly deteriorates and produces the same end result as the bricks being underfired. 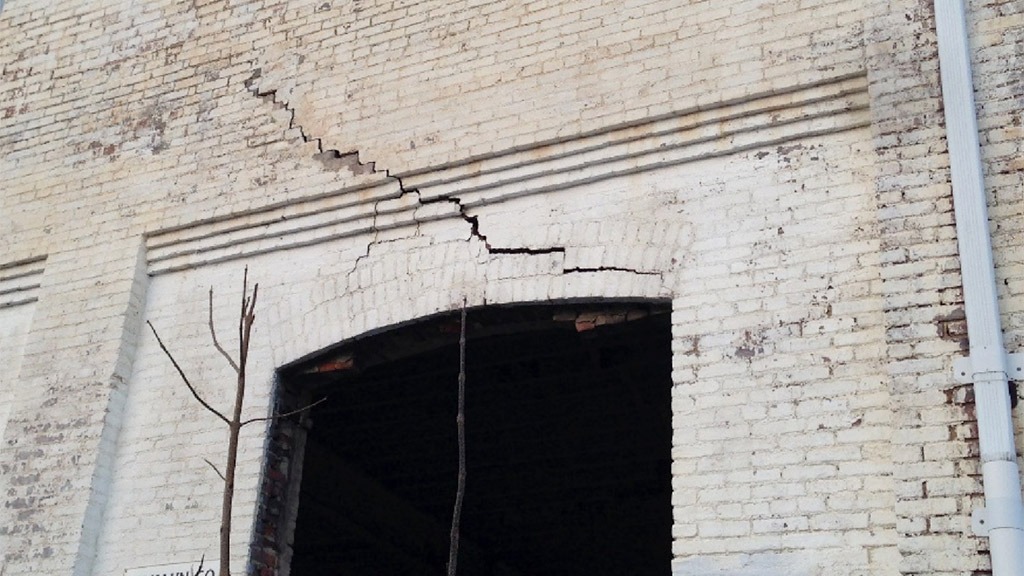 Cracks above this arched door opening may lead to collapse – time to install shoring and get an engineer involved.

It is important to note if the cracking is isolated to the mortar joints or if cracking extends through masonry units. Location and direction of cracking is also important; diagonal cracking is often considered a sure-tail sign of differential settlement, but when it occurs at the corners of window heads, a corroding steel lintel could easily be the culprit. Other possible reasons for cracking include, but are not limited to, embedded corroding metal within the masonry (lintels, columns or spandrel beams for example), freeze/thaw failure due to trapped moisture, or overstress from loading.