Philadelphia’s City Hall is the world’s largest masonry building made of brick, white marble, limestone and granite. This historic structure leaves visitors lingering in awe. Humans have had more than a century to acclimate to skyscrapers, and while this is a tall building indeed, stretching up to 548 ft. above the pavement, tens of thousands of people from all over the world stand on that pavement annually just to take in the building’s immense scale.

It’s curious to think it got its start in the middle of the 19th century, before the first cannons were shot in America’s Civil War. Philadelphia was an industrial center and textile capital, the country’s second largest city and one of its wealthiest. For a generation debates about building a new city hall there ensued, mostly about location. 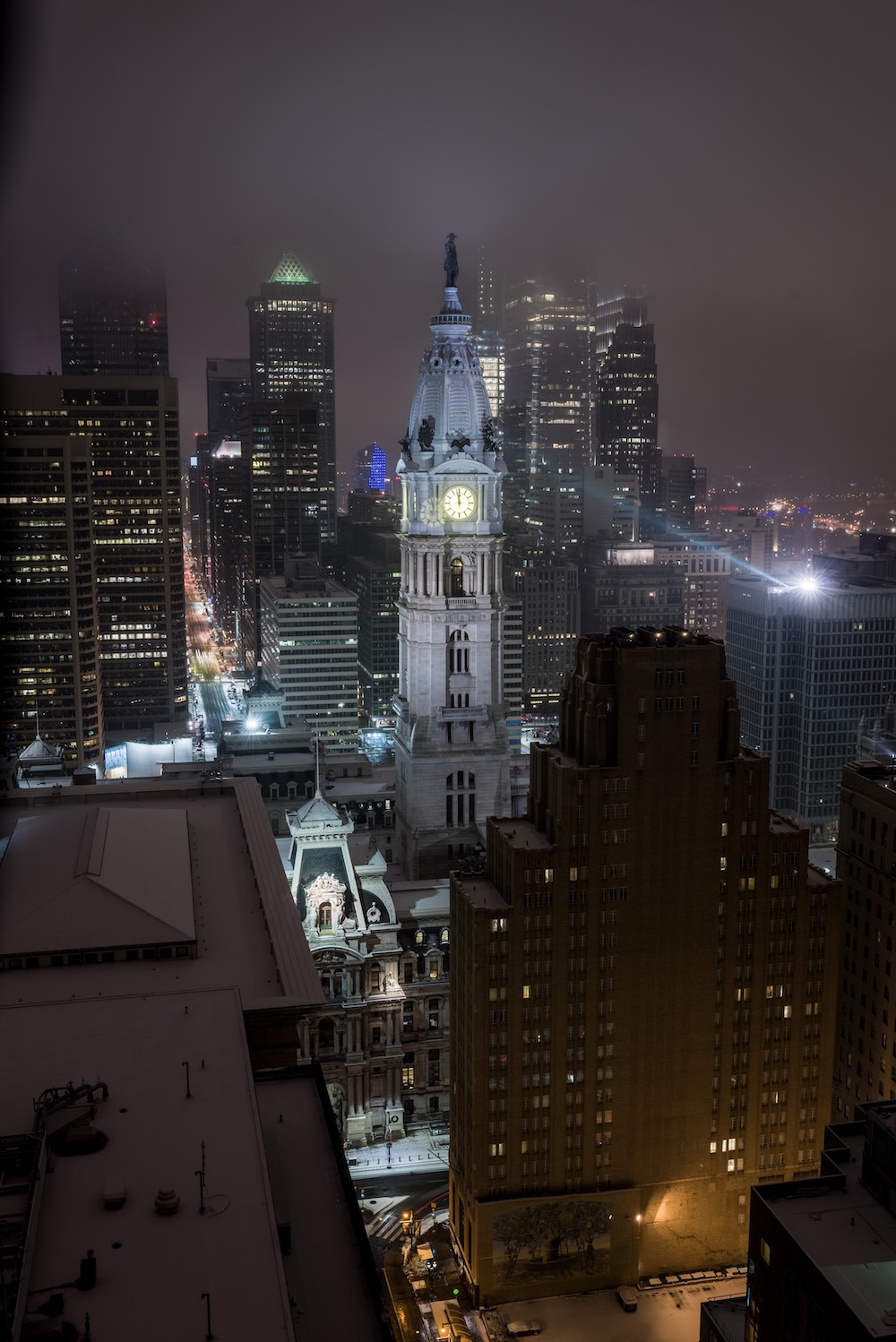 Some wanted it in Penn Square, others in Independence Square, and still others in Washington Square. It was like any NIMBY debate heard in city council meetings and small and large towns across the country today.

Then, like now, debates about its address waged in newspapers and political chambers. They created a wedge between citizens and businessmen. To the public it finally went for a vote. Penn Square came out victorious, one of William Penn’s five planned parks, a five-acre plot of land that, according to Philadelphia’s City Hall by Allen M. Hornblum and George J. Holmes, had once housed a public gallows.

After another series of battles delayed the commencement of building, architect John McArthur Jr. won a competition to design it. His plans took up an entire city block, aiming to give Philly claim to the world’s tallest building. The colossal square construction of brick, marble, and granite was arranged around a central public courtyard, which citizens could enter easily from four monumental arched portals. It bore mansard roofs, ornately sculpted columns, tiered dormers, and long windows that gave the illusion its six floors were only three. These were characteristic of the French Second Empire style, then very fashionable.

Real estate, however, like architecture, changes. Especially considering the seven-story building took 30 years to come to fruition. All that squabbling about location had been for naught. Penn Square had been at the time of the first public vote the center of the city, but Philadelphia grew a lot in those three decades. It no longer bore the central location it once had.

Nor did the building receive the fanfare McArthur had expected. The Eiffel Tower and Washington Monument, both recently finished before City Hall’s 1901 completion date, denied the architect a claim to fame. Little fanfare in the dubious eight-year claim of being the world’s tallest occupied building when in 1909, even that title went to another building, the Metropolitan Life Building. City Hall at least held the title of Philly’s tallest until 1987. However, by this time McArthur was dead and was replaced by William Bledden before he saw the doors open to the public.

The Philadelphia City Hall we walk through today, still functions as a proper municipal center, and has 700 rooms. Some 88 million bricks and thousands of tons of marble and granite comprise this structure and helped it rise to the title of the world’s highest masonry load-bearing structure.

Though McArthur’s design called for virtually no sculpture, stonemason William Struthers and sculptor Alexander Milne Calder were responsible for the more than 250 sculptures of nature, capturing artists, educators, and engineers who embodied American ideals and contributed to this country’s genius. Several of those sculptures are of McArthur, including one in which he’s covered only in greenery.

None of the sculptures, however, commemorated war, even though the US was still heady after the end of the Civil War. This placid sculptural character came out of respect for William Penn, a Quaker (and therefore pacifist). The war memorials seen on the city hall campus today came much later.

The marble used to create these art forms went on quite a trip before landing at the site from Lee, MA. It was shipped to then put on barges at Long Island Sound, floated down the Delaware and Raritan canals to the Schuykill River into the city, where, between Chestnut and Locust streets Struthers cut the stuff and sent it to the building cite. The largest block was said to be 36 tons, according to Philadelphia’s City Hall.

McArthur might at least grin from his grave to know his precious building is the world’s largest all-masonry structure, the book claims, which is quite impressive when thinking of the Great Pyramids in Egypt. No steel skeleton supports it. That’s why the basement’s granite and limestone walls are 22 feet thick. (Though metal supports were used in the tower.)

Calder came from Scotland at a time when his compatriot craftsmen considered decorative sculpture out dated. Fortunately for us he had been trained by fine sculptors in Europe’s centers like London, Paris, and Edinburgh. His landing the prestigious gig of fashioning the Penn statue atop city hall, and what came after that, proved that America was the land of opportunity. After his first iteration of the statue took form as a nine-foot tall clay model, he enlarged it and enlarged it and enlarged it until reaching a height of 37 feet. By 1888 he and his crew made a plaster cast of it but then had to turn their attention elsewhere.

Sculptural decor on a building designed today may be something all but archaic. Those sculptors, however, were creating technical feats. They actually had to wait for technology to meet their needs. Technology wasn’t ready to deliver what would supposedly become the world’s largest bronze sculpture.

It was 1894 when Tacony Iron and Metal Works delivered the 27-ton, almost four-story bronze statue in 14 pieces through the city to the building site. The city decided to leave it there for a year, accruing ooohs and ahhhs from the denizens who, witnessing that bronze Penn’s arm alone ran 12 ½’ long, would have a view no one else would ever again have of the famous statue. Then they broke it down into more than a dozen still-large pieces and raised them to the top of the building.

Today, from a door in the hat of Mr. Penn, steeplejacks can climb atop one of the tallest points of the city for any maintenance needs. Sometimes they climb up there to support local teams, dressing him in hats or other paraphernalia from beloved sports teams such as the Flyers, Eagles, and Phillies.

You don’t have to be a mountain goat to glean similar views as the steeplejacks, though. Visitors have for a century ridden sky high in an elevator to the observation deck to take in transcending views of the city. While admittedly it is inherently difficult to see the building’s abundant sculptures from the common perspective from the ground, there’s so much to see that even those who pass it every day for years could regularly see something new.

Philadelphia’s City Hall, with its seemingly unending sculptures and carvings, proved a once-in-a-lifetime opportunity for Calder, as has been stated above. A team of studio assistants helped him turn clay ideas into plaster then the stone we see today. Some of those assistants may have also stood as models for the 94 freestanding figures that stand twice the size of a human. His son likely did too.

Because Philly’s first settlers were Swedish, one sculpture shows two Swedes and two Iroquois (or Delaware; Penn dealt with both often in the founding of Philly). Animals such as bison, elephants, horses, and birds also appear. A section of one of the structures features eight cats lively in their work as hunters. Yes, cats. Ostensibly this was done out of respect for Public Buildings Commission chairman Samuel Perkins, a rather passionate fan of felines, who played an integral role in the building’s erection. They probably meant something else entirely to workers and residents visiting the building when it seems periodically embattled with an infestation of either real life cats or rats or mice. 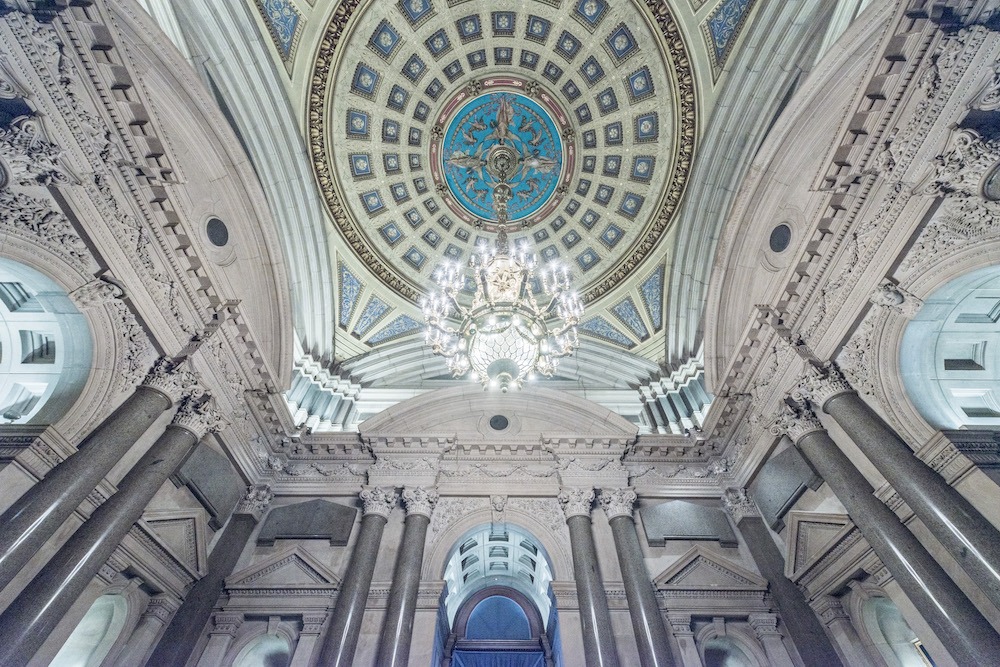 Now consider another side of the structure: the south side, where the court and judicial system are situated. There within the sculptures are the face of Moses and corresponding figures of Justice (a blind-folded woman) and Law. And on the west side, where prisoners used to enter for court proceedings, figures like Sympathy and her companions Prayer, Meditation, and Repentance keep watch. There is furthermore one of the prodigal son asking forgiveness.

The east facade features the figure of Ben Franklin, remnants of whose house is just down the road but whose life remains an omnipresent force around the city. The figures of Industry, Peace, Art, and Science, figures of qualities irrefutably characterized by the polymath, also adorn that facade. This is also the place where Architecture reclines, an image of City Hall’s tower rising over her shoulder.

Meanwhile up on the clock tower, four massive marble columns feature rather captivating capitals. Traditional figures of men from Asia, Africa, and Europe, and an American Indian seem to stand side by side, seemingly working in harmony to lift the weight above.

Not everything there is to see about City Hall is visible outside. Step inside this National Historic Landmark and notice a place that hasn’t changed much in at least 60 or 70 years. Some of it even looks like it might have upon opening to the public 117 years ago. It’s a testimonial to preservation that the space is still very well used by the citizens of Philadelphia. Folks are still getting marriage licenses, adopting children, having their day in court, paying parking tickets, recording mayoral press conferences all across the 14 acres of floor space. The letters and numbers on office doors, the clocks, the granite stairwells, and that endearing old library smell sent many of us back to a time before we were even born.

The seemingly flying marble staircases at each of the building’s four corners are a thing of breathtaking wonder. Philly-born architect Thomas Ustick Walter, designer of the cast-iron dome atop the Capitol Building, designed these cantilevered stairways too. Each of which was carved using a single slab of Cape Ann granite. Their lack of visible means of support demonstrates the real scientific component of architecture.

The campus that is Philadelphia’s City Hall truly deserves to be known as an American Treasure. With its lush interiors and its Where’s Waldo-esque sculptural exterior embellishments, it has sustained a commanding presence that McArthur, Powell, Calder, and Struthers could rightly be more than proud of. Certainly Penn would recognize it as a monument to the country.

In the night sky, even amid slick glassy skyscrapers, it catches the eye. It’s grand and beckoning. Its ornate decor delights in a way that fickle fashion cannot negate. And for generations to come, City Hall will continue to entice people to discover the stories almost audible in this fine example of masonry.

Here are some other notable elements of the building: