One of the largest challenges facing the masonry industry is generating interest in the younger generations. Providing written marketing materials and social media posts are one way to stimulate the future generation of the trade, but in-person, hands-on events take the experience to the next level. In order for these events to be successful, the buy-in has to come from all facets of the masonry industry, educational systems, and the communities that are served by them.

North Carolina’s Masonry Education Day, which took place during the state’s Apprenticeship week, was one such experience. The reason this particular event was so successful can be attributed to the efforts of the local communities and schools, masons, suppliers and manufacturers.

Ryan Shaver, the National Director of Sales and Training for ProBlock and advocate for workforce development within the industry, gathered all the players for a day of immersion within the trade. The organizers leveraged the regional Fastest Trowel on the Block Competition, held at Ben Ketchie Park in Gold Hill, North Carolina on November 15th, as the stage for young students to see their potential within the industry.

“We’ve got to get more youth involved in our industry, so by doing events like this we want to get that excitement back,” said Shaver, who taught masonry for seven years at Mt. Pleasant High School. Judging by the turnout, it certainly seems like Shaver knows how to make it happen. Over 400 students from nearly 20 schools across the state registered to participate in the event. 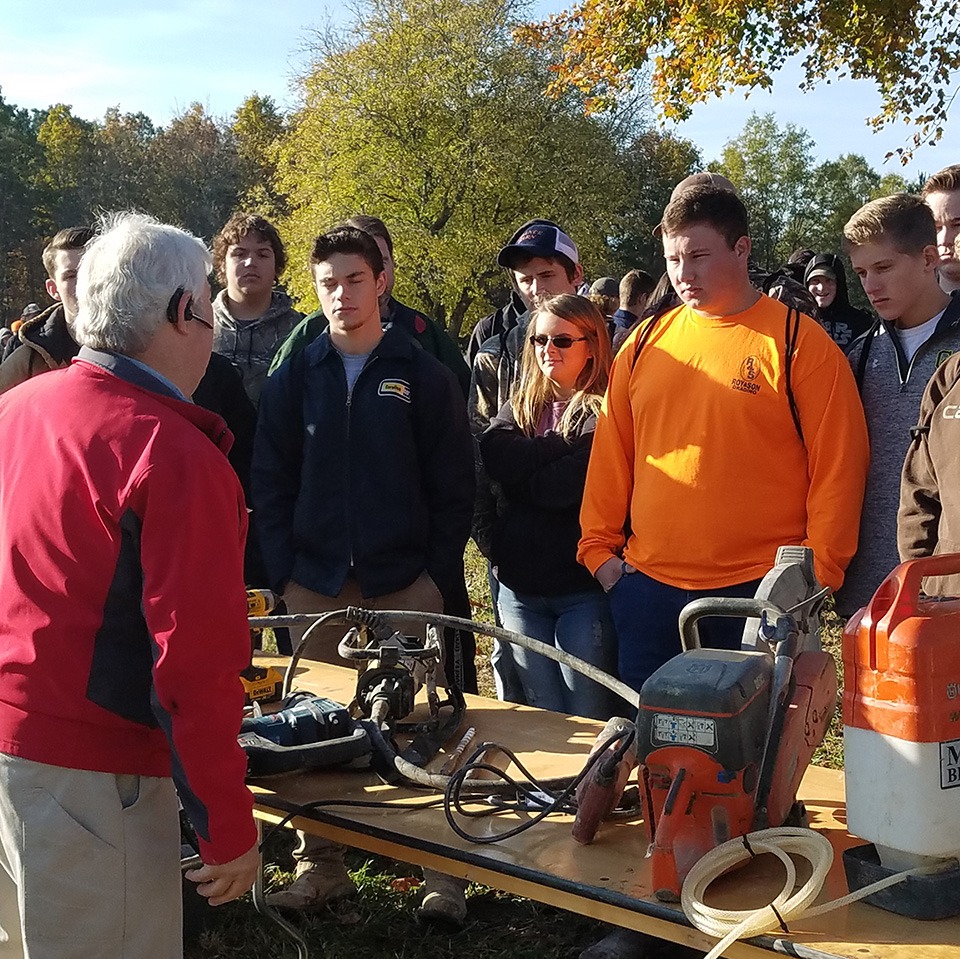 “First, we wanted to educate [students] on the opportunity within the industry. The second thing we want to do is expose them to things they couldn’t see at school, like scaffolding, equipment, things that you can only see a picture of on a computer or in a book.”

In classrooms both in schools and the field, trust is a key component to the successful education of students. In order for the intended reception, Shaver had to create a specific atmosphere for the young potential workforce. He drew from his experience as a high school educator for his inspiration.

“[I wanted to] show things that students wouldn’t ordinarily see within the industry; the opportunities and careers that are available. You don’t necessarily see that in school.”

Nearly 30 mason contractors also attended the event, and were paired with the groups in order to answer any questions and shed some light on the trade. By combining the communities for one event, the contractors and students created a relationship. It allowed students to have their questions answered while also getting to hear from professionals who make their livelihood in the trade. Most importantly, it allowed students to step outside of the classroom and get some field experience.

“Out here it’s more relaxed. Contractors get to actually talk to the students one-on-one. The student will remember who they were with that day. When that student graduates, we want them to remember us,” says Shaver.

The day kicked off with three tutorials which discussed: equipment operation, scaffold training and safety, and masonry tools and technology. Students and contractors were broken into small groups and made their way through each tutorial.

Caterpillar sponsored the equipment operation tutorial, and brought along three pieces of equipment to demo for the students. Students got to see a mini excavator, a small reach machine, and a skid steer loader up close. According to Shaver, students were educated on the uses of the respective vehicles on a job site.

The scaffolding tutorial featured two different types of scaffolding, one from Hydro Mobile, which is motorized hydraulic scaffolding. Lynn Ladder Company out of Charlotte, NC, also came to the event. Their setup included frame-type scaffolding with safety rails and ladders.

While the students may have seen these types of scaffolding in their textbooks, this may have been their first chance to see them in person. The scaffolding tutorial’s goal was for students to get a feel for the respective setups and breakdowns along with the safety component. Students got to see firsthand real-life usage of the scaffolds. 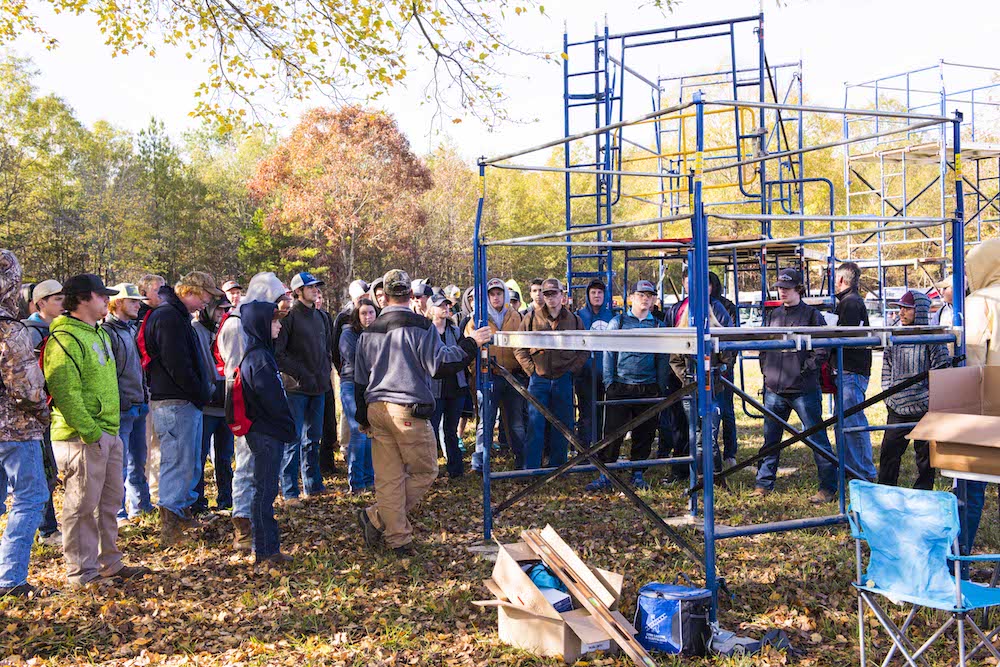 The safety segment was the third section students got to visit. Here fall arrest systems, including lanyards and d-rings, were shown. Additionally, the volunteer demonstrated Personal Protective Equipment (PPE) masonry professionals need while on a job site.

The last tutorial had three components featuring masonry tools and technology. The first demo came from Andy Green of JagClamp, where he demonstrated the uses of the device. Many students had never seen one in person. Power tools were the second aspect of this tutorial. Jonathan “Doc” McGee of McGee Brothers brought a plethora of power tools and equipment. Among the equipment shown off were power-actuated guns and hammer drills, to a name a few. The third portion of this tutorial focused on technology, where a drone was showcased.

The most important thing with events like this is that students are allowed to see the opportunities. According to Shaver, there is an art to seeing— a space between sight and words. The hands-on tutorials that Shaver organized were meant to bring awareness and fresh perspectives to all parties involved, but particularly the students.

This event was first envisioned by Shaver a year ago as he thought it would be perfect for the students of North Carolina. During last year’s event, 171 students were in attendance.

“I ran three tutorials like I’m doing [in 2017], but now we added The Fastest Trowel On The Block competition,” Shaver explained.

The Fastest Towel on the Block Competition was hosted by the MCAA. This competition allowed students to witness working masons competing for cash prizes. There were nine contestants from North Carolina, South Carolina, and Virginia. The winner was Kelton McGee with McGee Brothers. Combined with the field demonstrations, the competition made the students even more excited about masonry.

“Working at the schools and seeing the disconnect between the industry and the school, this is a way I’m bridging that skills gap. That’s the only way we are going to be able to build our industry and keep it thriving and growing,” Shaver explains.

The vast increase in student participants from this year from the previous, strikes the question: How did you get all these students to register? Ryan reached out to the state’s Career Technical Education (CTE) Directors, who represent each county in North Carolina. The directors were instrumental in reaching out to the students in the respective counties. Each Director helped Shaver get in touch with Career Development Coordinators (CDCs); these coordinators have the job of providing information on different career opportunities and pathways in each specific high school.

Shaver then contacted high school instructors to bridge the gap between Directors and classrooms. He also sent out an email blast to everyone in the district – both students and faculty members – that invited and encouraged attendance and participation at the event. This resulted in over 600 attendees, with 419 of those being students. Of those in attendance, one included a representative from the office of Congressman Richard Hudson, who represents North Carolina’s 8th Congressional District.

Byard Stevens, Executive Director of the Southeast Concrete Masonry Association, proved to be instrumental in getting the respective companies involved with the event.

“Concrete block suppliers and mason contractors did everything they could to support the event,” Stevens said. “We had two very active people from Adams Products working on getting sponsors and other companies out there. These other companies included Ox Tools, Craft Tools, Southeastern Concrete Products with Johnson and Adams, Fay Block, and Chandler. Members of the Southeastern Concrete Masonry Association were also in attendance.” 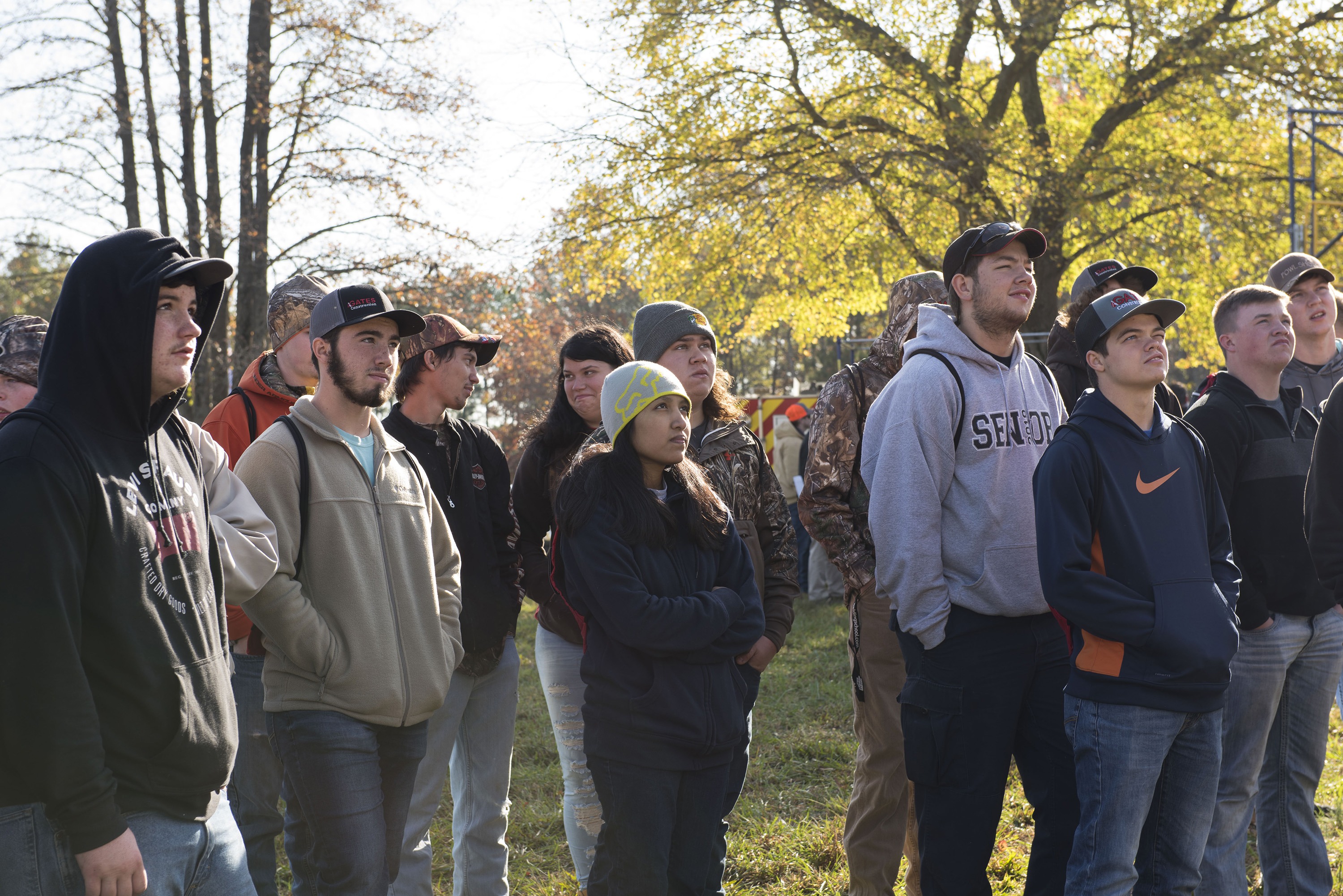 Robb Jolly, Managing Partner of Revision Strategy+Design, also weighed in on the influence of the event. “This whole idea of workforce development extends deep into the basic operations of companies within the industry. There’s work inside as well as outside within this industry and masonry and aggregate companies.” The focus of this event may have been education, but students also got a chance to see other sides of the industry. They got information on both administrative and field work, which should widen their view on the opportunities within the industry.

Ryan Shaver concludes, “The goal of Masonry Education Day was to expose the students to various careers that they could be in, and to expose them to things they can’t see at school.” Though the first year’s numbers alone were impressive, 2017’s numbers were a smashing success. The bond across all aspects of the industry made this memorable for all involved.