In our seventh GEN NXT interview and our first for 2018, we had the opportunity to speak with Joseph Blanton, an apprentice with WASCO, Inc. out of Nashville, Tennessee. In 2017, Joseph competed in his first Masonry Skills Challenge at the World of Concrete. He won in his division, and at the time of writing, is set to compete in the Masonry Skills Challenge at the second-year level. Joseph is the youngest person we’ve ever had the opportunity to interview for this series, and truly represents the next generation of the workforce.

Masonry Magazine: In 2017, you won first place out of all the First-Year contestants in the Skills Competition. How did it feel to win?

Joseph Blanton: I was excited. When they called second place, I said ‘there’s no way that’s me for first,’ and when they did I was kind of drawing a blank. I couldn’t believe it. It was just a really exciting experience. Very thankful that I had the opportunity to go out there through WASCO and do it.

MM: Can you tell me a little bit about how you got started in the industry?

JB: I actually had vocational [education] in high school, which offered masonry. I started out my sophomore year, with my instructor Dustin Love. He [does] side work outside of school, so I would help him in the evenings to earn money to pay for things. Then he got me started at the company I’m currently at, WASCO, Inc.

MM: Can you talk a little bit more about the instructors that you’ve had and your education in masonry?

JB: Dustin Love was a former foreman for WASCO, and knew the Vice President, Shawn Gallant. He set me up with an interview, and I came down here on a rainy day when he wasn’t working. Shawn already had everything set up for me, and I was ready to start work. In high school, I competed in SkillsUSA at the state and national level. Shawn actually came to watch me compete in Chattanooga, TN. in the state competition.

MM: What drew you to be involved in the industry?

JB: I started getting a drive for it. Dustin was always a go-getter. He’s a really good mason. He made everything look so easy, so I thought it would be easy. When I started trying to do it, that’s when I realized it was harder than it looked. I just had to buckle down in it. I tried to learn what I could, take what I could. He’s one of the best I’ve ever worked with. He just kind of took me under his wing and started letting me lay block and brick on his side jobs.

MM: This is your second Skills Competition. Can you tell me how you prepared for this second go-around?

JB: We go to the masonry shop, which is located at Sequatchie Concrete [Service, Inc.], every Tuesday and some Thursdays from 4 to 8 in the evenings with the apprenticeship. The whole time I’m there, I just practice. I’m actually building third-year projects right now to make it easier for the second year. I’ve built a bunch of second-year projects. I build one then I tear it down, I build another one, and tear it down. I strive for perfection every time I build one, and try to make it look neat. I also have to get it done in the three hours they’ve allowed me, and then I judge it the exact way that the competition judges do; using a step-gauge, all the plumb points, level points, range, and measurements.

MM: Is that different from how you prepared for the first-year competitions? Were you building second-year projects?

JB: I kind of got a feel for the first-year projects in high school. I built projects like that in high school. The biggest part of a competition is making sure that you don’t mess up in your design. The biggest part of it for me was learning how to read the blueprints and the design. When I got that down with my first-year projects, it started making everything else a little bit easier. I’ve built a bunch of first-year projects in high school. [Dustin] would pull projects from the MCAA and I would build them. I would build the same one twice, build a different one twice. Just the things that you’ve seen in the competition in terms of what projects have been done before. I’ve built several, and just started striving for the best I could do with it.

MM: What kind of projects have you been working on so far?

JB: I worked at the Tennessee School for the Deaf. They started me out laying block there. Actually, it was the superintendent on the job that said he was impressed with my ability. I was there pretty much start to finish on the job. It was a little over a year. Sometimes things were tough, but you just have to push through and overcome your obstacles.

MM: What challenges have you faced so far within the masonry industry?

JB: As far as challenges, out in the field some of the older masons look at it like I’m trying to take their job. At the end of the day, when they see that masonry isn’t necessarily what people are flocking to do. They see that the trade will continue, and they see the younger generation. He sees that the trade he loves is not going to die. There is potential coming through from the younger people in the industry.

MM: Where do you see yourself going within the industry once you complete your apprenticeship?

JB: Actually, I got to run one small restoration job [for WASCO]. I had three guys working for me. I got it done in a timely manner and made the company money. I feel like they just see potential in me as far as my ability to accomplish things I set my mind to. So, hopefully one day they’ll make me a foreman. 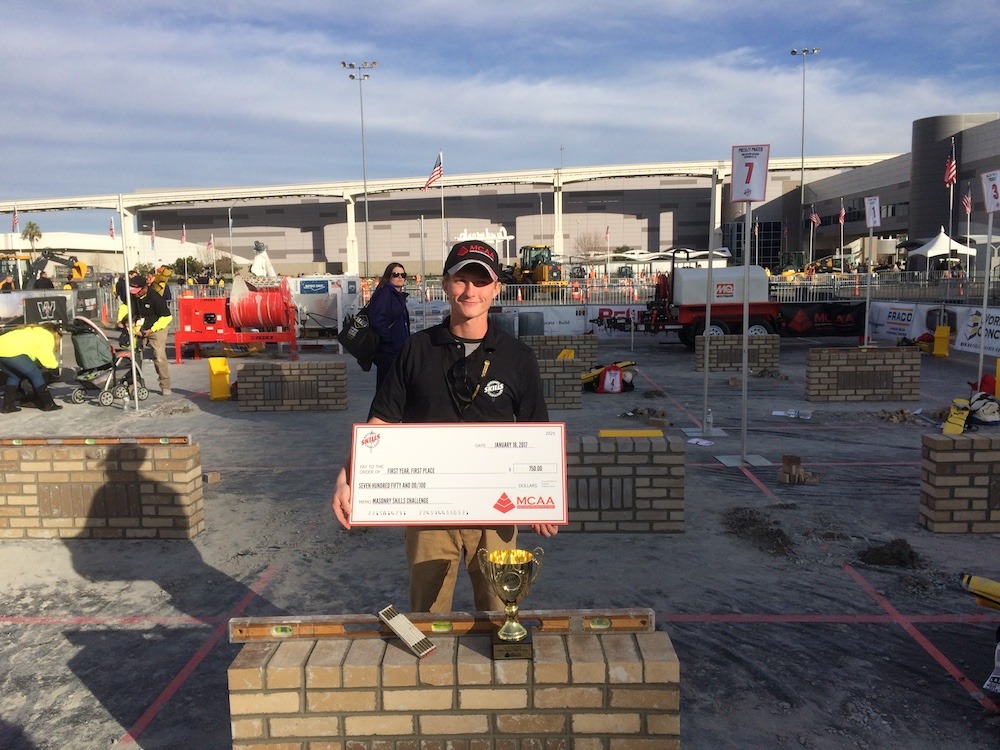 MM: What has been your proudest moment so far within the industry?

JB: When I went to State in high school, I was pretty proud. I had gone to compete my Junior year. I placed fourth. The taste of defeat just didn’t sit well with me. I had to go back to the drawing board. I had to start working harder.

After school and practice, I would come in on Saturdays and actually build my six-hour national project to get ready for next year’s state competition. I would stay almost all day long, trying to compete. My instructor would set a timer on his computer, and I was there for six hours. I had to get it done.

My proudest moment would probably be after that when I had never won a national competition. Even though the competitions were similar, one being state and one being national, winning that one was my proudest moment. My dad had always pushed me to try to go to college. I kind of strayed away from that, and got into the masonry industry. I took my dad to Vegas with me to see me compete and win.

MM: After you won, did that change your parents’ mind about the masonry industry?

JB: I mean, it changed their mind entirely. When they saw how good the company WASCO was in terms of treating their employees with dignity and respect, which is the way anybody should be treated. They took good care of me as far as keeping me busy with the work and the benefits and the pay. There was really not much more you could ask for, and they just finally agreed with me. As long as I was doing something I was good at and loved, I should stick to it.

MM: What’s going to keep you interested in the industry?

JB: Without the Lord I couldn’t do any of this. I just have a love and a passion for it. I do my own side work outside of WASCO. When people call me at random times– I never know when I’m going to get a call or a Facebook message that somebody’s going to want something done. That just keeps me wanting to learn more and do more. I just want to keep getting things under my belt. I’m still inexperienced with a lot of things in the masonry field.

MM: What advice do you have for other people just getting started within the industry? For anyone in high school that’s interested in the masonry industry?

JB: Absolutely. The biggest thing that I’ve faced in high school was not knowing if I wanted to go to college or if I wanted to pick up and go into the masonry industry. What really pushed me forward was when I learned that I didn’t have to be tied down in a confined space. I could build and work in the sunshine and be outside. I’ve always been an outdoorsman. I would always rather be outside, but you just have to really dig deep. When you think that you don’t want to do something you have to push yourself to see what you can really accomplish. If you give up, you’ll never really be able to accomplish.

I would always set a goal. Whenever I was building my projects, I would aim to get it done in three hours. When I got my quality down, my speed came later. That enabled everything to be easier. I had an assurance then that I was selling a quality product to the customer. The biggest thing would probably be the people that tell you college education is for everybody, when it really isn’t. The backbone of this country is the people in the factories and in the industry. There’s always going to be something to build and do. It’s finding the people to do it that’s the struggle.

Employee Retention
Communicating Across Generations From An...
CMU Checkoff Will Create New...
Seismic Resilience of Masonry
The Simple Things: Keep Your...
GEN NXT: Oscar Montaño
The Interesting Story Behind MARSHALLTOWN
ASTM C1670: Seeing a Standard...
Owens Corning And What To...
3 Decades of Masonry Estimating
Managing Growing Teams
Contractor Tip Of The Month:...
Business Building: Leaders Change To...
On The Level: Some Tools...
Building More: Is It Really...
Chairman’s Message: What You Can...
Remember That First Day You...
OUR STORY IS ONE OF...
Case Study: 547 West 47th...
An Inside Look at Hobbs...
MCAA Safety Talks and Their...
MORTAR BOARDS VS. OSB
Dust Management
Designing for Outdoor Dining
Social Media Marketing And Targeting
The Fechino Files: National Masonry...
ICPI-NCMA: A New Era as...
William Howard Taft Freshman Academy
Raising The Line
Top 3 Cleaning Equipment Mistakes...