From Railroad Tracks to Saw Blades

Wood rails in Europe in the mid-1500s served as “wagonways” for horse-drawn carts to move easier than on dirt roads. A couple centuries later, iron was used for both the rails and wheels, and the term became “tramways”. Of course, the steam engine changed everything. Between American Colonel John Stevens and British inventor George Stephenson, the early steam locomotives were developed. Once the idea of the railroad was embraced in the U.S. and hundreds and thousands of miles of track were being laid, concerns were evident on two fronts: the fervent consumption of iron and the downside of iron’s brittleness and cumbersome production.

Enter Henry Bessemer. In the same year that borax was discovered and the first railroad bridge was constructed across the Mississippi River, Bessemer developed an effective way to use oxygen to reduce the carbon content in iron. It was 1856. Postage stamps were five cents, and the modern steel industry was born. The Bessemer Process was fast and inexpensive with a few more wrinkles to iron out, but steel provided a higher quality material than available to date, and late 19th century businessmen like Andrew Carnegie and Charles Schwab recognized the value of investing in this new industry, making millions of dollars. The Age of Steel ushered in not only more durable and less expensive railroad tracks, but also a wonderful material for machine parts and tools, including saw blades.

Today’s masonry saw blades have evolved into efficient, slender, spinning, grinding and cutting tools with diamond, fiberglass, carbide, titanium, tungsten and other components to facilitate the cutting process. Due to hardness, diamond blades are very popular among masons for their superior cutting capability on all materials. Diamonds form from carbon in the earth’s mantle some 87 to 118 miles below the surface where high temperature and pressure are present. Volcanoes force diamonds closer to the surface, though there are now many synthetic versions which mimic the superior hardness and unrivaled beauty when cut and polished. 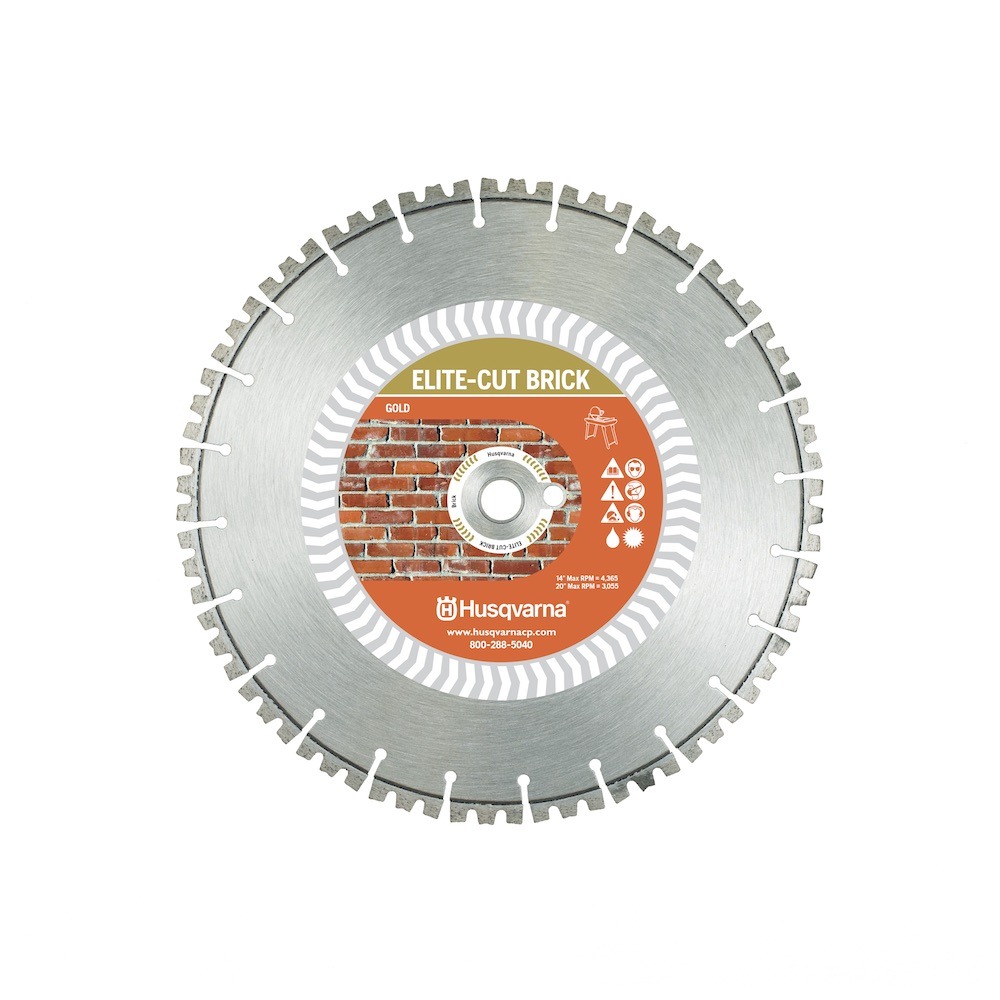 Diamonds have probably been used as engraving tools since cave dwelling days and are valued for their extreme hardness and thermal conductivity. That value is reflected in the prices of both diamond jewelry and diamond saw blades. The core of the blade is steel with diamond crystals at the rims in a blend with metal powder. During cutting, the diamond matrix actually wears down revealing more diamond crystals and more cutting power.

The diamond saw blade was invented by Richard Felker, who noted that metal blades were somewhat ineffective for cutting tile and stone. He was a chemist and pharmacist during World War II who had created blades to cut quartz frequency crystals for radios and walkie-talkies used in the war effort. He integrated diamond bits at the edge surfaces of a blade, so the exposed diamond would do the cutting.

Saw blades for the masonry industry come with distinctive edges. Some are continuous and look and perform more like a skinny grinder than a saw blade, which is usually thought of as having a toothed rim. Others are segmented evenly all the way around, and the turbo blade may or may not have teeth. These each have different cutting properties. The segments or rim are securely affixed to the steel inner core of the blade by laser welding, brazing or sintering.

An entrepreneur at heart, Robert Bosch opened his company in Germany in 1886, naming it “Workshop for Precision Mechanics and Electrical Engineering.” It sounds like it belongs at some institution of higher learning, but Bosch was fiercely independent and determined to be self-employed on the heels of his apprentice and journeyman years. Today, his company offers a range of concrete cutting and grinding accessories that include universal rough cut segmented rim, hard material segmented rim, soft material segmented rim, smooth cut turbo rim and clean cut continuous rim blades. “Bosch relies on the highest-quality diamonds available to produce its exclusive, optimized formulas,” says Matt Van, Channel/Product Marketing Manager, Robert Bosch Tool Corporation, Accessories. ” For efficient cutting in concrete and other hard materials on some blades, Bosch has developed a tensioned blade core that augments the high-quality diamond formulation. The tensioned steel core is engineered with an innovative process that ensures each blade delivers smooth cuts with low vibration to reduce blade wobble.”

Any blade wobble is a danger to the equipment and the mason. The first check point in this scenario is to install a new blade and see if it runs smoothly. If it does, then the old blade is bent or defective. If the new one wobbles as well, check the rest of the saw per manufacturer’s instructions. Be sure to follow manufacturer’s safety directions for blades, guards, eye protection, care and operation of every saw. 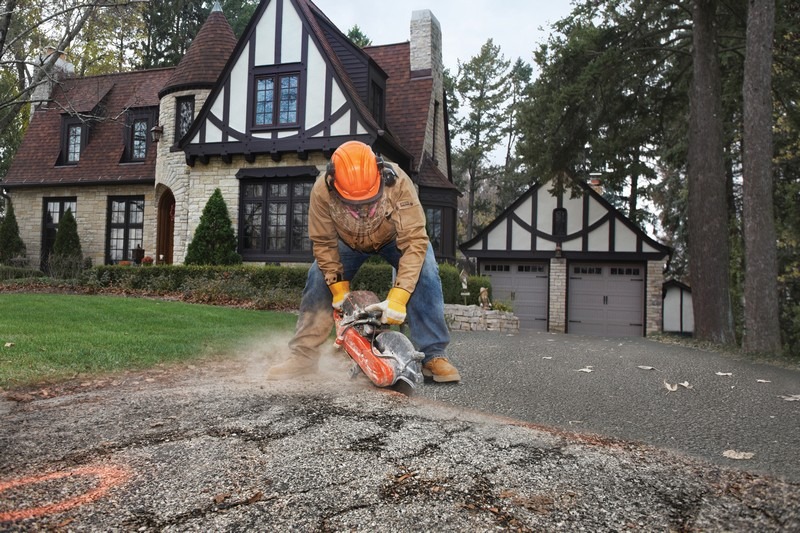 Famous for its wood saws, Skilsaw, founded in 1924, released its first worm drive concrete saw in late 2016. The MEDUSAWTM 7 in. Worm Drive for Concrete delivers a complete concrete cutting system with legendary SKILSAW worm drive power and durability. The company name, by the way, came from one of the founder’s wives, Mrs. J.W. Sullivan, overhearing the conversation about issues like ripping, mitering and beveling with the saw and commented: “Whoever could do that must have a lot of skill; it takes a lot of skill to do that.” Another online source at www.asktooltalk.com notes that according to “Women, Technology and Innovation” (Joan Rothschild, editor, Pergamon Press, 1982), the invention of the circular saw blade is attributed to a Shaker inventor, Sarah Babbit, of Massachusetts. Apparently in 1810 she made and attached a notched tin disk to the spindle of her spinning wheel and successfully cut a piece of shingle. Out of this crude beginning developed circular saws and blades.

There are lots of choices for saw blades in many prices, and like with any job, using the right tool for the right cut is imperative. According to Van, Bosch offers a wide range of saw blade options:

Mangialardi expands on the quality of Skilsaw products: “As the inventor of the portable circular saw, SKILSAW has a long standing history of delivering saws with power and quality. SKILSAW conducts extensive research, including working with professionals across the country to deliver quality tools that contribute to a more efficient and effective jobsite. SKILSAW also offers a money-back STAY TRUE® Guarantee. If users aren’t fully satisfied with their purchase, they have 180 days to return the SKILSAW to where they bought it for a full refund.”

In some of the Bosch blades, each segment is laser welded to the steel core. “This is a premium connection method that offers the blade high mechanical strength and rigidity, ensuring greater stability during the cut,” explains Van. “The company brings rigorous testing, both in laboratories and in the field, to its new product introductions. In addition to hands-on customer research, Bosch is the acknowledged leader in tools and accessories built specifically for the concrete market.” 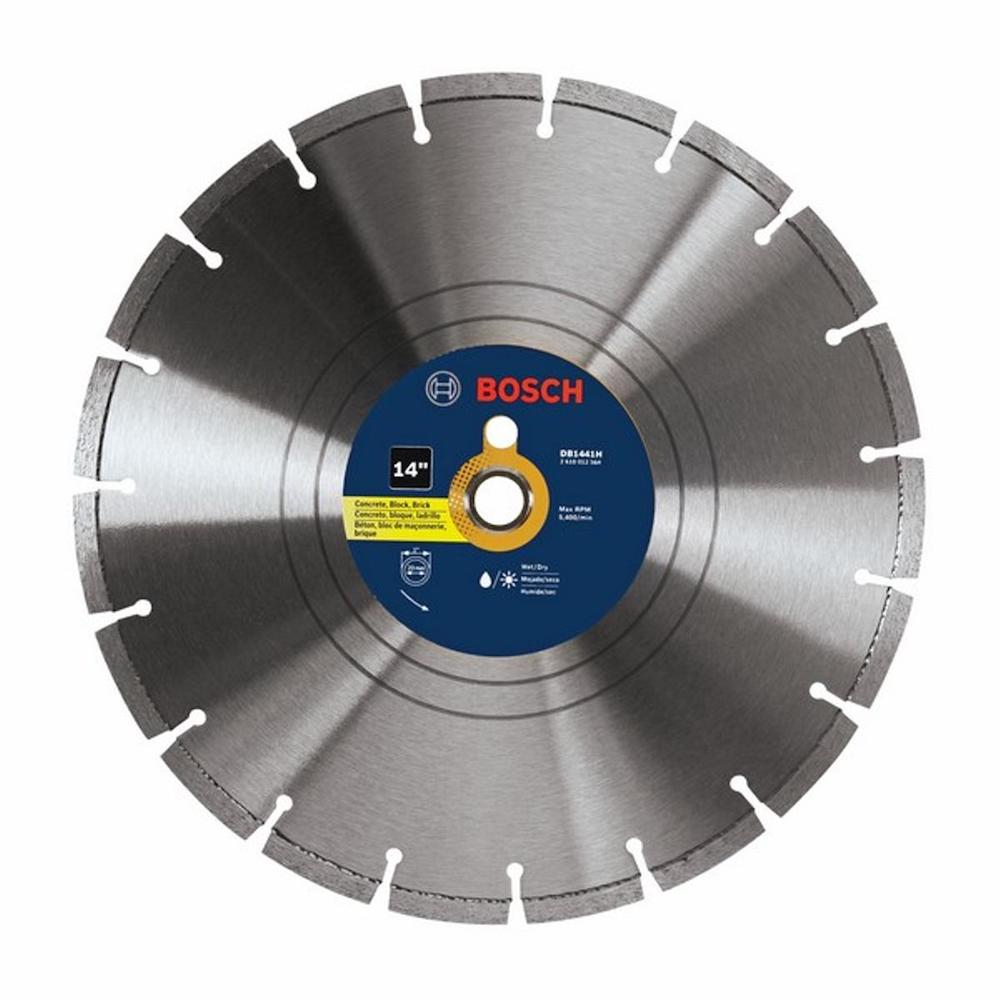 A saw blade choice will also depend on whether the job is wet cutting or dry cutting. Dry cutting saw blades have segment welds which do not get hot and do not need water to cool while being used. Wet cutting blades work well with super cured concrete where the water cooling factor calls for deep cutting. Though not advisable, you can use a saw blade for dry cutting with water, but masons should never employ a wet cutting blade in dry conditions, as the segments and the blade may deteriorate and warp.

Care is factor in the life of any tool or saw blade. Mason contractors should change the blade when the cutting performance is unacceptable and if the blade gets damaged. “Users should inspect their blade at the beginning of the work day, looking for abrasions or marring that could affect blade performance,” Van relates. “It could be helpful to redress a blade that’s slowing down or has abrasions. This involves running the blade through an abrasive material, like a scrap piece of concrete block or similar.”

As with all tools in the mason’s toolbox, there’s a wide range of prices which often directly relate to quality and longevity. Also, analyze the job. If a particular application is a short, one-time task, one of the economy saw blades could work fine. For extended work on precision products, spring for the best you can afford, then a little bit more. “Blade life is dependent on a variety of factors, including the material being cut, the power tool used, the operator, depth of cut and other conditions,” Van explains. And Resendez concurs: “Life of a saw blade is a difficult factor to quantify considering several variables such as material, machine, operator, amount of water, etc. All these factors affect the longevity of a blade.”

From the 64-story U.S. Steel Building in Pittsburgh, aircraft, railroads, submarines, bridges, munitions, pipelines and highways to the humble saw blade, steel is one of the most widely used metals in the modern world. And it has a sustainability component. According to the American Iron and Steel Institute: “Steel is the most recycled material on the planet, more than all other metals combined. Steel retains an extremely high overall recycling rate, which in 2012, stood at 88 percent. The amazing metallurgical properties of steel allow it to be recycled continually with no degradation in performance, and from one product to another.

Joanne M. Anderson is a freelance writer and frequent contributor to Masonry Magazine who writes from her small horse farm outside Blacksburg, Va.