From one of our nation’s most prestigious places of worship, we head to the original home of the bourbon industry in Louisville, Kentucky. In our second feature of our American Treasures series, we got the opportunity to tour and explore the revitalization efforts that are going on in this historic block from 101-133 W. Main St.

Built between 1852 and 1905, these buildings were constructed as part of the bourbon boom. The impressive buildings were comprised primarily of masonry, with wood joists for support. On the façade of the buildings, ornate cast-iron and terracotta don the window and door arches. With no HVAC or running water, the original versions of the buildings only housed masonry coal heaters to char the barrels for proper bourbon making. Once completed, barrels of bourbon would be rolled down the adjacent North 1st street to the river where they’d be shipped via steamboat.

In addition to bourbon production, the block of buildings also housed storage, sales, and distribution centers. According to the Explore KY History website, whiskey producers such as John T. Barbee and Company, Brown-Forman Company, Greenbrier Distillery Company, and Old Kentucky Distillery all had Main Street locations. As technology advanced, distribution didn’t have to center around the nearby Ohio River, the distillery-related businesses left. 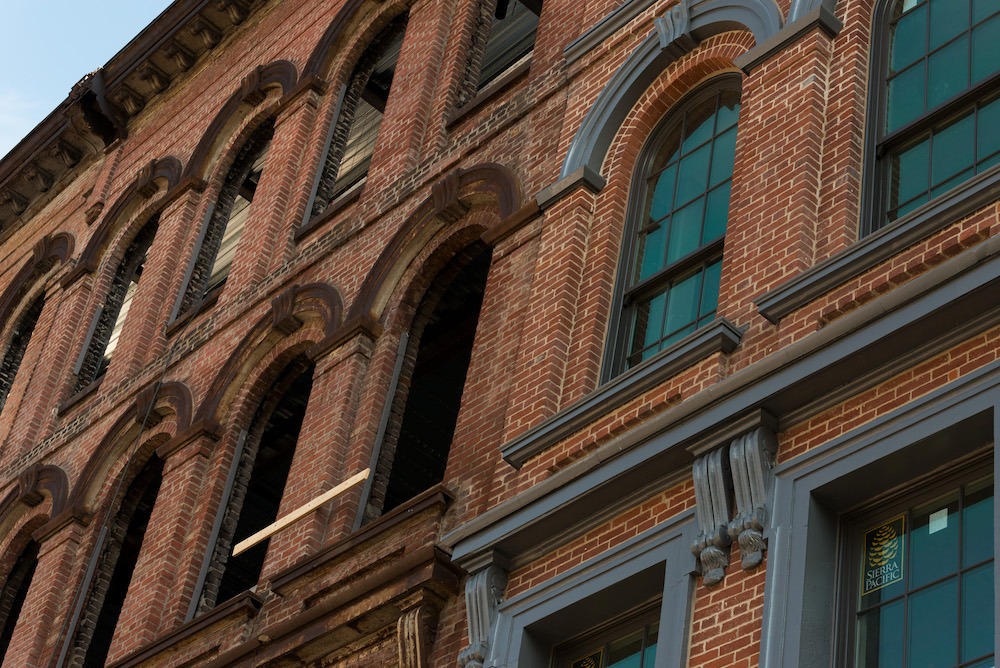 For approximately 20 years, the buildings sat dormant. Skylights were shattered over the years and rainwater poured into the buildings, which deteriorated the brick, sheet metal and cast-iron that made up the buildings. Eventually, the buildings were placed on Louisville’s Most Endangered Historic Places list and nearly destroyed in 2011. However, the City of Louisville hatched a plan with developers and preservationists to restore the block to its former glory.

Developer Valle Jones and her team began work on 111, 113, and 115 W. Main St. in 2012, utilizing a national tax credit in order to help complete the scope of work. However, this meant that the restoration work had to adhere to a set of standards set forth by the U.S. National Park Service. That meant the doors and details of the building had to look as they did when they were originally constructed.

Immediate work was done to stabilize the structures. SGH Masonry Design paved the parking lot behind the 15-story facades of two original buildings. Sills were rebuilt to look like they did originally. Any green portions on 113’s façade are cast iron, yellow pieces are terra cotta, and the rest is made up of white glazed brick. 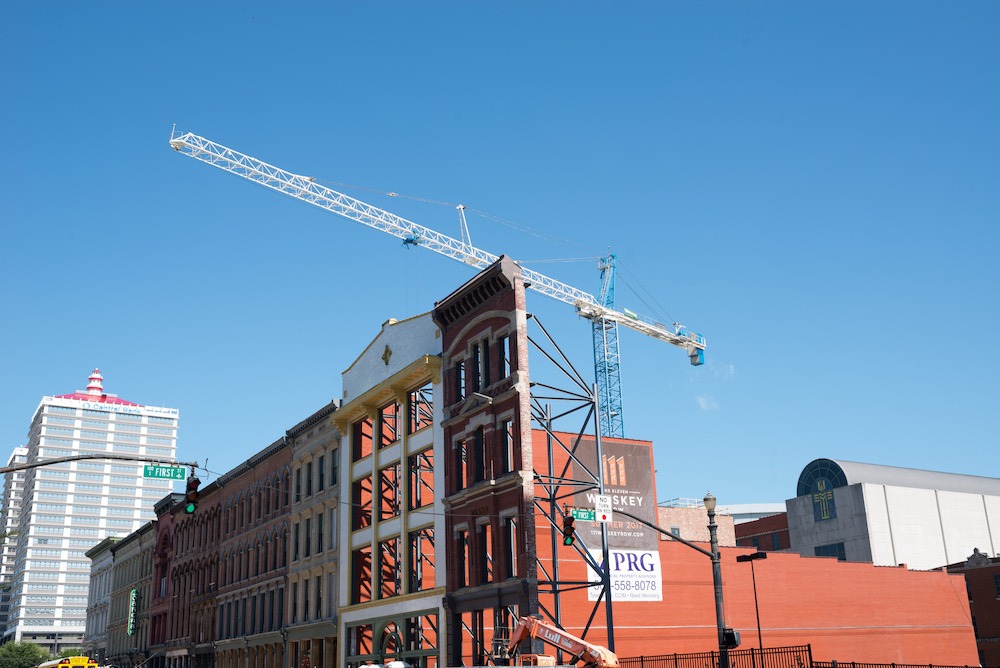 Over the years, the limestone had built up a significant amount of dirt, so cleaning crews were brought in to do their best at removing all the buildup. On buildings 111 and 113, painted tuckpoints were removed in order to adhere to the standards of the U.S. National Park Service. Buildings 115 and 117, where the bourbon distillery used to be, were temporarily tuckpointed.

On the interior of the full buildings, solid masonry walls had clearly stood the test of time. Interestingly, original staircase and wall locations were still visible in the patterns on the brick. The design plan called for this project to be a multi-use project, and the entire documenting and bidding phases were completed.

In July of 2015, however, all of the work came to a standstill. A three-alarm fire burned through the basement up, and W. Main St. wound up being closed for eight days. Immediately, work was done to stabilize the buildings and try to salvage what they could. Obviously, the 18-inch solid masonry walls were undamaged themselves, but the wooden joists and floors were destroyed. Because of this, the buildings experienced a few collapses in the floors and walls. Buildings 111, 113, and 115 experienced damage while 117 and 119, outside of the NPS restoration project, remained undamaged. No one was injured despite construction crews having been there just shortly before the blaze.

Immediately, work began to stabilize the buildings and survey the damage. Within two weeks, all the buildings were braced and stabilized. Angled beams were placed in and around the structure to ensure that there would be no further collapses. After that, crews worked to remove leftover debris from inside the building. All the internals from Main St. down two floors had to be repaired and replaced. The third floor walls also had to be rebuilt. The masonry lasted even though the other materials didn’t. Essentially, developers were faced with a gutted shell of a building and had to regroup. 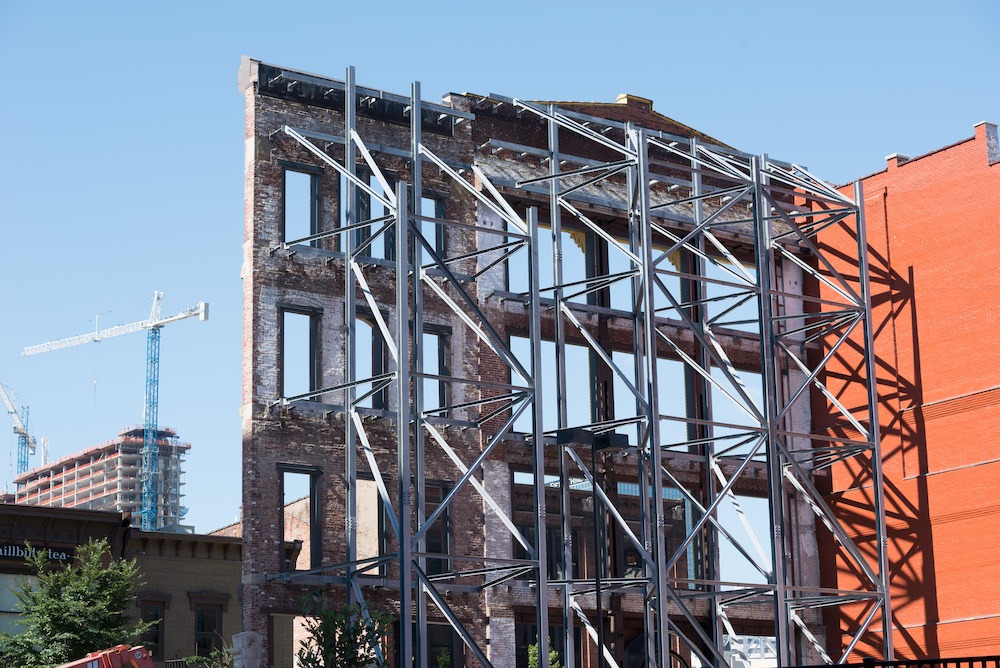 Whiskey Row After The Fire

Obviously, the impact of the fire forced plans to be re-evaluated. According to Ron Carmicle, our tour guide and construction manager of the McCall Group, developers and owners didn’t even know if there was a future for the project.

“We just had no idea if we were going to start from scratch or scrap the whole thing,” he said while giving us a look inside. Luckily for the community, the team pulled themselves back up from the ashes and began work plotting the course ahead. Over 140,000 bricks from the fire were saved and re-set, and the project entered a new phase.

Originally intended as a multi-use concept, the building went back to the drawing board a bit. Instead of multiple venues taking up the ground floor, Duluth Trading Company signed on as an anchor tenant. The space would not only be quite large, it would be their first in a more metropolitan environment. The retailer leased 15,000 square feet of space on the main floor of 111 W. Main St. Significantly, this marked the first retailer in Whiskey Row. 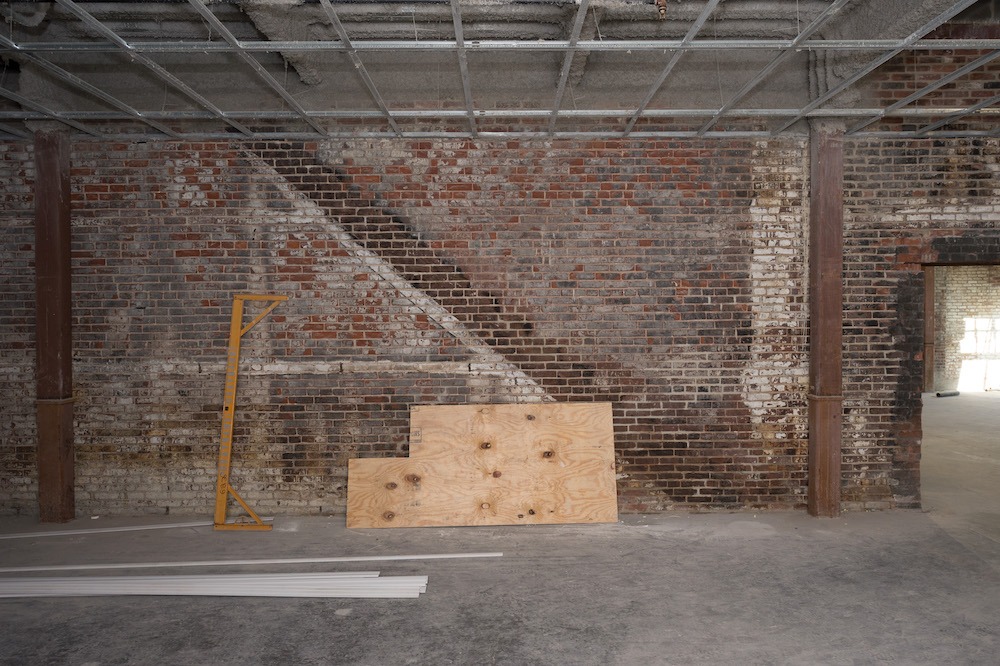 In Duluth’s space, new arches were put in in order to meet code. Below Duluth, a traditional speakeasy, aptly called the Speakeasy Bar, will open to the public. Just above Duluth, two tenants will occupy office space. Because there were not windows in the original walls of the building, skylights were installed to allow in natural light. 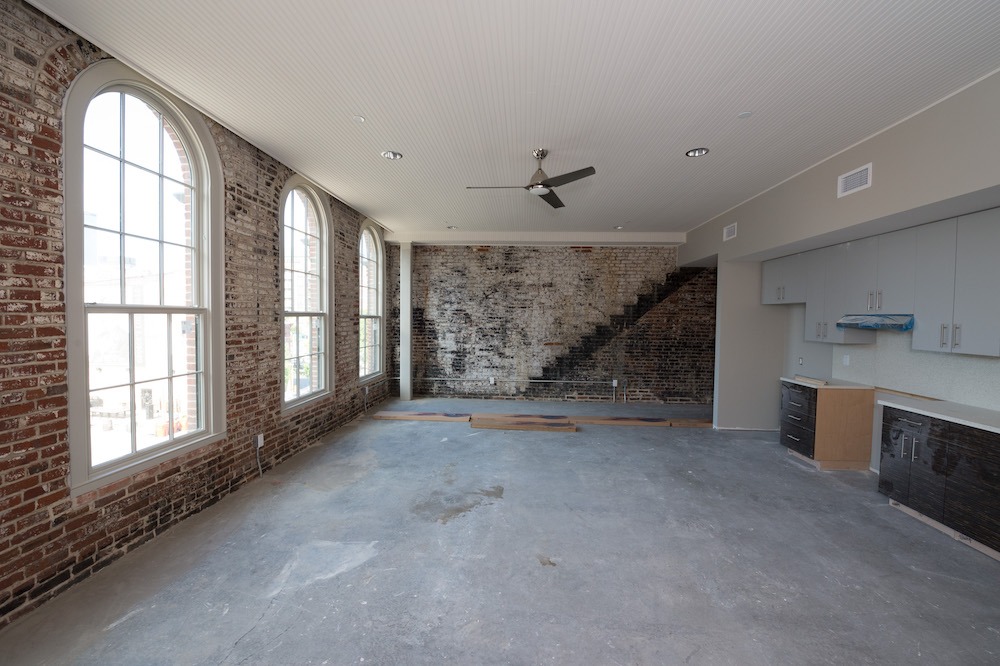 Above the office space, two levels of the building are designated for residential use, with apartments ranging from 600 to 1,500 square feet in space. During our tour, it was clear that these apartments were something special. Each unit, depending on its placement, could have unique features to the brick, such as original stairwell markings or colorations.

Whiskey Row is clearly one of America’s Treasures, and after years of being dormant and abandoned, new life has been breathed into the area. Despite a devastating fire that left developers and construction teams wondering whether they were looking at a demolition or revitalization.

Thankfully for the country and local community, the durability of the masonry and ability to salvage large parts of the project seemed to be what pushed the project forward. Whiskey Row is a sight to behold, and knowing the story behind its revitalization makes it worth visiting. For many reasons, one of them being the fact that it was the home of bourbon for a period, this is an American Treasure.