What a whirlwind of an adventure. January 19, 2017, there we where honoring some of the greatest men in our industry the Closing Banquet in Las Vegas with the Masonry Hall of Fame installation dinner. It was also the ending of an extremely busy week in Las Vegas with the World of Concrete/Masonry. That evening at 8:30 pm myself and six other MCAA folks caught the red-eye out of McCarran International for Baltimore, MD for the inauguration of the 45th President.

Interesting little history on inaugurations. There are more inaugurations than Presidents as we have had many President’s serve more than one term. Here we were heading to DC to witness a Presidential inauguration something no one in our group had done before. We arrived in Baltimore around 6:30 am ET. We had very little sleep on the plane and we were operating on adrenalin for the most of the day. It was an exciting time for us. Traveling with me were MCAA Immediate Past Chairman Mark Kemp (also current Masonry Foundation Chair), Current MCAA Chairman Mike Sutter and Vice Chairman Paul Odom. They were accompanied by their wives. Our first challenge was getting from Baltimore to our hotel to make a quick change. We made it in record time. From there our driver had to navigate the streets of DC to get us to 101 Constitution Avenue or as close as he could get without going into the red-zone of closed streets. We were let off about a half mile from our destination and the crowds were pretty full. We ventured off with our google maps guiding us. 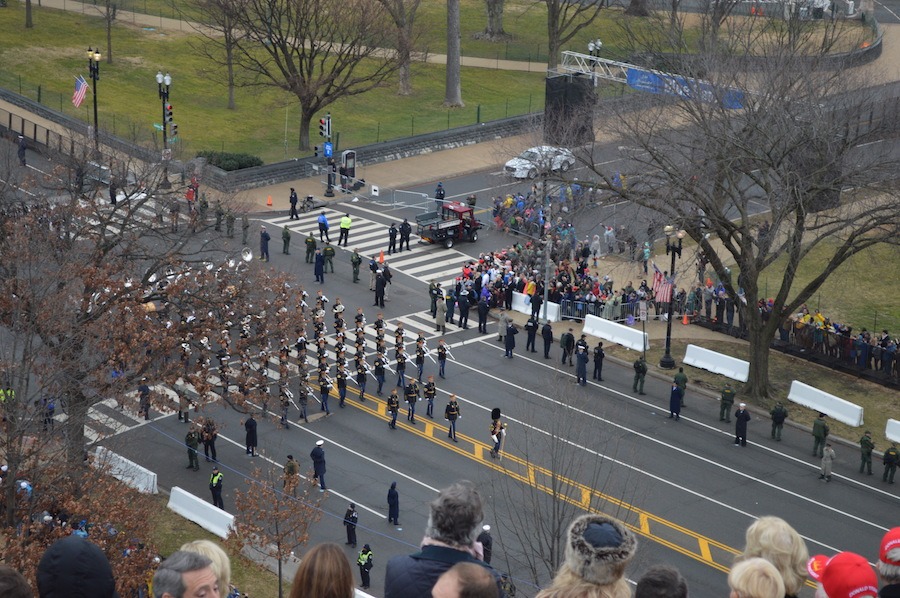 Sadly, the maps app did not account for the protesters we ran into at one point. The protesters were on the corner we needed to get through to get to our destination. Fortunately, I am not a small person and for those who don’t know, Mark Kemp is well versed in the martial arts, so we had a pretty good group to break through the protesters, which sadly is what we had to do. The protesters we encountered were a noisy bunch and had yellow caution tape rolled out and were trying to prevent access to security check points. Mark and I lead our group and we held the yellow tape up to let our group under much to the dismay of the protestors who grew more irritated with us by the moment. A nice little shove and push back seemed to keep them at bay while our group made our way. Turns out we over shot our entrance and we had to circle the block and make a second attempt. We were better prepared the second time around and had a great strategy to get through fortunately for us, the police had moved the protester mob out of our access point. 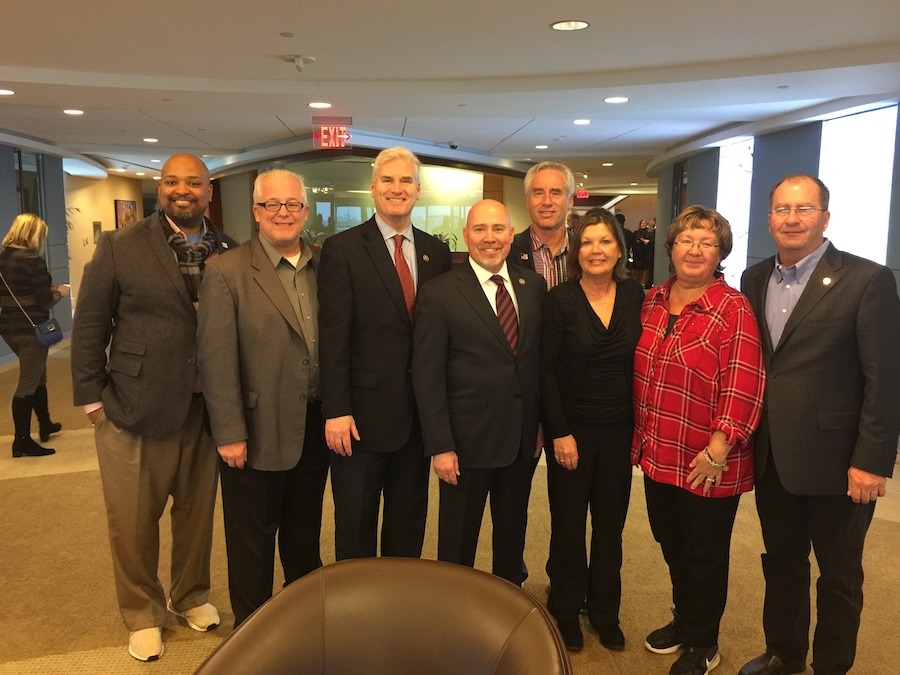 When we arrived we learned that we were being hosted at the Carpenters Union building. The Carpenters Union shares the same lobbying group as the MCAA, the Keelen Group, thus our connection. The office space was very nice and we appreciated the hospitality extended to our group. They were very gracious and we appreciated the fact that we had an indoor environment while also having an outdoor patio experience as well. We were located just below the CNN reporting booth and had an opportunity to harass the folks broadcasting and got a nice shot of Anderson Cooper waving hello. We got to hear and be a part of the excitement and truly found the day to be special. After the swearing in, we also got to watch the parade as it departed on the street just below us. In between the swearing in and the parade we had an opportunity to meet with several Congressmen who were present and discuss issues impacting our industry with them. Many have asked if it was worth the journey and that is an easy answer, it certainly was. 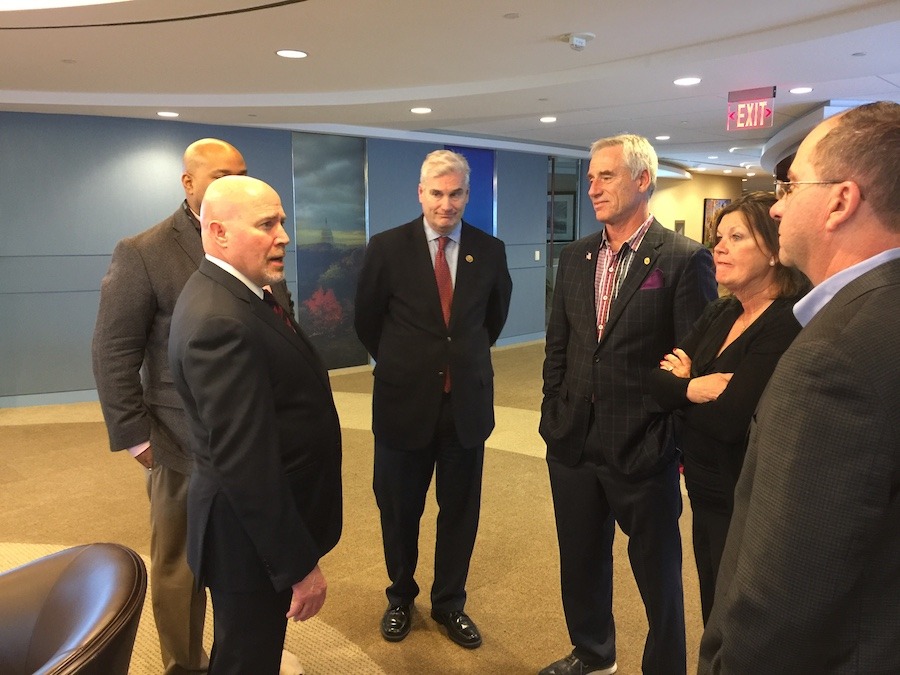 I was fortunate that my family had an opportunity to meet me in DC and take in the inauguration with me and then we got to experience DC that next week. We thoroughly enjoyed ourselves and took in so much of our countries great history through the museums and memorials. The one thing I take away from my experience is that we live in a great country and as a people we can be very strong. We have to be careful not to allow our political differences split us a part as a nation. As a people we have so much more in common than not. This is exhibited throughout DC and our history is great. We can do so much to make our country great and we have throughout our history. I have to say throughout my life no matter who was in control of the White House or Congress I have always hoped the best for them, because it is really the best for us all as a country. We have a mighty big mountain to climb and we will need everyone pulling in the same direction to be successful but I am hopeful in the very near future that this will begin to happen. Having people plotting for failure of a party or individual will not help anyone, only pull us down. I truly am excited about our future and what is ahead. We will get through this as we have every other issue we have faced in the past. In the end we should come out stronger and wiser.

“After spending a week in Las Vegas at the World of Concrete, I was almost wishing Paul and I had not accepted the invitation to join our friends in DC for the inauguration. I was tired and ready to get back to the office to catch up on work. However, as we landed at Reagan International after an overnight flight, my thoughts changed. The feeling of landing at our Nation’s Capital was invigorating. As we traveled mass transit to the city, I noticed several families with young children, dressed in suits, ties, and Sunday-best dresses!! I imagined how impressive it was going to be as they grew up remembering the ceremony. And INDEED it was impressive to watch, listen, and feel the emotions of another inauguration. I am proud of our country and proud to be an American!! I am also VERY glad we traveled to DC!! Paul and I thank the Keelan Group for the invitation, the Carpenter’s Union for their hospitality in their beautiful building and Jeff Buczkiewicz for getting the group together. It was a special time. May God Bless America as we enter this new administration.” — Susie Odom

“Mike and I, along with Jeff, Mark, Pauline, Paul and Susie were given an opportunity to attend the Inauguration of President Trump in January. The guys were immediately on board as they said repeatedly “an opportunity of a lifetime.” I have to admit I was a little less enthusiastic initially. However, I couldn’t be more thankful to Matt from The Keelen Group for giving us this experience. The hospitality we were shown while at the Carpenter’s Building gave us a fantastic view of both the swearing in ceremony and parade afterwards. Definitely “an opportunity of a lifetime!”  — Colleen Sutter

“Mark and I were honored to represent MCAA at the Inaugural on January 20, 2017. It was worth the red eye from Vegas to witness this historic event. While it was challenging to get to our destination because of the protestors, once there, we were able to witness history taking place. Witnessing the 45th President Donald Trump being sworn in will go down as one of the more memorable events of my lifetime. Not only has that moment finally changed the course of this great Nation, but it will provide businesses the opportunity to grow and create jobs. Finally, God Bless America again!” — Pauline Kemp