Backed by 100 years of experience and with a little modern ingenuity, Western’s crews were able to restore the 141-year-old archway to its structurally sound, original condition in just a matter of months.

The iconic Eads Bridge was the first steel structure bridge of its kind in the United States when it was designed by James B. Eads and opened on July 4, 1874. A significant engineering feat for its time, the historic bridge was in desperate need of rehabilitation from decades of use, repairs and environmental exposure.

All phases of the project are scheduled to be completed in 2016 and expected to extend the life of the bridge by 50 years. The top deck of the bridge, which supports vehicle and pedestrian travel, is owned by the City of St. Louis. BSDA/Metro owns the superstructure and the lower deck, which is the rail deck that supports the region’s MetroLink light rail system.

The multi-faceted restoration project includes replacing support steel, dating from the 1880s; refinishing and repainting the bridge’s superstructure using a rust-inhibiting coating; upgrading the MetroLink light rail system; and restoring a brick archway under the bridge that supports its foundation. 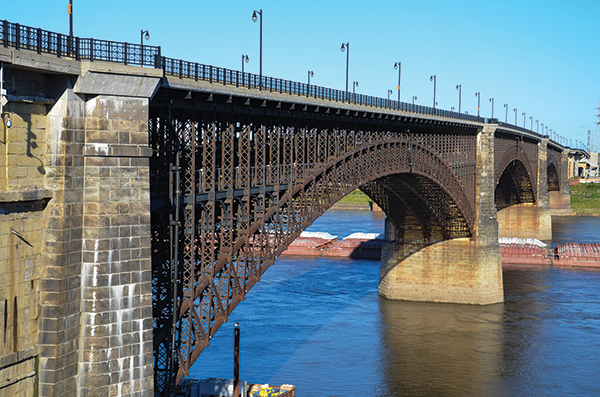 St. Louis Bridge Co., a large bridge construction company working throughout the Midwest, hired Western Specialty Contractors  as a subcontractor on the project, based on Western’s expertise in historical masonry restoration.

Western’s scope of work focused on restoring the bridge’s brick archway support on the Missouri side, which is located about 100 yards from the waterfront and allows roadway and pedestrian traffic under the bridge. Western was contracted to remove, replace and tuckpoint about 1,256 square feet of deteriorating brick and mortar joints within the archway. Decades of concrete patching and weathering had caused the facing of the archway brick to become dislodged with spalling, creating a hazard for falling debris.

Because of the historical significance of the bridge, Western crews were careful to select replacement bricks and mortar that closely matched the original materials used. 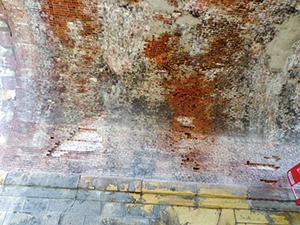 One of the challenges that Western’s crews faced on the project included removing and installing brick in the overhead arch, which reaches 30 feet high at its center. Western found a solution to the vertical challenge by using a 40-foot scissor lift and anchoring wood strips to the arch ceiling that would hold the new brick securely in place during installation. Once the brick cured, Western crews removed the wood strips, and then filled in the holes where necessary.

Since the Mississippi River is only about 200 feet away from the archway, Western crews were challenged with securing electricity and usable water on the site for mixing all of the mortar they needed, plus cleaning the entire archway. The nearest available usable water source was three blocks away. St. Louis Bridge Co. stepped up to the plate by delivering water in containers to the jobsite for Western’s crews to use. Portable generators, which required additional security protection, provided the electricity needed.

The final phase of the project, which involved cleaning the entire archway, began once Western’s crews completed the restoration work. In order to protect the nearby river environment and the historical integrity of the archway, Western crews used water-soluble products applied at a low psi level and collected all of the water runoff.

The resulting restoration provides a safe, supportive and historically accurate archway support for generations to utilize and admire into the future.

Employee Retention
Communicating Across Generations From An...
CMU Checkoff Will Create New...
Seismic Resilience of Masonry
The Simple Things: Keep Your...
GEN NXT: Oscar Montaño
The Interesting Story Behind MARSHALLTOWN
ASTM C1670: Seeing a Standard...
Owens Corning And What To...
3 Decades of Masonry Estimating
Managing Growing Teams
Contractor Tip Of The Month:...
Business Building: Leaders Change To...
On The Level: Some Tools...
Building More: Is It Really...
Chairman’s Message: What You Can...
Remember That First Day You...
OUR STORY IS ONE OF...
Case Study: 547 West 47th...
An Inside Look at Hobbs...
MCAA Safety Talks and Their...
MORTAR BOARDS VS. OSB
Dust Management
Designing for Outdoor Dining
Social Media Marketing And Targeting
The Fechino Files: National Masonry...
ICPI-NCMA: A New Era as...
William Howard Taft Freshman Academy
Raising The Line
Top 3 Cleaning Equipment Mistakes...