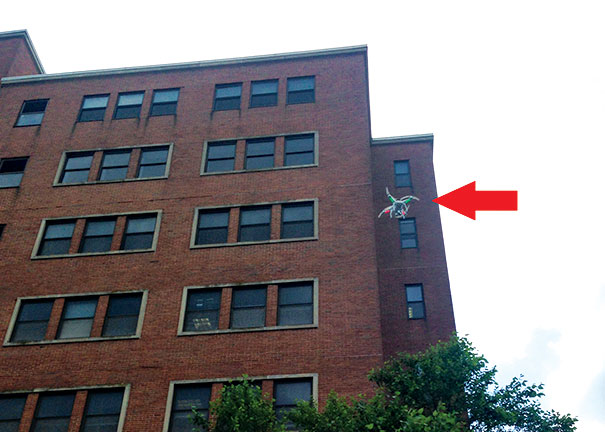 Engineers often are challenged with inspecting tall structures. Engineered Building Inspections, P.C., is a specialty engineering firm that performs façade and waterproofing evaluations in the New York City region. The firm knows the high costs associated with the telescopic man lifts and scaffolding setups required to get a closer look at tall structures. Vincent Boccia, P.E., president of Engineered Building Inspections, recently faced this task, when he looked at an eight-story building that had a deteriorating masonry façade condition. Pieces of mortar had been seen falling at various locations, and the building ownership needed to know the extent of the problem. Boccia thought this was a perfect location to test drone technology.

Using a premium quad-copter drone with a high-definition image stabilizing camera, Boccia was able to capture close-up video imagery of the entire façade. The façade measured 80 feet high X about 730 linear feet all around. The high-definition images were clear and could be carefully examined with pinch and zoom technology.

“Inspections from hanging scaffold rigs limit what can be seen,” Boccia says. “Larger platforms only measure 20 feet in length, which is often a relatively small area of a building. Similarly, an 80-foot telescopic man lift is large and difficult to maneuver around a building site with patios and landscaping. The drone, however, was able to quickly elevate and soar to the highest extremities of the building in a manner of seconds.”

The ability to view these heights from the safety of the ground is a plus. The quad-copter drone was controlled and maneuvered by simply utilizing a smart phone. As a result, the inspector acted as a co-pilot of sorts and directed the pilot to specific locations of the building. Imagery was saved and replicated on a tablet, so that the inspector and drone pilot could see the same screen images of the building at their convenience.

The smartphone and tablet were limited to 560 dpi resolution, so evaluating the high-definition recorded video back in the home office was the best method. Once the video was reviewed by the inspector, video segments could be shared with fellow engineers, building management and ownership.

“In the past, only the inspector on the lift had the luxury of interpreting the structural condition,” says Boccia. “Sure, photography would always be used, but the video imagery from the drone was much easier to share and show the big picture of what was going on.”

In the case of the subject building façade, the locations of façade deficiencies were transferred to elevation drawings that were previously drafted. Restoration costs could then be more accurately determined, based on knowing the full extent of the deteriorated condition. Of course, there must be allowances for this type of restoration; sometimes masonry is insecure but is not visibly displaced. Only a hands-on sounding inspection would uncover such failure.

A few years ago, Engineered Building Inspections was commissioned to evaluate a landmark, a 231-foot Jones Beach water tower structure on Long Island, N.Y. A large portion of the cost to conduct this survey went toward the rental and coordination of a large telescopic boom. The rental required closing a portion of the highway leading up to the tower as the EBI inspector loomed precariously in the air, evaluating the condition of the brickwork.

“Drone technology would have worked just as well in understanding the condition of the Jones Beach water tower brick work at only a fraction of the cost,” says Boccia. “Especially when dealing with a major project and one of public interest, sharing the recorded video would be a big benefit, since the footage could be shared among anyone involved in the project.”

With all pun intended, the sky is the limit for this up-and-coming technology. However, obstacles can interfere with the potential benefits of conducting these drone surveys. For one, seeing these flying drones hovering outside of their windows may make some people uneasy. Also, concern of the drone falling from the sky – due to a malfunction is an issue.
Consequently, drone use is limited in congested city locations where it could be useful. Certainly, the technology is ahead of regulations in this case, and one must use common sense when considering the use of drone technology. That being said, there are still many foreseeable applications for the use of drones in executing inspections. And, at this point, we are only scratching the surface.

Tom Russack is a bricklayer with more than 40 years of experience in the construction trades. He is a senior project manager with Engineered Building Inspections P.C. and holds a master’s degree in historic preservation and management. Contact him at trussack@ebipc.com.