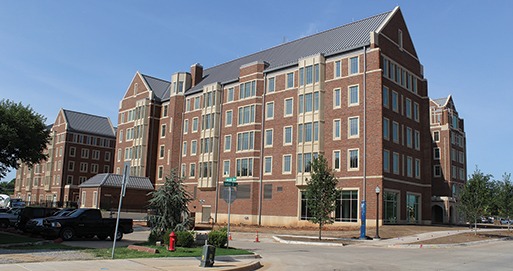 Headington Hall is the culmination of five years of planning, design and construction of a new residential hall for the University of Oklahoma Norman Campus. The building was privately financed by the Intercollegiate Athletics Department to be a new home for student athletes (49% of the occupants), with the rest of the population to be general students.

This six-level, 230,000-square-foot facility provides 384 dormitory beds, academic commons, a dining hall with a private dining room, a game room, media commons, a formal living room and a 75-seat theater. A mixed-use facility, retail space is located on the ground floor as well. The sixth level houses a banquet room with large pre-function spaces, a catering kitchen and an exclusive club room.

The building design was generated by Studio Architecture P.C., located in Oklahoma City, Okla., and consulting architect Newman Architects LLC of New Haven, Conn. University project manager, Dennis Glover, and the director of architectural & engineering services, Michael Moorman, required that the architecture be compatible with the historic “Cherokee Gothic” buildings on campus. This meant designing a masonry veneer of brick and cast stone.

Studio Architecture began working with construction manager Flintco LLC’s Oklahoma City office under the project management of Kirk Mammen to adhere to budget and schedule constraints. During the bidding on the masonry work, great concern over the cost of the work and the quality of the masonry subcontractor was voiced.

On bid day, Sun Valley Masonry out of Phoenix, Ariz., was the low bidder. From Day 1, Sun Valley Masonry had a vision of what this project was going to be. Under the management of Robert “Ducky” Baum, president/owner; Don Voight, stone operations/ coordination; and Jonathan Stone, onsite superintendent, the project started to become a reality.

All the precast stone elements were engineered and fabricated at Oberfield Precast and coordinated by Randy Wheelis. Unique shapes and huge pieces of stone were needed, including four eight-feet-thick x 20-feet-tall pointed arches at the main entry of the building, and soaring gothic spires. Ducky Baum oversaw all of the actual construction and quality assurance, assuring everything was constructed properly.

The building also was mandated to achieve a LEED certification, so the veneer detailing was designed with continuous cavity insulation using adjustable relief angle anchors at each of the floor lines holding the relief angle off the structure. This would allow the insulation to run uninterrupted, except for the anchorage points, effectively thermally isolating the veneer from the rest of the structure and building envelope.

The entire masonry veneer took 15 months to complete with more than one million modular bricks, hand set with cast accents, and four-story-tall cast bay windows around the building perimeter that had exacting tolerances.

The overall impact of Headington Hall, both functionally and architecturally, will reinforce the continued recruitment and attraction of top academic talent as well as high-performing student athletes. Upon completion, Headington Hall assumed its place on the university among the other distinguished building on campus. Sun Valley Masonry has since completed top-notch renovations to the baseball and football stadiums.

Patrick Schoenfeldt is an architect with Studio Architecture P.C. in Oklahoma City, Okla. He can be reached at pschoenfeldt@studioarc.com.