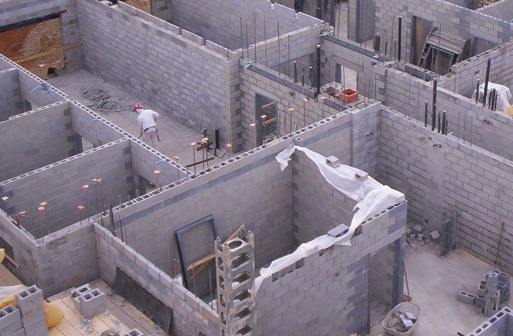 Every year, thousands of Texas families are displaced by multifamily structure fires. The failure of many Texas cities to adopt zoning ordinances, development standards and building codes that require the use of masonry exterior walls and masonry fire walls worsens the fire problem in Texas.

On April 17, 2013, a tragic explosion in West, Texas, displaced dozens of people. The next day, an apartment fire in north Houston displaced nearly 40 residents. Earlier in April, an apartment fire in San Antonio displaced the residents of 27 units. On May 31, a motel fire in Houston resulted in the deaths of four firefighters and injuries to more than a dozen people.

In 2012, according to the Texas State Fire Marshal, there were roughly 1,765 multi-family structure fires statewide, which resulted in an estimated property loss of almost $53.7 million. More than a dozen civilian deaths occurred, about 30 firefighter injuries, and at least 115 civilian injuries. (The Fire Marshal’s data are only approximations, because the reporting system is voluntary; the numbers could be higher, but not lower.) So far in 2013, we appear on pace to match the previous year.
If we assume conservatively that, on average, five people are displaced by each multi-family structure fire, it would total more than 8,800 displaced people, annually, in Texas.

The problem, of course, is not limited to Texas. According to a report for the National Fire Protection Association:

In the world of fire protection, we have a vast amount of data on types of fires, deaths, injuries and property losses. Rarely, if ever, do we see anything – other than media reports – about the thousands of survivors whose lives are turned upside down by multi-family structure fires that spread beyond the room of origin.

Economists, psychologists and sociologists could have a field day analyzing the ripple effects of such a large number of displaced people. Sadly, many of the people affected already are living on the edge. They lose what little they had in these fires.

Unfortunately, this issue seems to receive little attention. This must change. We must fully understand the full toll these catastrophic fires take on communities, because these kinds of fires can be prevented by stronger building codes. 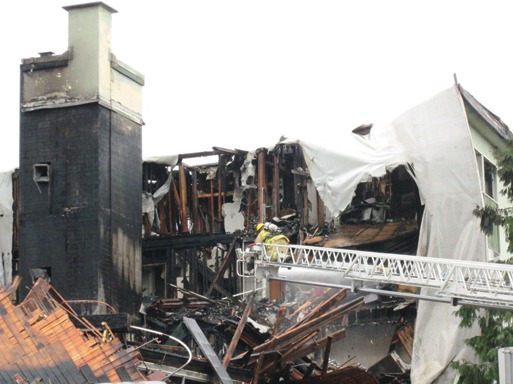 Shown is the aftermath of condos in Vancouver that burned.
Image courtesy of the Masonry Institute of B.C. (Canada)

Fires happen, but the absence of real fire walls allows fires to spread beyond the room of origin. Consequently, dozens of families suddenly can find themselves homeless through no fault of their own.

The national fire report previously referred to also shows that, in apartment fires where fire spread beyond the room of origin in years 2006-2010, structural framing (23 percent) and exterior wall covering or finish (11 percent) contributed the most to fire spread. In other words, these are combustible dwellings.

Let’s build dwellings that actually protect the occupants from fires. The fundamentals of fire safety design are pretty straightforward and practical:

The first two elements are widely accepted and, for the most part, add little cost. A few business groups have fought efforts to require sprinkler systems in new construction due to the cost, but some cities wisely have implemented the requirement anyway.

The International Building Code (IBC) – minimum standards – defines three wall types for fire protection: fire wall, fire barrier and fire partition, depending on the level of protection provided for the type of occupancy and intended use. Of the three defined fire-rated assemblies, a fire wall generally is considered to provide the highest level of robustness and fire safety. As such, it is intended to provide complete separation and must be structurally stable under fire conditions.

The IBC says fire walls must have the minimum fire-resistance rating acceptable for the particular occupancy or use group that they separate, and also must have protected openings and penetrations. A fire wall must have both vertical and horizontal continuity to ensure that the fire does not travel over, under or around the fire wall.

In addition, the wall must have sufficient structural stability under fire conditions to remain standing for the duration of time indicated by the fire-resistance rating, even with the collapse of construction on either side of the fire wall.

The best solution, research has shown, is the masonry fire wall. Actually, the term “masonry fire wall” is redundant, since, for insurance purposes, the only true fire wall is one made of masonry – usually steel-reinforced concrete blocks or bricks. Masonry simply does not burn, and the combination of fire walls and sprinklers can prevent fires from spreading at all.

Developers generally oppose requirements for masonry fire walls. They claim such walls are too costly and are unnecessary. They prefer “fire-resistant” barriers, such as coated wallboard. Unfortunately, such barriers offer little resistance under real-world conditions. They are faux fire walls. The fire rating – a measure of a structure’s resistance to fire – for such barriers further confuse both consumers and developers.

Fire resistance denotes the resistance some materials may provide, yet perform differently in terms of structural integrity. It is a term that litters the regulation of construction and building codes. For example, one-hour rated fire resistance requirement can be achieved using wood stud construction faced with gypsum board on both sides, or with four-inch-thick concrete masonry construction.

The difference in system integrity between the two is apparent, however. Wood-frame construction adds fuel to a fire, while the non-combustible masonry system does not. Masonry walls will continue to provide structural integrity and will work as a barrier.

The case for requiring masonry fire walls for all new multi-family structures (apartments, condominiums, town houses) is so strong, you have to wonder why cities do not require them already. Why don’t builders and developers just do it without the requirement?

Even though studies have shown that the cost difference for a masonry fire wall versus non-masonry fire-resistant barrier is minimal, when considered in the context of total project cost, most developers choose to believe the cost of masonry fire walls is prohibitive.

Moreover, developers, who intend to sell the property within a few years, have little incentive to spend more for masonry fire walls when the building codes don’t require them.

Bottom line: Consumers – renters and townhouse/condominium buyers – need to understand the importance of real (masonry) fire walls, making it clear to developers that this is an important selling point. The public also must keep the pressure on local officials to step up and require real fire walls in all new multi-family structures, so lives no longer are lost or disrupted needlessly by fires that spread beyond the room of origin.