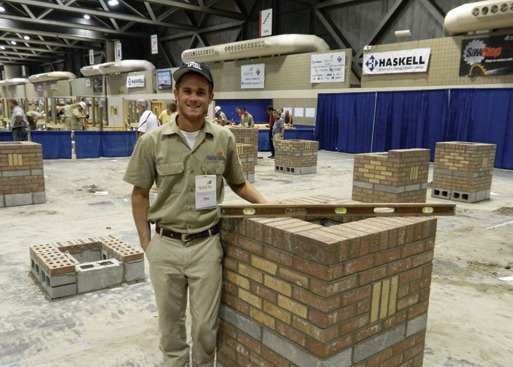 Jacob Fulford twice finished in third place in the secondary division of the National Masonry Contest, held in conjunction with the annual SkillsUSA National Leadership and Skills Conference.
With a surprising lack of disappointment, Jacob says, “I wanted to win the competition, of course; but I’m happy and proud to have done as well as I did. I think it’s neat how it turned out. I won the Florida competition twice and, in my second national contest, there were only three points (out of a possible 1,000) between first place and my third place!”

“I feel like I excelled from the beginning,” says Fulford, “but I really benefitted from the extra instruction I got from ‘Crutch.’”

“Crutch” would be James Crutchfield, who instructed Fulford in high school.

“I was Jacob’s instructor his sophomore and junior years,” says Crutchfield. “I coached him his senior year.”

Prior to Fulford’s senior year, the masonry program at Pedro Mendenez High School was eliminated, and Crutchfield took a fulltime position as the head mason at Castillo de San Marcos, a Spanish fort constructed near St. Augustine in 1672. As such, it is the oldest masonry fort and the only extant 17th Century fort in North America. A national monument, it is operated by the National Park Service.

Crutchfield felt he had a lot invested in his students, so he stayed on as a volunteer SkillsUSA coach, instructing the boys on Fridays as well as evenings and weekends, when the boys desired.

“We had a great team,” says Crutchfield. “I never made them practice. They wanted it. They wanted to get better.

“We won our regionals four years in a row,” he continues. “The last two years, students from our seven-man team placed one, two and three in the Florida State competition. And, of course, Jacob represented us well at two national contests.

“Jacob is a conscientious, hard worker,” Crutchfield adds. “He’ll do anything you ask him to do. He’s energetic and fun to work with. Jacob has come a long way from when we started working together five years ago.”

Fulford and Crutchfield now work together as laborer and supervisor for the National Park Service at Castillo de San Marcos.

In summer 2010, having heard of the SkillsUSA masonry team at the nearby high school, the National Park Service hired all seven masonry students and their instructor for a special project at Castillo de San Marcos. The next summer, the NPS re-hired Crutchfield, Fulford and another student. With the masonry program at Pedro Menendez High School cancelled, Crutchfield stayed on as a fulltime mason, while Fulton returned to finish his senior year of high school.

Crutchfield later recommended Fulford when he was hired as his mason-helper as soon as Fulford returned from the National Masonry Contest in Kansas City, Mo.
“Jacob is in a special student program with the Park Service,” says Crutchfield. “He has his job as long as he stays in school.”

Fulford is upholding his obligation by attending classes two nights a week at nearby St. Johns River State College. He intends to complete his associate degree.
“I really hope to stay in masonry with the Park Service,” says Fulford.

“First, preservation masonry really interests me; and second, I think there’s always going to be work. The National Park Service looks after over 25,000 structures and things are always deteriorating!

“In preservation or restoration masonry,” Fulford continues, “it’s all about figuring out how to make it better without destroying the historical fabric of the structure. You want to be able to see it as it was.”

Crutchfield stresses the importance of authentic materials and tools in historical masonry restoration. “We use hand tools and mortar mixes that are historically accurate to the times. They are different than what we use today.?? Old-timers who used lime-based mixes better understand what we are doing,” says Crutchfield.

“The other important issue in masonry restoration, especially stone work, is knowing what to keep and what to replace,” says Crutchfield. “I was taught by a mobile masonry restoration team from the NPS. I’m passing on what I learned to Jacob.”

Building More: Who Chooses Who
The Fechino Files: So Much...
A Tale Of Three Exterior...
CAREER DAY: The Meeting of...
The Ultimate Meal Prepping Guide:...
Business Building: Do You Have...
Government Affairs
A Look At How CMU...
Historical Masonry: Drayton Hall
Balancing Business Act
Managing Hazcom In Your Business
Preview: September 2021 MCAA Memphis...
2021 WOC MASONRY MADNESS® Recap:...
MasonryStrong Branding Opportunities
Translation: RE-CAPACITACIÓN
Elevating The Brick Experience: Brickworks...
July 2021: Full Contact Project...
The Fechino Files: Summer Is...
Chairman’s Message: Masonry’s Back
Robotic Assisted Lifting
Contractor Tip Of The Month:...
Building More: The Number Behind...
Communication Is Key: Effectively Communicating...
Meal Prep Your Way Into...
6 Ways to Incorporate Technology...
Making The Cut: Saws And...
Growing From Operational: Resources and...
Staying in Shape This Summer
5 Apps to Help You...
On The Level: Working for...