The Environmental Attributes of Bricks

The Environmental Attributes of Bricks

By Charles B. Clark, Jr.

When it comes to durability and maintenance, a clay brick wall is hard to beat. While brick’s service life is projected at more than 100 years, numerous instances exist whereby brick structures have surpassed this benchmark. Properly designed and constructed brickwork will require little maintenance and will not need to be painted or have another coating applied in order to manage moisture.

Today, most brickwork in the United States is installed as a drainage wall with an anchored veneer in front of a structural backing. In a drainage wall, the brick veneer provides the majority of protection against moisture. Any small amount of water penetrating the veneer is directed downward by an air space to the flashing below and out of the veneer through weeps. A water-resistive barrier over the surface of the structural backing keeps moisture out of the substrate.

Environmentally preferable products can be identified through a life cycle assessment (LCA). An LCA is a detailed investigation of the environmental impact of a product through its entire life. Conducting a life cycle assessment of every material in the building envelope is one way to assess the impact of the use of various masonry materials and details. An LCA can be complicated, since it examines numerous environmental effects during the entire life of a building product, from raw material extraction to manufacture, installation, maintenance and building demolition.

An LCA is unique for each product, though data on industry averages is available. To accurately assess a building’s environmental impact, an LCA must be done for every product used in the building. A large amount of data must be collected and assessed, often with the assistance of an LCA consultant. Some computer programs are available using industry average data to perform life cycle assessment such as the ATHENA Impact Estimator for Buildings or the Building for Environmental and Economic Sustainablity software available from the National Institute of Standards and Technology. However, these programs should not be used without a thorough understanding of their limitations.

Life cycle assessment should consider the efficiency of raw material use.
Many manufacturers are creating brick veneer units that are lighter, thinner or both. Such units use fewer raw materials, thus conserving resources and taking less energy to fire, and they are lighter in weight, resulting in lower transportation costs. Life cycle assessment also should consider the efficiency of the design and materials selected. By using modular bricks in the floor plan and elevations, on-site waste can be minimized. By using brick masonry to serve multiple functions such as interior finish, firewall and acoustic isolation, the use of other materials can be avoided.

Bricks can contain recycled content – both post-consumer and pre-consumer.
Non-hazardous waste products such as petroleum-contaminated soil or sludge can be used. Recycled waste from other industries, such as bottom ash and fly ash from coal-fired generators, glass, stone dust and ceramic tile may be incorporated. Reclaimed industrial metallic oxides qualify as pre-consumer recycled materials when used as colorants in bricks. Since fired bricks are inert, bricks can safely encapsulate many materials. When bricks are fired, the individual clay particles are fused together through vitrification.

Since this process cannot be compromised, fly ash is limited to about 15 percent by weight, while the maximum for waste glass is about 2 percent. Some manufacturers have used clay or soil that otherwise would have been considered waste, such as mine overburden and tailings; clay from gravel and sand washing operations; fire clay overburden from coal mining; and excavated soil from swimming pool and road construction. Such materials may be included up to 100 percent of the weight. Mortar can comprise up to 20 percent of brick masonry. A portion of the cement in mortar can be substituted with fly as – a pre-consumer waste product.

The demand for reused/reclaimed bricks is high. The fact that bricks, which, in many cases, were made more than a century ago, can be used again is a testimony to the superior durability. Now, most reclaimed bricks are salvaged from buildings constructed more than 60 years ago. These bricks typically were laid with a mortar made of lime and sand with minimal – if any – portland cement content. This type of mortar was not as strong as contemporary mortars made with portland cement. As a result, when older bricks surrounded with this mortar are extracted from an existing wall, most of the mortar residue can be removed easily during cleaning.
However, mortar that has penetrated the surface of the bricks into the pore structures below is difficult to remove. Consequently, when reclaimed bricks are re-laid, the bond between the mortar and the reclaimed bricks is less than that of bricks that have not been laid in mortar previously.

When using reclaimed bricks, be aware of the different types of bricks available in the early-1900s and the practices common to brick masonry construction at that time. Bricks from this era were made primarily in periodic and scove kilns. Unlike contemporary tunnel kilns in use today, greater temperature variations were present in the kiln when the bricks were fired, resulting in bricks with a wide range of properties – from over-burned bricks (“clinkers”) and hard-burned bricks, to under-burned bricks (known as “salmons” due to their usual pinkish-orange color).

The prevalent method of construction, at the time, made use of all these bricks, consisting of load-bearing brick walls at least 12 inches thick. The hardest, most durable units were placed in the exterior wythes; the salmons (and others) were used for wythes inside the wall and were not exposed to the weather. As a result, when bricks are salvaged from buildings of this era, it is important to separate bricks taken from interior wythes from others. Salmon bricks should not be exposed to weather.

Made of natural, renewable resources

Oxygen, silica, alumina, and iron – the elements that make up the clay and shale used to make bricks – are the four most abundant elements in the Earth’s crust. Soils made of these elements are not viable for agriculture without adding fertilizers and supplements. Most brick plants use material from the same pit extracted through multiple soil layers for at least 50 years, thus minimizing the impact to the surface area. Conveyors and other power equipment typically are used to transport the clay from the mine to the plant. Storm water runoff from clay pits is controlled by regulations from the Mining Safety and Health Act. Manufacturers typically use settling ponds, filtration and catch basins to limit suspended solids. Dust is controlled by spraying organic, biodegradable oils or water.

Additionally, nearly all of the mined, raw materials result in finished brick product. More than 95 percent of all the mined clay and shale goes to the plant, and an average of only 3.5 percent of the manufactured product ends up as scrap, most of which is returned to the manufacturing process. Once a pit’s material production has subsided, mined areas are reclaimed for future use by replacing overburden and topsoil, so the resulting property can be used for a wide variety of functions. In this way, valuable clay and shale resources are obtained, while allowing for land to be reused for a different purpose later.

The average amount of energy to extract raw materials and manufacture and deliver bricks has decreased significantly. Circa 1970, around 4,000 Btu per pound of bricks was required. The current industry average is about 1,240 Btu per pound. When considered with the intrinsic durability present in bricks, which will last for more than a century, the environmental impact is lower, due to its distribution during a long life. 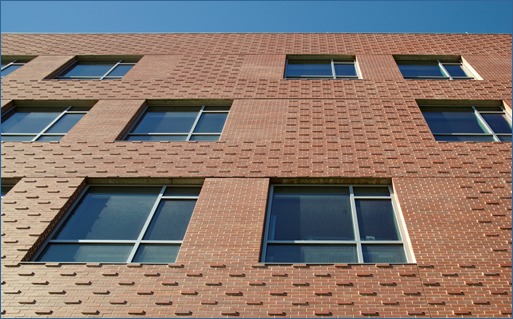 Bricks are made from the non-organic minerals mentioned earlier. As such, they do not contain carbon-based materials. Bricks do not contain highly toxic compounds. Tests to evaluate the encapsulation of potentially damaging chemicals in waste materials have shown that no toxic compounds are leached from bricks. A brick is a 100 percent inorganic, inert material. Firing bricks with natural gas or coal will produce some emissions, which are well documented and controlled by state and national regulations. The brick industry recognizes the need for compliance with these regulations for clean air and the environment. Air emissions are minimized with controls such as scrubbers installed on kiln exhausts.

Lime waste that accumulates in scrubbers often is recycled as a beneficial additive to soil. Dust in brick plants is controlled through the use of filtering and containment systems, vacuums, additives and water mists. Even vehicular emissions are being addressed, with brick manufacturers monitoring truck emissions; recycling waste oil, antifreeze and hydraulic oil; and regulating truck speeds for improved fuel efficiency.

Most bricks are manufactured from materials obtained from within a few miles of the manufacturing plant. The average distance that raw materials travel to a plant is 15 miles. Brick manufacturing facilities are located in 38 states across the country and close to urban areas. In the 50 largest metropolitan statistical areas (MSAs) in the United States, more than 25 plants exist within 500 miles of each, and at least two brick plants exist within 500 miles of 49 MSAs. More than 70 percent of these MSAs have at least one plant within 200 miles.

During the manufacturing process, any raw bricks, fired bricks, or scraps are recycled back into the production stream. Scrap bricks and bricks from demolition can be crushed and recycled into new bricks, or used as brick chips for landscaping, baseball diamonds and tennis courts. Recycled bricks also can be used as sub-base material for pavements, on quarry roads, or even as aggregate for concrete. When underground utilities must be accessed in pavements with sand-set clay pavers, the pavers can be removed, stockpiled and reused. Reclaiming bricks in the future is possible but may prove difficult, due to the portland cement used in contemporary mortar that increases the mortar strength, making it harder to remove from bricks.

Most refurbished buildings are constructed of brick masonry. Renovating these structures not only conserves product resources, but also extends the life of the existing building stock and diverts demolition waste. In addition, many culturally significant buildings such as courthouses, libraries, schools and town halls are made of bricks.