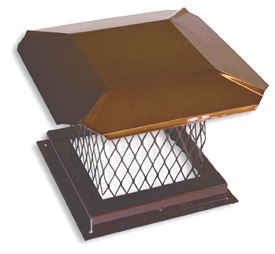 Quite simply, a chimney cap is the least-expensive preventative measure one can take to protect a chimney from deterioration and keep it operating properly. The benefits of a properly sized and installed cap include keeping out weather, such as rain and snow, and animals, such as raccoons and birds. A devious raccoon entering through an open chimney can cause immeasurable damage to the interior of a home.

The uncovered chimney that allows rain and snow to enter eventually will deteriorate and, ultimately, will deem the chimney unsafe to use until costly repairs are made. Additionally, a cap can prevent downdrafts while the fireplace is in use, making the fire burn more safely and efficiently.

There are many options to choose from when deciding which type of professional grade chimney cap to install, from both a performance standpoint and an aesthetic preference. Codes dictate the screen or mesh opening dimensions, depending on where in the country it is installed.

For example, a cap with a screen opening of 5/8-inch is required in most of California and parts of Nevada, because it will serve as a better spark arrestor in these areas where wild fires are a major concern. In most other areas of the country, a 3/4-inch mesh is used, because it is less likely to become clogged up with soot or ice. Another performance factor to keep in mind is that codes dictate a minimum of eight inches of clearance height between termination of the chimney and the bottom of the chimney cap lid to prevent restriction of the flue gasses.

Alternatively, a “single flue” mounted cap is installed when there is extending clay flue tile protruding from the crown of the chimney. The cap is made with a frame that fits directly over the flue tile and is fastened with friction screws to the side of the flue tile. An important thing to consider in this situation is the distance between flue tiles, in the event multiple caps are being installed. There are typically at least 3.5 inches of overhang on each lid, so at least seven inches of space needs to exist between flues. If there is less space, a crown mount cap will be needed.

Aesthetically, homeowners can choose from caps made from stainless steel, which usually carry a lifetime warranty, or galvanized steel, which are typically painted black but only carry a limited warranty. Copper is another common material used to dress up the appearance of the chimney, but it comes at a premium price point.

Bernard Dalsin Manufacturing has introduced an exclusive copper-powder-coated chimney cap that provides the appearance of copper at a fraction of the price of actual copper. Under this copper-powder coat is a chimney cap made from stainless steel, so it carries with it the lifetime warranty. Many manufacturers of professional grade caps will actually make custom chimney caps to suite the distinctive homeowners’ tastes. Custom caps are sometimes made to resemble clay chimney pots, typically installed on homes with dramatic rooflines and tall distinct chimneys protruding from the roofline.

Although custom caps can be made to limitless design specifications, it is important that all codes and performance standards are maintained. Finally, one can purchase “wind directional” chimney caps, which can be aesthetically pleasing, and provide the function of assisting the flow of flue gasses out of the chimney. These caps will usually swivel to the direction of the wind, thus providing a wind barrier and allowing the smoke to exit the chimney without competing with a strong crosswind. There is one downside to these caps, in that the moving parts can become seized from the buildup of soot or the formation of ice, so periodic inspection and cleaning are important.

My position is that every masonry or chimney service contractor should include professional-grade chimney cap installation as part of the service. When the benefits are properly explained, this is the no-brainer, add-on sale for any homeowner with a masonry chimney.