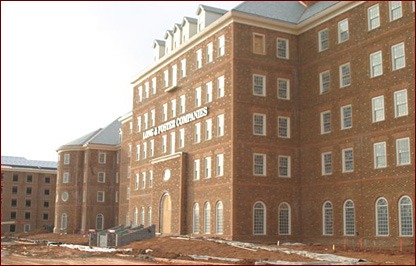 When leaders at the Long and Foster Companies decided to build a new corporate headquarters just outside of Washington, they wanted their Georgian-style building to look as if it had been around for centuries. They chose oversized, handmade bricks that were made using techniques dating back 300 years, to the days before the nation’s capitol city and its namesake.

“There was a day when everybody made brick by hand,” says Tom Sheridan, masonry specialist at distributor Potomac Valley Brick. “Now, there are only five or fewer companies making brick this way.”

This bricks, which are four X 2 3/4 X 8 1/2 inches in size, are worth a closer look. “When examining these bricks up close, in many instances you can see handprints and finger marks from where the brick maker was handling each brick,” says Paul Ely of Redland Brick Inc., which made the bricks.

The 287-square-foot headquarter building in northern Virginia, scheduled for completion in May, called for a large brick. “The building is such a large structure that we felt we needed a brick that had a lot of character,” says Thomas O. Nutt III, VP of land acquisition and development for Long and Foster Companies.

The order from Redland Brick Inc.’s nearby Cushwa plant is the largest order of handmade brick for a single building that anyone involved can recall. The company makes 60 million bricks a year, 5 million of which are handmade.

“The Cushwa plant is the largest continually operating brick-making facility in the country,” Sheridan says. “When our plant originally opened in the 1800s, our brick were placed on barges and sent down the C&O Canal and Potomac River into Washington, D.C., where they were used on many historic buildings and residences.” 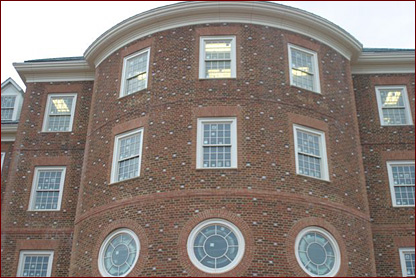 Anatomy of a handmade brick

The brick starts out as a mixture of clay and shale, ground together and mixed with water by machine to produce measured lumps of clay. The clay is rolled in special sand to add color and texture before being dumped into wooden mold boxes by hand.

“The faces of the brick have unique folds and creases, unlike any brick made by a machine process,” Ely says. “The same process gives our brick its rich and vibrant color. Our process is authentic to the principles used for more than 300 years in making brick by hand.”

After the brick is pressed into the mold boxes, the boxes are dumped onto trays to allow the brick to dry before it is set on kiln cars by hand and fired at temperatures of more than 2,000 degrees. The high temperatures bring out the unique ranges of color associated with handmade brick. The brick are fired in kilns for more than 40 hours before being packaged by hand in cubes and sent to jobsites nationwide.

In this case, the brick didn’t far to travel. The trick, though, was planning carefully to assure that supply stayed ahead of demand.

“That’s where it got to be fun,” Sheridan says. “We started out with a 12-week lead time with nearly 200,000 bricks on the job ready for them when they started,” he says. “We made the last run of brick just as they were doing the site walls. There may have been some nervousness on the part of the general contractor, but there was never any nervousness on the part of the masonry contractor, Cushwa or us.”